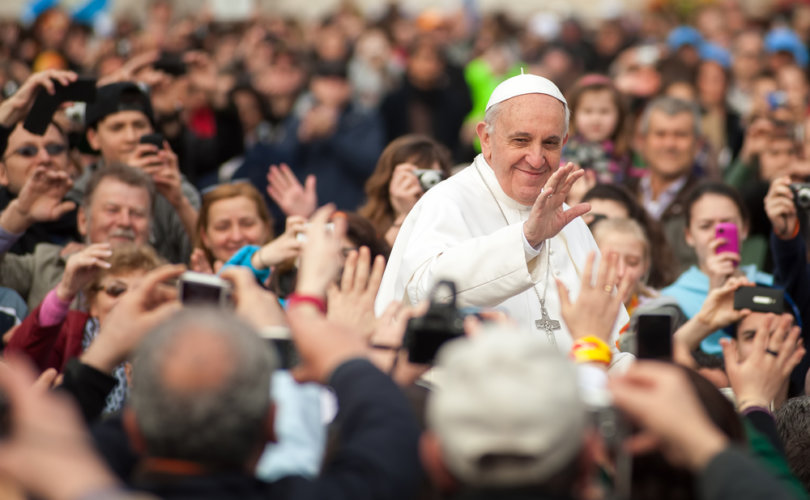 March 2, 2017 (CatholicCrisis) — Something snapped last Friday, when Pope Francis used the day’s Gospel reading as one more opportunity to promote his own view on divorce and remarriage. Condemning hypocrisy and the “logic of casuistry,” the Pontiff said that Jesus rejects the approach of legal scholars.

True enough. But in his rebuke to the Pharisees, what does Jesus say about marriage?

So they are no longer two but one flesh. What therefore God has joined together, let not man put asunder.”

Day after day, in his homilies at morning Mass in the Vatican’s St. Martha residence, Pope Francis denounces the “doctors of the law” and the “rigid” application of Catholic moral doctrine. Sometimes his interpretation of the day’s Scripture readings is forced; often his characterization of tradition-minded Catholics is insulting. But in this case, the Pope turned the Gospel reading completely upside-down. Reading the Vatican Radio account of that astonishing homily, I could no longer pretend that Pope Francis is merely offering a novel interpretation of Catholic doctrine. No; it is more than that. He is engaged in a deliberate effort to change what the Church teaches.

For over 20 years now, writing daily about the news from the Vatican, I have tried to be honest in my assessment of papal statements and gestures. I sometimes criticized St. John Paul II and Pope Benedict XVI, when I thought that their actions were imprudent. But never did it cross my mind that either of those Popes posed any danger to the integrity of the Catholic faith. Looking back much further across Church history, I realize that there have been bad Popes: men whose personal actions were motivated by greed and jealousy and lust for power and just plain lust. But has there ever before been a Roman Pontiff who showed such disdain for what the Church has always taught and believed and practiced—on such bedrock issues as the nature of marriage and of the Eucharist?

Pope Francis has sparked controversy from the day he was elected as St. Peter’s successor. But in the past several months the controversy has become so intense, confusion among the faithful so widespread, administration at the Vatican so arbitrary—and the Pope’s diatribes against his (real or imagined) foes so manic—that today the universal Church is rushing toward a crisis.

In a large family, how should a son behave when he realizes that his father’s pathological behavior threatens the welfare of the whole household? He should certainly continue to show respect for his father, but he cannot indefinitely deny the danger. Eventually, a dysfunctional family needs an intervention.

In the worldwide family that is the Catholic Church, the best means of intervention is always prayer. Intense prayer for the Holy Father would be a particularly apt project for the season of Lent. But intervention also requires honesty: a candid recognition that we have a serious problem.

Recognizing the problem can also provide a sort of relief, a relaxation of accumulating tensions. When I tell friends that I consider this papacy a disaster, I notice that more often than not, they feel oddly reassured. They can relax a bit, knowing that their own misgivings are not irrational, that others share their fears about the future of the faith, that they need not continue a fruitless search for ways to reconcile the irreconciliable. Moreover, having given the problem a proper name, they can recognize what this crisis of Catholicism is not. Pope Francis is not an antipope, much less the Antichrist. The See of Peter is not vacant, and Benedict is not the “real” Pontiff.

Francis is our Pope, for better or worse. And if it is for worse—as I sadly conclude it is—the Church has survived bad Popes in the past. We Catholics have been spoiled for decades, enjoying a succession of outstanding Vatican leaders: Pontiffs who were gifted teachers and saintly men. We have grown accustomed to looking to Rome for guidance. Now we cannot.

(I do not mean to imply that Pope Francis has forfeited the charism of infallibility. If he issues an ex cathedra statement, in union with the world’s bishops, we can be sure that he is fulfilling his duty to pass on what the Lord gave to St. Peter: the deposit of faith. But this Pope has chosen not to speak with authority; on the contrary, he has adamantly refused to clarify his most provocative teaching document.)

But if we cannot count on clear directions from Rome, where can we turn? First, Catholics can rely on the constant teaching of the Church, the doctrines that are now too often called into question. If the Pope is confusing, the Catechism of the Catholic Church is not. Second, we can and should ask our own diocesan bishops to step up and shoulder their own proper responsibilities. Bishops, too, have spent years referring the tough questions to Rome. Now, of necessity, they must provide their own clear, decisive affirmations of Catholic doctrine.

Maybe Pope Francis will prove me wrong, and emerge as a great Catholic teacher. I hope and pray he does. Maybe my entire argument is wrongheaded. I have been wrong before, and will no doubt be wrong again; one more mistaken view is of no great consequence. But if I am right, and the current Pope’s leadership has become a danger to the faith, then other Catholics, and especially ordained Church leaders, must decide how to respond. And if I am right—as I surely am—that confusion about fundamental Church teachings has become widespread, then the bishops, as primary teachers of the faith, cannot neglect their duty to intervene.