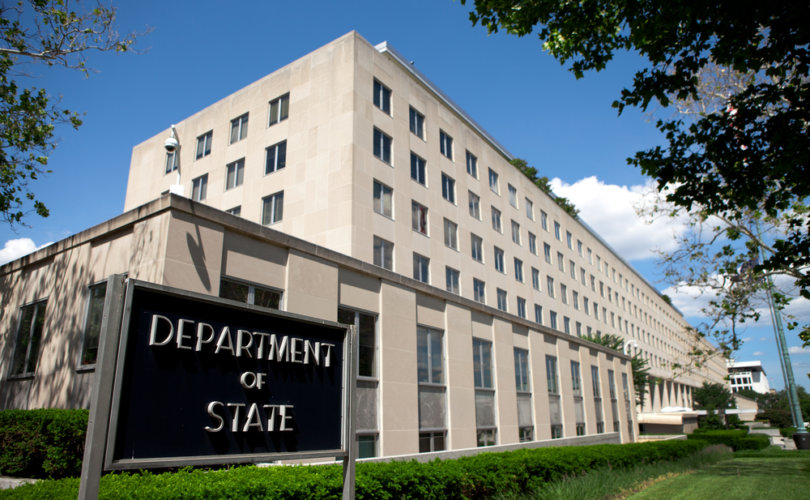 February 5, 2019 (LifeSiteNews) — Last month, President Donald Trump lost one of his most loyal and effective political appointees at the State Department when Mari Stull presented her resignation.

Stull was appointed by President Trump as Senior Adviser to the Bureau of International Organization Affairs in April 2018. The official role of the Bureau of International Organization Affairs (IO) is to advance “the president’s vision of robust multilateral engagement as a crucial tool in advancing U.S. national interests.” In practice, Stull's job was to review the positions at different international organizations and aid the president in appointing and supporting candidates to those positions that advanced U.S. interests according to the president's foreign policy.

However, because of Stull's loyalty to the President's vision, she quickly became a target of the globalist “deep state” and the treasonous “resistance.” Of special concern to the “deep state” and their mouthpieces in the liberal media was Stull's work to implement the Mexico City Policy against the use of taxpayer funding of abortion as well as her role in the United States' opposition to the radically pro-abortion socialist Michelle Bachelet for the position of UN High Commissioner for Human Rights. She was also accused by anonymous leakers within the State Department in a Politico article of attempting to stop the official use of the term “sexual and reproductive health” and “comprehensive sexual education,” which are both known to be euphemisms for pro-abortion policies.

By the summer of 2018, a host of coordinated attacks, led by a team of reporters from Foreign Policy and Politico, began to surface. The anonymous accusations against Stull first published in Foreign Policy and Politico were then repeated by most major political publications as fact. The stories, which cited anonymous “senior diplomatic” sources within the state department, did not provide any specific examples of any wrongdoing by Stull, but expressed vague complaints such as that she was “gunning for American citizens in the UN to see if they are toeing the line.” Shortly after the initial liberal press reports were published in June 2018, Stull then became the subject of a congressional investigation from Democrats in the House of Representatives intended to intimidate her. The letter from liberal Representatives Eliot Engel, Elijah Cummings and the notorious Sen. Robert Menendez dated June 18 refers to the Foreign Policy article as its only source to accuse Stull of compiling lists of those officials in the State Department that were loyal to the president.

The anonymous sources cited by the original Foreign Policy article echoed complaints from the bureaucracy that Stull and her boss, Moley, had “impeded the bureau’s day-to-day work by keeping career officials out of some meetings with foreign counterparts, a break from accepted practice, and refraining from briefing them on the outcomes.” This is a risible claim coming from government officials actively leaking information to the press in order to undermine the president's policy.

Stull's case is a perfect example of how the “deep state” works with its allies in the media and in the Democratic party to retain power and push their own globalist policy preferences, while remaining completely immune to the vicissitudes of elections.

The marriage between the deep state, the media and the Democrat party is not a hidden conspiracy. A simple donor search on the OpenSecrets.org website, which lists political donations for purposes of transparency, shows that the Managing Director of Foreign Policy magazine, Claire Casey, has donated 39 times for a total of almost $7,000 exclusively to Democrats since 2016. The top beneficiary of her donations, not surprisingly, was Hillary Clinton. A search of the employees of the company that owns Foreign Policy, Graham Holdings Company, shows an equally partisan result, with all but one of their employee's donations going to Democratic candidates, and top among the beneficiaries of their donations is the socialist Bernie Sanders. It is also no surprise that Politico carried, and amplified all the content being published by Foreign Policy, after all, the Publisher of Foreign Policy, Andrew Sollinger, was previously in charge of Politico New York.

Perhaps the most striking aspect of how the “deep state” was able to purge Trump supporters like Stull from government is that the leakers themselves were the ones supposed to be apolitical and yet were the most guilty of weaponizing the diplomatic corps. Through uncorroborated leaks, they were able to target political enemies like Stull, who had been appointed to stand up to the unaccountable entrenched globalist interests. Unlike the career bureaucrats who accused her of being political, Stull was a political employee, not a career diplomat, and she had a mandate to implement the president's foreign policy agenda. Her job was to help the president realize his foreign policy agenda through the selection of appropriate personnel. According to the leakers themselves, her great crime was that she was being too successful, and therefore she became a special target. It is shameful that those with the power to defend Stull were silent as she was being persecuted.

In his speech before the United Nations General Assembly, President Trump criticized the “ideology of globalism” and a foreign policy that surrenders America's “sovereignty to an unelected, unaccountable, global bureaucracy.” Instead, the president cast a foreign policy vision of an “America (that) is governed by Americans,” concluding that “We reject the ideology of globalism, and we embrace the doctrine of patriotism. Around the world, responsible nations must defend against threats to sovereignty not just from global governance, but also from other, new forms of coercion and domination.”

Since her appointment in April 2018, Stull had been one of the most effective ambassadors of President Trump's policies at the Department of State, especially with regards to family, life and religious liberty. The details of how the foreign policy establishment achieved Stull's resignation is a perfect example of how the globalist civil servant class have managed to completely evade their responsibility of carrying out the will of the people who elect the political leaders of this nation.

Until the nation rids itself of the globalist cabal inside the bureaucracy, the partisan media, and the political class, the United States will not truly be a sovereign nation. Until that point, the cultural and economic marxism will continue to eat away at the social fabric that made America great.

Gualberto Garcia Jones is director of International Human Rights Group and Special Advisor to the Holy See Mission to the Organization of American States.