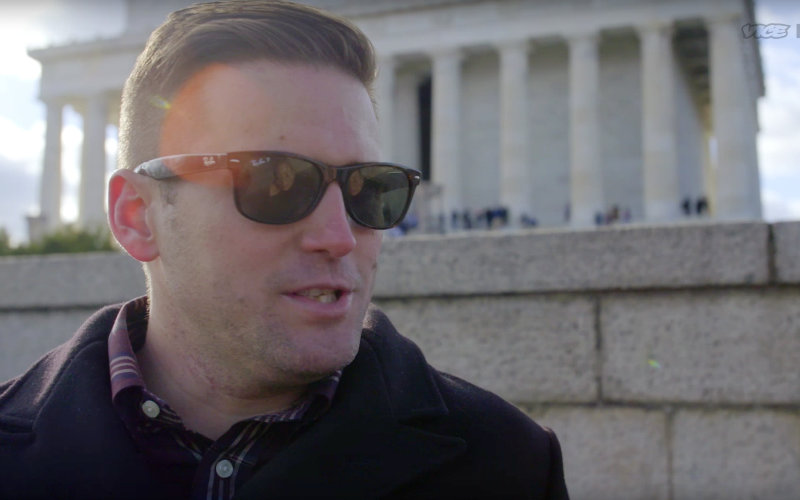 March 21, 2017 (TheBridgehead) — For those of you wondering why I’m writing another column about the alt-right, the reason is simple: Every time I do, people comment to explain why I’m wrong. Those people, some of whom I used to know, are starting to buy what the alt-right is peddling. Some of them are brazen enough to inform me that I, as an active social conservative, should be “smart enough” to realize that “the Jews,” whom they somehow believe to be a homogenous and monolithic group, are responsible for all of the evils Western civilization faces. One of these people even wrote that Richard Spencer had “opened his eyes.”

For those of you who are fortunate enough not to have heard of him, Richard Spencer is the neo-Nazi who runs AltRight.com and has been attempting to hijack the conservative movement by cheerleading Donald Trump while promoting the same weird racial theories that gave rise to the Third Reich. He showed up uninvited at the Conservative Political Action Conference, palled around with Milo Yiannopoulos before Milo’s comments excusing man-boy sexual relationships (which were apparently too much for even him), and recently released a video bemoaning the treatment of The Blaze’s Tomi Lahren, the supposedly courageous commentator who conveniently chose The View to do an about-face on abortion.

In the video, Spencer mused that Lahren might be the alt-right’s “hope,” since many conservatives have turned on her over the abortion issue—and, he couldn’t help but point out, she was blond. Spencer then launched into a monologue on abortion, which should forever silence those conservatives who feel the bizarre temptation to flirt with the alt-right and smash the asinine idea that any compatibility exists between these two ideologies:

I think that some people who are…in the alt-right want to believe that the anti-abortion crusade is just inherently traditionalist, that it is about making women take responsibility for their children, that it’s going to make women become mothers whether they like it or not…I am a bit sceptical of this view that abortion would have inherently traditionalist consequences. I think when we think about abortion we often think about these careerist women who otherwise would be part of families but are instead having abortion out of pure selfishness and greed. The fact is that it isn’t like that. Those highly intelligent career women will have abortions on occasion, but to be honest they’re using contraception and they’re avoiding pregnancy, is what they’re doing…The people who are having abortions are generally very often black or Hispanic or [people] from very poor circumstances, to be honest.

In case you missed it, Spencer can’t be opposed to abortion in all circumstances because he quite likes the idea that a lot of African Americans and Hispanics are having abortions. This is a common idea on the alt-right—Alymer Fisher wrote a long column warning his fellow alt-righters against succumbing to “the pro-life temptation” for precisely this reason. It’s not families we care about, he warned—it’s white families. Back to Spencer:

And so the anti-abortion crusade becomes this ‘human rights’ crusade. And if you look at the writing of people like Ramesh Ponnuru (of National Review) it is directly associated with this…that every being that is human has a right to life and so on. Well that’s not how we think as identitarians, to be honest. You are part of a community, you’re part of a family, you’re part of a collective. You do not have some human right, some abstract thing given to you by God or by the world or something like that. You’re part of a community and that’s where you gain your meaning or your rights. The anti-abortion crusade is often associated with family, the traditional family, but to be honest it’s descended into not just a human rights dogma but a kind of dysgenic “we are the world” dogma.

If it weren’t all so grotesque, it might actually be funny that hardcore far-right kids are getting sucked into the alt-right, considering that Spencer’s trash theory simply replaces Marx’s utopian collective with a racial collective. Communists gave us the gulags and fascists gave us the concentration camps, with plenty of overlap. Richard Spencer has handily highlighted one of the most overlooked aspects of alt-right ideology: In their view, you have no rights. Human rights don’t exist. God doesn’t, either, for that matter. (Dysgenic, by the way, refers to promulgating undesirable traits by allowing “lesser specimens” to reproduce, in case you weren’t clear on what Spencer’s opinion of non-white people was.) Spencer goes on:

The most popular propaganda line for the pro-life movement is about “black genocide,” how this is “destroying black communities” and indeed is a racist plot by Margaret Sanger and so on. This gets to something that I think is a bigger point, and that is that the alt-right or identitarians, we can’t think about these issues in this kind of good or evil binary. We actually have to think about an issue like abortion…in a complicated manner, something that that issue deserves. Lothrop Stoddard talked about contraception, not so much abortion but contraception, as a potentially world-changing—for the good—technology, or something that could change the world for the worse. In a way he was absolutely right and I think contraception has to a large degree changed the world for the worse. Intelligent people will engage in family planning because they naturally have long time horizons, they think ahead. They aren’t just going to go run and have sex with someone without a condom and get them pregnant and so on…In a way, contraception has been terribly dysgenic in the sense that it is only the smart people that really use it. Smart people are not using abortion as birth control. Smart people are using abortion when you have a situation like Down Syndrome or you have a situation where the health of the mother is at risk. I would say that it is the unintelligent and blacks and Hispanics who use abortion as birth control, as a kind of late-term birth control

Lothrop Stoddard, in case you were wondering, is a long-dead eugenicist and Klansman who felt that “coloured people” posed a danger to “white civilization,” and is now resurrected so that neo-Nazis like Spencer can fangirl him. When Spencer does have a problem with abortion, as with contraception, it’s only because the wrong people are using it. White people, apparently, are so smart they’re not replacing their own population, which is of great concern to those obsessed with the promulgation of certain pigmentations. Spencer warns that this is doing great harm to the “white race”:

We need to recognize this potential for both good and evil or good and bad within contraception itself, that this is something that can be a great boon for our people, for our race, or it can be a great detriment. Contraception has been a great detriment because precisely the people who shouldn’t be using it are using it. We want smart people to have more children. I sometimes want smart people to be a little more reckless. Don’t plan. Don’t use a condom. What I’m saying basically is the abortion issue is just a much more complicated issue than this kind of “good or evil” binary that the pro-life movement and the Christian movement want to use. We need to be more adult than they are.

I just want to point out, for the second time, that the alt-right is incompatible with Christianity. You don’t even have to take my word for it, take Spencer’s. He finishes off his little rant with a welcome repudiation of the pro-life movement:

We should recognize that the pro-life movement—this is not the alt-right, this has nothing in common with identitarians, and I think we should be genuinely suspicious of people who think in terms of human rights and who are interested in adopting African children and bringing them to this country and who get caught up on this issue. We want to be a movement about families, about life in a deep sense, not just “rights” but truly great life, and greatness, and beautiful, flourishing, productive families. We want to be eugenic in the deepest sense of the word. Pro-lifers want to be radically dysgenic, egalitarian, multi-racial human rights thumpers—and they’re not us.

Amen to that—we most certainly are not. Spencer’s little rant is valuable, because it is brutally honest. Those who adopt children of a different race are race traitors. Those who believe in human rights cannot be part of the alt-right because some humans will have to be sacrificed for the good of the white collective. And just as in Nazi Germany, not even all white children will be safe, because the alt-right believes in eugenics—as Spencer mentioned earlier, smart people abort children with Down Syndrome. What Spencer has just described here is basically the Nazi idea of an Aryan super-race. It’s hard to accuse someone of being a Nazi when they own the title so thoroughly.

I hope this reveals, yet again, why conservatives can find no common ground with the alt-right. I hope this explains why I find it so reprehensible and disgusting that commentators like Gavin McInnes are willing to give Richard Spencer a platform—and multiple times, too. Conservatism is going through a time of upheaval, and we have to be extraordinarily vigilant. The alt-right is attempting to infiltrate the mainstream, using people like McInnes, and Milo, and others. If they manage to do it, conservatism is going to need chemotherapy.