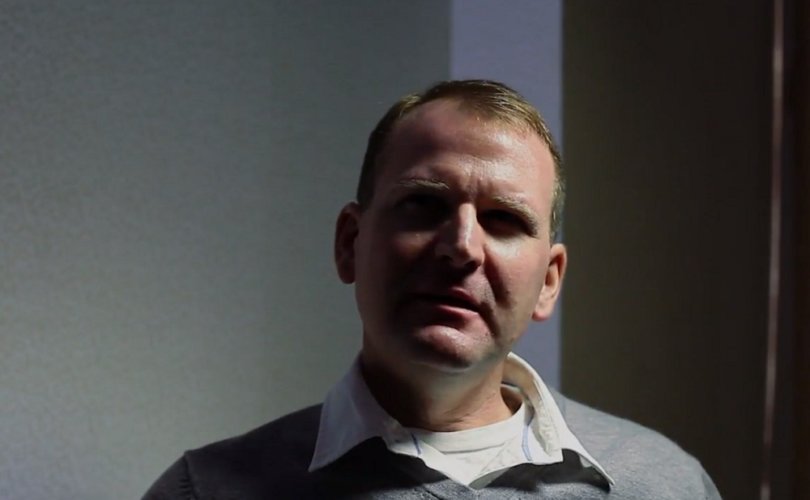 March 2, 2020 (CatholicCulture.org) — Joseph Sciambra is an angry man. He has plumbed the depths of the homosexual subculture. He has suffered for his involvement in promiscuity, pornography, drug abuse and self-abuse. He is still paying the price, in physical and psychological suffering. He has watched one friend after another die of AIDS. Now, having rediscovered his Catholic faith and reformed his life, he watches in frustration as Catholic priests encourage young men to explore the same path that nearly led him to ruin, and Catholic bishops refuse to intervene.

In his book Disordered [Amazon carries only the Kindle version; hard copies are available through the author’s web site], Sciambra tells how he became immersed in the reckless life of San Francisco’s notorious Castro district. In sometimes graphic detail he describes the degrading sexual practices that were accepted there — practices that were driven by emotional desperation. (This book will stay on a high shelf; I would not want impressionable young people to discover this sort of moral squalor.) In full confessional mode, Sciambra does not spare himself; he details his own sins. At the same time he manages to give the reader a strong sense of how horribly unhappy he was. This book vividly illustrates how serious sin leads to a life of desolation.

Finally this self-destructive young man reaches a point of no return. His health breaks down completely; he is near death, and not terribly interested in staying alive. But he calls out for help, his mother responds, and he begins the long road to physical recovery and moral reform.

For this reader, the spiritual conversion came just in time; I could not have stomached much more of the gut-wrenching tour through a world of joyless perversion and exploitation. But Sciambra’s story is not over by any means.

For one thing there is the story of the conversion itself. It is always fascinating to see how the “Hound of Heaven” chases down an errant soul. In Sciambra’s case, there is the gradual realization that for all of his life he has longed for an intimate relationship with a man he can admire and trust, until at last he encounters the God-Man who alone can fill that aching need.

But there is more to it, unfortunately. Sciambra cannot forget that when he first began to explore the homosexual life, he was encouraged by Catholic priests.

I will never forget how, during a failed dinner party intervention organized by my parents, the habitually happy priest they invited to set their wayward son on the right path — patted me on the back and said I was doing just fine; I belonged in the Castro with those who understood me.

This was not an isolated incident. On several occasions, priests to whom young Sciambra turned for counsel gave him the same sort of advice: to embrace his homosexuality, to continue doing the very things that were torturing and corrupting his soul.

Sad to say, the pattern continued after his conversion experience. Recovering his faith, his health, and his sanity, he stayed for a while with a religious community — and discovered the homosexual subculture there. When he reported the problem to Church officials, expecting some quick response, he was sorely disappointed.

At best, the response I received was one of cold suspicion… In the all-male gay community, I could not find a single man; in the all-male hierarchy of the Catholic Church, I discovered the same dilemma. For a minute, I considered walking away. This isn’t worth it. But, where could I go? The anguish I endured in the Catholic Church surpassed that which I experienced in the Castro.

And it continues to this day. Spurred on by the zeal of a convert and by the memory of friends who died miserably of self-inflicted diseases, Sciambra has taken it upon himself to act as a missionary to homosexuals. He travels back to Castro, distributing rosary beads. He goes to Gay Pride parades and tells participants that Jesus loves them. He tries, in his own unconventional ways, to spread the healing message of the Gospel. And he is angry, because he receives no help from the Church he loves.

Worse than that: he encounters opposition — not just occasionally but consistently. Bishops who endorse the subversive message of Father James Martin will, of course, not take the time to speak with Sciambra. But other bishops — those with a reputation for orthodoxy — avoid him as well. He is a pariah.

So Sciambra has taken his cause to the internet. With a very active presence on social media, he denounces the gay subculture within the Church and the negligence of the hierarchy that enables that subculture to flourish. He does not pull his punches.

Before I started this outreach, I thought my struggle would be with the secular gay community. No, that has not been the battle front. There is a gay civil war in the Church. Those that stand up for truth are few and ill-equipped; we have almost no support from the hierarchy. Meanwhile the gay-affirmative side controls entire parishes and LGBT ministries in almost every major archdiocese… they also determine who speaks at the largest gathering of Catholics in the United States: the Los Angeles Religious Education Congress.

Disordered is an odd book which, to be frank, could have benefited from the work of a good editor. There are some syntactical errors, some repetitious passages, and some overall problems with organization of the material. But the raw presentation also sometimes conveys a sense of urgency that enhances the power of the presentation.

After telling his life story, Sciambra adds a number of essays, all involving the challenges of dealing with homosexuality. By the end, the author’s message is abundantly clear. But the final essay in the book is another autobiographical account, of a very different nature. Sciambra tells how he and his father narrowly avoided death in a forest fire. The tale of his frantic, last-ditch escape — literally driving through the flames — furnishes a stirring conclusion to the book, and a fitting metaphor for Sciambra’s life.