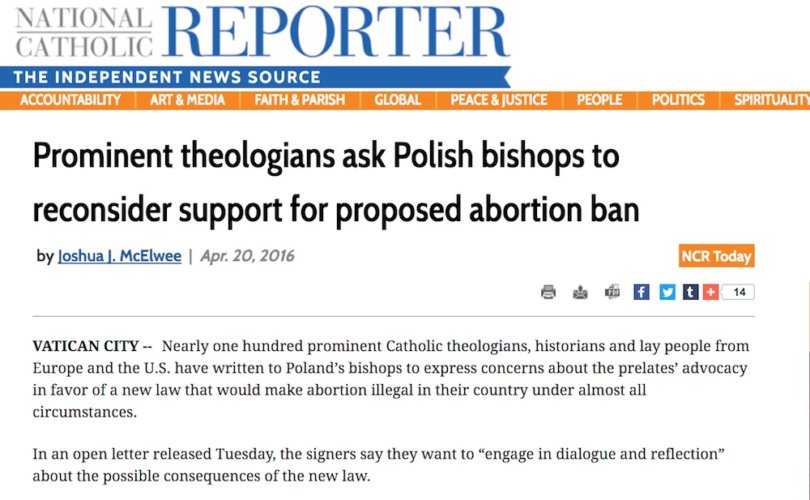 April 21, 2016 (LifeSiteNews) – The National Catholic Reporter, a dissident American Catholic newspaper, would like its readers to think that, in an open letter, “Prominent theologians ask Polish bishops to reconsider support for proposed abortion ban.” But is it true?

It depends on how you understand “prominent.” It also depends what you mean by “theologians.”

“Nearly one hundred prominent Catholic theologians, historians and lay people from Europe and the U.S. have written to Poland’s bishops to express concerns about the prelates’ advocacy in favor of a new law that would make abortion illegal in their country under almost all circumstances,” the National Catholic Reporter wrote. The letter refers to the bishops’ support for the abortion ban, a bill initiated by Polish pro-life citizens.

The newspaper does not publish the list of signatories, but it is to be found in the pro-abortion press in Poland. Polish left-wing weekly Polityka published the entire list of 90 signatories as did the daily Gazeta Wyborcza. In Poland, this letter was modestly promoted April 19 under the title “Open Letter of Concerned Catholics”, but also was passed off as a letter by theologians. It did not receive much attention.

This Polish title seems more fitting than National Catholic Reporter’s “Prominent theologians.” Indeed, the number of people who could be considered theologians signing the letter is insignificant. There are only about twenty people who are somehow related to theology. The overwhelming majority of them are not. Among the signatories, who come from all over the world, there is Tomasz Kamil Gbur, who identified himself as a technical consultant in the field of quality control, from Berlin, Germany. The letter was also signed by Katarzyna Martynuska, an icon painter and musician from Warsaw, Poland. Signatories include an administrative employee, an economist, a student, a librarian, an art historian, a conductor, a business instructor, teachers, translators, and two self-identified retirees from Great Britain. One person’s only credentials were that she has “Polish parents.”

Six Polish journalists signed the letter, a stark contrast to the 108 Polish journalists who recently signed an open letter in support of the abortion ban. One of the pro-abortion signatories represents Magazyn Świąteczny, a magazine of Gazeta Wyborcza, which is responsible for orchestrating the attacks against the proposed abortion ban. Another is from the monthly Znak that is known in Poland for publishing very controversial articles on homosexuality, or so-called queer theology. The list of people with no mentioned credentials at all is very long. They live in the United Kingdom, Argentina, the United States, Germany, Chile, Peru, Bolivia, Australia, Columbia, and Holland. It is a letter signed by 90 people from all over the world, among 1.2 billion Catholics worldwide.

Notably, among the signatories there are some controversial figures. For instance, Lesley-Anne Knight was once head of Caritas Internationalis, the Vatican’s charitable arm, but lost her job under Pope Benedict over concerns about the organization’s Catholic identity under her leadership. Knight now leads the pro-abortion organization “The Elders,” which advocates population control. And she does not appear to be a theologian.

Among “noted global theologians,” the National Catholic Reporter mentions feminist Tina Beattie, from Britain’s University of Roehampton. The newspaper admiringly describes Beattie as “no stranger to wrangles with local bishops and the Vatican’s doctrinal watchdog.” In 2014, she was uninvited from a lecture in Scotland by Archbishop Leo Cushley of St. Andrews and Edinburgh, who acted on instructions from the Vatican's Congregation for the Doctrine of the Faith.

And there are also some feminists from American universities: Jean Porter, from the University of Notre Dame, and Susan Ross, from Loyola University Chicago, and Barbara Hilkert Andolsen, from Fordham University.

It seems like these English-speaking signatories misunderstood the new proposed law in Poland. The bill specifically states that the doctor who causes an unborn child’s death trying to save women’s life will not be punished. The focus of the proposed law is not punishing women who do have abortions; in fact, it leaves that to the discretion of judges. Instead, it increases punishment for abortionists and people who harm pregnant women and force them to abort by ruse or threat.

It also seems like the signatories misunderstood the current abortion law in Poland. According to Polish law there are no legal limits as to the time when abortion can be performed when the woman's life or health is endangered. Abortion is also legal when a doctor believes the baby has a severe and irreversible handicap or an incurable and life- threatening disease. Most legal abortions in Poland are performed because of this. In such situations the procedure is legal until the baby is viable, so until more or less the sixth month of gestation. When the pregnancy is a result of a criminal act, abortion is permitted until the 12th week.

The truth thus contradicts the National Catholic Reporter quote that Poland permits abortion “only in the first twelve weeks of pregnancy,” perhaps repeated after the Washington Post made the same error earlier in the week.

What both publications call “one of the most restrictive abortion laws in Europe” allows for killing of unborn babies with Down syndrome who survive the abortion procedure. Two months ago one such baby was left to die after a botched abortion and screamed for an hour before dying.

Another child two years ago received some help after a botched abortion, but died later. This time no feminist theologians from foreign countries wrote a letter discussing “profound moral dilemmas” concerning abortion.

The signatories directly advocate for abortion and birth control, statements against the teachings of the Church, and promote the discredited belief that birth control lowers abortion rates. Their letter states, “In situations where abortion is deemed necessary — such as those currently permitted under Polish law — we believe that access to early, safe and legal abortion is essential.”