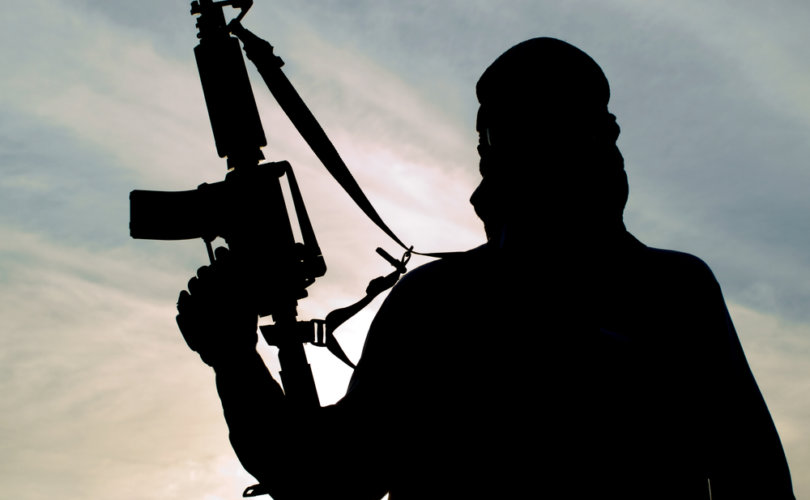 May 29, 2018 (Turning Point Project) – I dare say that most people who have read history would like to think that if they had been present at some pivotal point in history, they would have chosen the right side – with the Allies and against the Axis, with Wilberforce and against the slave traders, with the Romans and against the child-sacrificing Carthaginians.

If I had lived back then, we tell ourselves, I would have fought with the right side, no matter the odds.

Well, now's your chance. Because it looks very much as though we are at one of those pivotal moments – possibly at one of the major turning points in history, and probably one of the most dangerous. We tend to think that historical turning points generally involve a breakthrough to a higher plane – a turn for the better rather than a turn for the worse. But that's not always the case. Sometimes, the pendulum of history swings backward and slices off centuries of progress. The turning point at which we now stand threatens to cast us back more than a thousand years to some of history's darkest days. We may soon be fighting for things we thought had been secured for all time – basics such as freedom of religion, freedom of speech, and even freedom from enslavement.

The turning point I refer to is the civilizational struggle between Islam and the West (acknowledging, of course, that much of the Western tradition has been adopted by people who live outside the traditional geographic boundaries of the West). On a larger view, the struggle can more accurately be described as a conflict between Christianity and Islam, because if the West loses its Christian soul, it will also lose the ability and the will to defend its freedoms.

Of course, some people deny that there is any “clash of civilizations.” All religions and all cultures want the same thing, they say, and they assure us that the tiny handful of trouble-makers in the Muslim world do not represent the vast majority.

But time and again, polls have shown that at least a majority of Muslims want to be ruled by sharia law – a throwback to the harsh legal system that developed in seventh-century Arabia. Contrary to “enlightened” expectations, it turns out that a great many Muslims in a great many places favor cruel and unusual punishments for theft, adultery, blasphemy, and apostasy.

That's what they want for fellow Muslims who go astray. But if you're a non-Muslim you don't have to go astray in order to be punished. The mere existence of Jews, Christians, and other minorities is considered an affront by many Muslims. As a result, discrimination against non-Muslims is endemic in the Muslim world. It can't be blamed on a tiny minority of bigots, because just about everyone – including police, government officials, employers, and next-door neighbors – expects unbelievers to know their place.

Jews and Christians got the message a long time ago. That's why there are so few of them left in places that used to be their homelands – in the Middle East, North Africa, and Turkey. For those who don't leave voluntarily, the daily low-level persecution sometimes breaks out into organized violence. That was the case in the 1914-1923 genocide against Armenian, Assyrian, and Greek Christians living in the Ottoman Empire, in the 1933 massacre of Assyrian Christians in Simele, Iraq, and in the 1941 Farhud (pogrom) against the Jewish population of Baghdad. In more recent years we've witnessed the slaughter of Christians and Yazidis by ISIS in Syria and Northern Iraq, the numerous massacres of Christians carried out by Boko Haran in Northern Nigeria and by al-Shabaab in Somalia and Kenya, and the frequent attacks on Coptic Christian churches in Egypt.

“Witnessed” may be too strong a word. Many in the West simply noted these atrocities, and then continued to go about their business as though nothing had happened. But, to paraphrase Trotsky, “You may not be interested in the clash of civilizations, but the clash of civilizations is interested in you.” For a long time, people in the U.S. and Europe were able to ignore the barbarities in Africa, Iraq, and elsewhere. But then the clash of civilization moved north and into Europe. When the “clash” made its appearance in the streets of Paris, in Christmas markets in Germany, and in a concert hall in Manchester, only the willfully blind could fail to notice.

But, apparently, there are a lot of those. In Europe, America, and Canada, the elites in government, media, academia, and even the Church continue to insist that there is no clash. That's true in a sense. You can't have a clash if only one side is fighting. And thus far the pushback against jihad – both of the armed variety and the stealth variety – has been feeble. The elites won't even contemplate the obvious first step – tight restrictions on Muslim immigration.

Moreover, they do everything they can to cover up the clash. Police aren't allowed to report on the extent of immigrant crime, news media won't carry stories about the crimes unless they are exceptionally violent, outspoken critics of Islam or immigration are brought before magistrates, and ordinary citizens who post “Islamophobic” remarks on Facebook are visited by police.

The West's self-imposed blindness to what is happening forces us to another observation about the historical turning point that is now developing. The battle is not simply a civilizational struggle between Islam and the West; it also involves a war within Western civilization itself. Many of our Western institutions now reject the Western heritage, and many of them have effectively taken the side of Islam.

On almost any issue involving a conflict between Islam and traditional Western values, the schools, the media, the courts, and many of the churches stand with Islam. They may not look at it that way. They may rationalize their actions as nothing more than a defense of the civil rights of Muslims. Many of them are likely unfamiliar with the concept of stealth jihad. But they are facilitating it just the same. The main form this facilitation takes is the suppression of any bad news about Islam. Thus, in 2012, Congress refused to investigate Muslim Brotherhood penetration of government agencies, and in the same year the FBI, the Pentagon, and other security agencies bowed to Muslim pressure and purged their training materials of any suggestion that Islamic terrorists were motivated by Islamic ideology. More recently, media giants such as Google, Facebook, and Twitter have taken to stifling the voices of those who speak out against Islamic oppression.

One could cite numerous other instances of this near-suicidal impulse to side with our ideological enemies: the judges who block restrictions on Muslim immigration, the bishops who sign up with the deceptive anti-“Islamophobia” campaign, and the Obama administration's gift of billions of dollars to Iran.

With a few exception, such as the bishops, these enablers of cultural jihad are secular progressives. Despite their moniker, however, progressives can be decidedly regressive. They champion abortion at every stage of pregnancy – a practice which suggests that the distance between us and the child-sacrificing Carthaginians is not as great as we may think. Progressives promise to pull us into the future, yet they often act to drag us into the past. Several progressive voices now want severe restrictions on freedom of speech. This has already happened on college campuses where hate speech codes effectively stifle free expression. The average college student today has no more freedom of speech than a serving woman in the court of Cleopatra. The “enlightened” progressives who run Google, YouTube, and Facebook don't have much use for freedom of expression either. Critics of Islam are particularly liable to be restricted, suspended or banned by these Internet monopolies.

Here is the situation in brief. We stand at one of the major turning points of history. Two powerful forces for regression threaten to drag us into a dark past. On the one hand, Islamists want to bring back the subjugation of women, female genital mutilation, sex slavery, beheadings, and dhimmitude for non-believers. On the other hand, their hi-tech progressive enablers are decimating non-Muslim populations by promoting contraception and abortion, while simultaneously controlling the flow of information about Islam using speech-suppressing strategies that no absolute monarch could ever have imagined.

Now is a time for choosing. I won't say the choice is clear. Much has been done to muddy the waters – to make sure that we remain confused and complacent. Moreover, few things are ever completely clear when you're caught in the middle of events. For many Jews in the early 1940s, their situation only became completely clear when they were hauled off to concentration camps. For many Americans in 1941, the world situation only became clear with the attack on Pearl Harbor. Those who wait for absolute clarity often find that they have waited for too long.

Although the means of obfuscating the truth are far more sophisticated now than they were in the 1940s, we still have a marked advantage over our counterparts in that era. We have far more historical perspective than was available to them. For example, when the Nazis were building up their military machine in the 1930s, there was no thousand-year history of Nazi aggression to serve as a warning. The Nazi party was little more than a decade old, and Hitler had not come to power until 1933. There was some excuse for those who naively gave the Nazis the benefit of the doubt.

We, on the other hand, have very little excuse for ignoring the signs of the time. For those who study history, they are very familiar signs. That's because Islam has a 1,400-year history of aggression. And the battle plan has been remarkably consistent over time – even including migration as a means of invasion. The latest installment of that 1,400-year-old plan for world conquest in the name of Allah has already begun. We are witnessing a remarkable expansion of Islam into every corner of the world – Africa, Australia, the Philippines, China, Russia, Europe, and North and South America.

Only this time the forces of Islam are being aided and abetted by the very powerful forces of leftist progressivism. Earlier, I mentioned some of the ways leftists defend Islam. Here's another. One year ago, after delivering a lecture in Iceland on the jihad threat, author Robert Spencer was poisoned by a leftist, then denied proper testing and treatment by an emergency room doctor (also a leftist ideologue). Although more than a year has passed, police have taken no action against the suspected poisoner, and the Icelandic Medical Ethics Committee has taken no action against the derelict doctor.

Committed leftists and committed Islamists: it's a hard combination to beat. Both believe very firmly in what they believe. Unless Christians believe very firmly that they must be stopped, both will continue to expand. We stand at a decisive point in history. Choosing to stay on the sidelines only serves to increase the odds that these regressive forces will triumph.