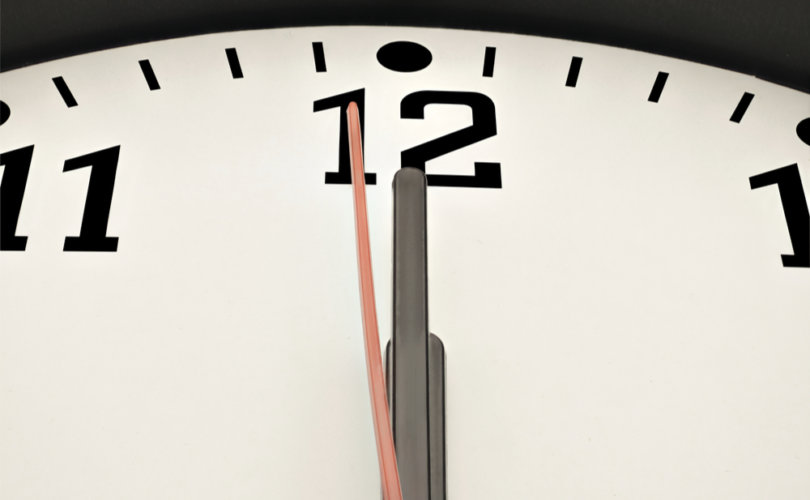 (American Thinker) — The clock shows one minute before midnight. This is it. No exaggeration. But that clock isn’t illustrating the time Earth has left until it is consumed by man-caused climate change. Instead, it is telling us how little time remains before the United States, erstwhile land of the free and home of the brave, becomes just another sterile authoritarian state. Before it is too late to reign in a tyrannical government that has made a mockery of the Founders’ vision of limited government of, by, and for the people. A government that is now openly of, by, and for itself. A government that is rapidly becoming as opaque, dishonest, and abusive as those it used to challenge and even fight.

No one likes a pessimist, but the only chance we have to preserve “the last best hope” is to be totally, brutally honest with ourselves. Now. Right this moment. Lest we one day soon be relegated, as Ronald Reagan warned, to “telling our children and our children’s children what it was once like in the United States where men were free.”

Radical progressives and Democrats, but I repeat myself, have carefully crafted a society in which they hold all the power, pull all the levers, and call all the shots. They also dictate the parameters of every argument, even if that “argument” always—and only—consists of shouting “racism” and “intolerance” at anyone with whom they disagree. Talk about projection. Being honest means also acknowledging that Republicans, particularly of the RINO variety, have allowed this to happen. This should be intolerable. Period. No matter what.

No one gets to tell you what your job is worth. No one gets to tell you what you must allow into your body. No one gets to tell you that you have no right to interfere with what they wish to “teach” your kids. Period. The Founders would alternately laugh and cry at this madness. No one should be allowed to abridge your right to free speech, to defend yourself, or to believe and worship as you wish—and your conscience dictates. No faceless, unelected bureaucrat should be allowed to essentially make laws that seriously impact your life. And no one in power should be able to ignore, overturn, or otherwise negate your vote. (Those who preposterously pretend that there was absolutely no malfeasance in the 2020 presidential election are either complicit, ignorant, hiding behind a wall of deception, or insane.)

Democrats know that time favors them and their unending quest for more power and control. Demographic change, brought on in large part by their open borders policy, is perhaps their biggest trump (and anti-Trump) card. In addition, their control of academia, the mainstream media, social media, entertainment, professional sports leagues, Big Tech, and Big Business boardrooms grants them a stranglehold on the flow of information with which most people will come in contact. Leftists have successfully completed their “long march through the institutions” on which they embarked in the late 1960s.

Moreover, Democrats, in control of all branches of the federal government, have enacted new laws with the sole intention of enhancing their power. Gerrymandering, election rigging, court-packing, ending the filibuster, whatever it takes to retain and grow their power, they will do it. Period. Screw you.

Tragically, COVID-19 was the greatest gift would-be tyrants have ever received, even as it likely heralds the end of the Republic—and allows for “The Great Reset” to come to fruition. Without the coronavirus, the staggering increase in mail-in voting would never have occurred and Biden could never have “won” the election. Nor would mask mandates, lockdowns, the mass closing of small businesses, and assorted other assaults on personal liberty have been tolerated.

So how do we reclaim our Republic, one which we were bequeathed through so much historical knowledge, toil, sacrifice, and bloodshed? Especially as every time a conservative so much as speaks up, “progressives” and their sycophants in the media scream in unison, “See the radical, far-right, white supremacists’ tendency towards violence?!” If a parent dares—dares!—to speak up to members of a self-benighted school board (whose salaries they pay) and tell them they don’t want their young son or daughter to 1) be taught that America is and always was evil, 2) be instructed in the ways of anal sex or 3) be indoctrinated into believing Communism is superior to Capitalism, they are promptly branded as “domestic terrorists,” though they did so unarmed and without physical threat. Leftists project. It’s what they do. And it is sickeningly effective. And evil. They incessantly insist that Republicans are racist, conservatives are heartless, and that “the patriarchy” rules America, knowing full well none of this is true.

Therefore, the only way to stave off the demise of our republic is for conservatives/patriots/sane people to utterly disregard what Leftists/America haters/illogical people think, be willing to sacrifice like our Founders, and not reflexively shy from confrontation.

We don’t need to shed our past or the ties that once bound us. Quite the opposite. We need to declare our independence anew and rededicate ourselves to our Constitution, the most efficacious document in human history. We need a new commitment to the ideas and ideals that led to the birth of the richest, freest, and most generous nation in human history. (One which dramatically improved the lives of everyone on the planet by, among other things, inventing the assembly line, radio, telephone, light bulb, television, Polio vaccine, airplane, internet, etc., etc. This was not a coincidence.)

We conservatives, each of us, need to stand strong in the face (often literally) of demented personal attacks from progressives labeling us “racists,” “bigots,” and “white supremacists.” (Especially if you happen to be Black.) We need to examine our children’s curriculum, attend our school board meetings, go to our caucuses, never fail to vote, contact our congressmen, etc. Recent events have shown that if we shine the light, the cockroaches may run.

I don’t wish to engage in hyperbole, but we have truly arrived at a historical tipping point. This is a moment that requires the equivalent of a Gettysburg Address. But sadly it does not appear that we have anyone capable of composing or delivering a message such as that.

Therefore, in closing, I will quote the actual, original one, spoken by Abraham Lincoln seven score and eighteen years ago: “It is rather for us to be here dedicated to the great task remaining before us—that from these honored dead we take increased devotion to that cause for which they gave the last full measure of devotion that we here highly resolve that these dead shall not have died in vain—that this nation, under God, shall have a new birth of freedom and that government of the people, by the people, for the people, shall not perish from the earth.” Hear, hear.