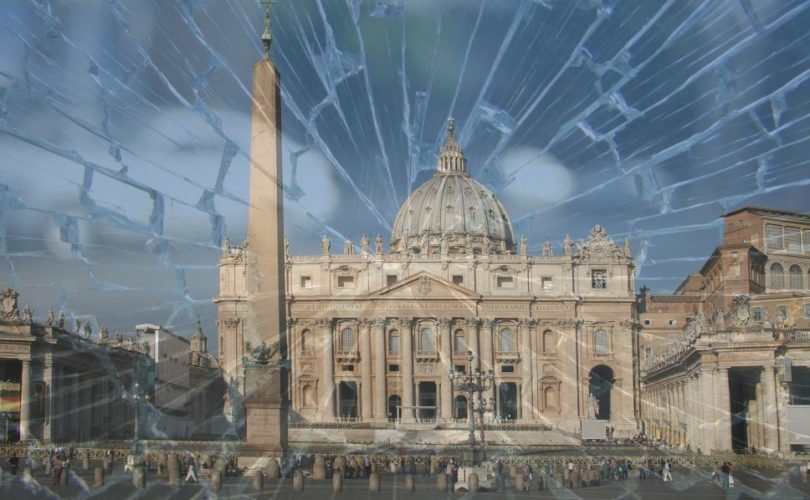 Editor’s note: The following article comes from an anonymous priest.

June 30, 2020 (LifeSiteNews) — In several recent statements, culminating in an interview with Philip Lawler, Archbishop Carlo Maria Viganò has traced the evils that afflict the Church today back to their root within the Second Vatican Council (1962–65) and the New Order of the Mass (1969). In this he has rendered a service to all Catholics, for while no problem can be solved until people will admit its existence, hardly anyone in authority in the Church has been willing publicly to admit that some evil spirit entered the Church by means of this council and the subsequent liturgical revolution.

Not being an exorcist, I do not know the proper name of this spirit, unless perhaps it is Apollyon (Apoc. 9:11). Developing a suggestion of Archbishop Viganò, we might however call it “the spirit of rupture.” It established itself in the Church in two main ways: first by persuading a great ecumenical council to promulgate documents that would favor heresy, at least by silence, ambiguity, or style; secondly, by persuading a pope to break with all preceding tradition and promulgate a new Mass, and new rites for all the sacraments, which would be more acceptable to Protestants and to others who do not hold the Catholic faith.

Either of these events would have been gravely harmful to the Church. Together, they have caused what Bishop Bernard Fellay of the Society of St Pius X has called “a disaster without a name.”

Many good authors have told the tragic story well. Romano Amerio’s Iota Unum is an almost miraculously objective survey of the changes in the Church caused by the council fathers and their heirs. Michael Davies’s works, especially Pope John’s Council and Pope Paul’s New Mass, offer a clear and even entertaining, as well as scrupulously accurate, account of how the thing was done. Dietrich von Hildebrand, in The Devastated Vineyard, shows us the supernatural spirit in which Catholics should respond. Marcel Lefebvre’s Open Letter to Confused Catholics and Bishop Bernard Tissier de Mallerais’s biography of its author reveal indirectly the malice of the spirit of rupture by showing what happened to a Catholic bishop who resisted.  Roberto de Mattei’s Vatican II: An untold story and Paolo Pasqualucci’s The Parallel Council are scholarly accounts of the maneuvers by which those who are euphemistically called the innovators took the upper hand. Nor is this list complete.

It is perhaps impossible, also, to give a complete list of all the dogmas that have been undermined in the minds of clergy and laity by the prudential judgments that underlie the documents of the Second Vatican Council and the act of replacing the Catholic liturgy with a new liturgy. One could  mention these: the absence of salvation outside the Church; the evil of heresy; the retributive justice of God and our need to expiate our sins; the existence of an eternal Hell; the substantial and abiding presence of Christ in the Blessed Sacrament; the propitiatory sacrifice of the Mass; the inerrancy of the entirety of Scripture; the desirability of Christendom; and the need to evangelize Jews and pagans for their salvation.

More fundamentally, though, it is the very idea of revealed truth and unchanging dogmas that has been shaken. That is why we speak of the invasion of the Church by “neo-modernism.” Modernism is the heresy that denies the existence of unchanging truths, once revealed by God to the prophets and the apostles, and to be handed on with the same meaning by the successors of the apostles until Christ returns.

What is the way forward? I do not think it is to write scholarly commentaries showing how all the documents promulgated by the Second Vatican Council, and everything in the new liturgy promulgated afterward, can be read in an orthodox fashion. That has been done, and it has not succeeded in exorcising the evil. Something else must be tried.

The way up and the way down are one and the same, said an ancient sage. It does not seem likely that the evil spirit will be expunged until the bishops shall have assembled again in council and anathematized by name each of the errors circulating in the Church, and until the successor of St Peter shall have declared the ancient rites of Mass and sacrament to be now and forever the proper liturgy of the Roman Church.  It would seem also wise to join to these definitions a further anathema against those who would use any of the documents of the last council to support the errors that this new one would condemn. After the poison had thus been drawn, theologians could consider at their leisure whether there were statements within those earlier documents that could not in any way be reconciled with orthodoxy. On this point, I believe I am more sanguine than Archbishop Vigano and Bishop Schneider.

That great day is still in the future, and divine providence alone knows when it will come. In the meantime, there is no divine or human law that forbids individual bishops from working for it, by two actions. First, any diocesan bishop of the Latin church may begin to say the ancient Latin Mass exclusively, in his cathedral and in the parishes he inspects. Secondly, he may draw up a list of the errors that have already been condemned by the Church, taken for example from the Syllabus of Errors, from the anti-modernist oath and Lamentabili of Pope St. Pius X, and from various 20th-century encyclicals, and require clergy and catechists to swear that they disavow them. If several diocesan bishops took those actions, it could unstop a flow of grace too strong to be resisted.

Five bishops, including Cardinal Raymond Burke and Cardinal Janis Pujats, have already done something that foreshadows the second of these two actions, by publishing last year a Declaration of Truths against the principal errors of our time. Unfortunately, of these five bishops, only one, Archbishop Tomasz Peta, governs a diocese. What is needed is for a similar group of diocesan bishops, on their own initiative, to unite their presbyterates to them in the great work of restoring orthodoxy. The frequent recitation, at least in private, by bishops and priests of the Leonine Prayer of Exorcism against Satan and the apostate angels would be helpful here.

What of the laity? They can assist the Church greatly by pursuing holiness according to the duties of their state in life. But in past years, it sometimes happened that laymen took the initiative in resisting some heresy. In the 5th century, when the patriarch of Constantinople preached against calling Mary the mother of God, a layman called Eusebius interrupted him and protested, and thus began the movement that led to the great Council of Ephesus. Of course, one has to be sure of one’s ground, but the grace of confirmation gives everyone the right and duty to witness to the Faith whenever silence would mean consent to error. If a bishop, even a bishop in some great patriarchal see, has taught heresy, the faithful need not take it lying down.