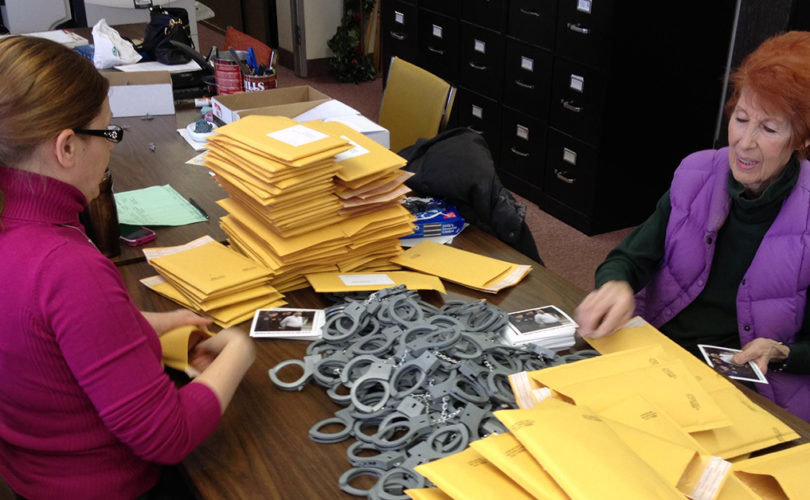 Inside: a picture of Naresh Patel, the Oklahoma abortionist arrested last month, along with a pair of plastic handcuffs and a signed note from me reading, “Could you be next? If you want to get out of the abortion business, give me a call.” I also included my cell phone number.

This project was inspired by the arrest of abortionist Naresh Patel last month at his abortion clinic for telling women that they were pregnant when whey weren’t so he could sell them abortion drugs. Patel has been charged with fraud and racketeering, and his Oklahoma clinic remains closed.

Patel first came to public notice in 1992 when he was investigated for burning the bodies of 55 aborted babies in a field east of Shawnee. Despite public outrage, Patel was not charged with a crime because he hadn’t violated any laws. He has also been accused by several women of sexually assaulting them during abortion procedures.

It’s no surprise that someone willing to kill unborn babies for a living would turn to crime, and Patel is not alone. Abortionists have been charged with crimes ranging from tax fraud and dealing drugs to rape and even murder. Some of the most notorious offenders include:

See here for a more extensive list of abortionists’ misdeeds.

Three Goals for the “Handcuffs Project”

The League’s “Handcuffs Project” is intended to serve three purposes:

1. To call the authorities to task for dragging their feet on bringing abortionists to justice. Too often, state and local authorities refuse to take action when abortionists are accused of wrongdoing. They should be the ones bringing handcuffs out to the abortion clinics!

2. To call on abortionists to think hard about the path they’ve chosen and how it has corrupted them. It’s got to be unsettling for any abortionist when a crook like Patel is arrested. Adding a pair of plastic handcuffs pushes the issue, and may lead to a change of heart.

3. To educate the public about the dark side of the abortion industry. The abortion industry has done a great job—and in the case of Planned Parenthood, spent astonishing amounts of money—to project a positive public image. But the truth is that the practice of abortion is extremely morally corrupting, and the public needs to know.

How Will Abortionists React? Stay Tuned!

What kind response can we expect from the abortionists we’ve sent our handcuffs care packages to? The packages should begin to arrive at abortion clinics across the country within the next couple of days. Stay tuned for updates on how they respond.

Special thanks to our friends at Operation Rescue, who helped this project by connecting us with the abortion clinics across the country, upon which they keep a close eye. To learn more about how you can bring abortionists’ crimes and other misdeeds to light, check out Abortion Free by Operation Rescue’s Troy Newman and Cheryl Sullenger.