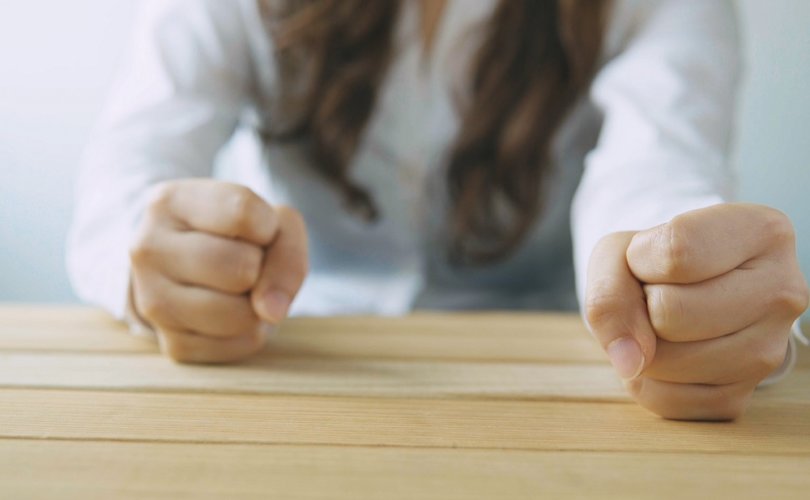 May 15, 2019 (LifeSiteNews) — Democratic Pennsylvania state representative Brian Sims is facing a media maelstrom for verbal attacks on peaceful pro-life women. He is no outlier. Attacks faced by Created Equal, the pro-life organization of which I am vice president, signal that Sims may be a harbinger if violent politically liberal students follow his path to power.

Just weeks before Sims broadcast himself berating a pro-life woman, Jillian Ward, a pro-abortion student at University of North Carolina, was arrested for assaulting a member of our team using dialogue and pictures of aborted fetuses to change opinion on campus.

Like Sims, Ward is committed to political liberalism. But unlike Sims, she is not in power — yet.

Watching footage of the incident, the irony is evident as Ward shouts, “You’re a terrible person!” — to someone she has just assaulted. However, it is easier to miss that she is a social justice warrior whose articles call the liberal-minded to action. “You are in a position of power; use your powers for good,” she writes.

Whether Ward considers assaulting someone with a view different from her own using her powers for good is unclear. What is evident is that this liberal thinker recently set down her pen to make a fist.

And she is not alone. Just months prior, Thomas Metcalf, student at Indiana University, was arrested for stealing and vandalizing Created Equal’s signs. With black spray paint, he blackened the eyes of fetuses already dismembered.

Metcalf, like Ward, is rising within the ranks of the political Left. Before condemning the position of Created Equal team members — demonstrating that his violence was an effort to silence political opponents — this member of the Young Democratic Socialists of America roused a liberal rally, shouting, “Donald Trump is not the one in power! We are the one in power!”

And, in a truth-is-stranger-than-fiction incident, the year before Metcalf met our team, Ian Ramos of Texas State University pummeled Created Equal signs with his fists and feet. It was later discovered he was studying “nonviolent social resistance.” The irony is underscored with the blood of preborn babies falling victim to his ideology.

On Twitter, Ramos explained, “I engaged my rage” and called on others to do similarly:

[Pro-life activists] try and provoke us emotionally and what do they expect? … So yeah, I hope I was able to inspire a few of you all out there. … Engage the opposition.

The thread connecting Ward, Metcalf, Ramos, and others responsible for increasing attacks on pro-lifers trails back to their political leaders. Last fall, Hillary Clinton declared, “[Y]ou cannot be civil with a political party that wants to destroy what you stand for[.]”

Attacks on pro-life groups are the fruit of liberal students following directives from above. The critical question for democracy is, what will happen if these students are given mantles of power in the wider culture?

We saw the result recently live on Twitter with Brian Sims. If his actions are tolerated, more will follow.

And yet there may be a glimmer of hope — if we can take UNC student Jillian Ward at her word. In “Why Social Justice Advocates Should Own Up to Their Mistakes,” she writes:

It’s unrealistic to assume you will never make an error in your social justice work, so the best thing you can do is own up to your mistakes when they arise and strive to do better.

If Ward means what she writes, she will admit it was wrong to assault Created Equal.

If she were to do that, to unclench her fist and pick her pen back up not only to apologize, but also to call on other social justice warriors to return to civility, perhaps there would be reason to hope for a renaissance of respect in political dialogue.

Seth Drayer is the Vice President of Created Equal, a pro-life organization leading youth to engage the culture on behalf of preborn humans.