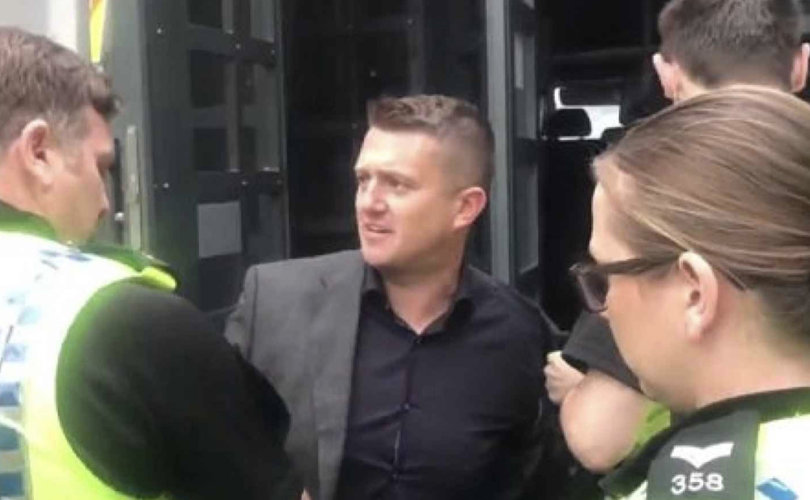 That's the headline on an NBC story about the Egyptian sports star who plays for the Liverpool soccer club. Salah prays before each game and prostrates himself in prayer after every goal he scores. He is also popular with fans, contributes to charities and is featured in an anti-drug campaign video.

According to the story, Salah's unapologetic expression of his faith on the soccer field “sends a remarkable message.” What is the remarkable message? Answer: “Salah is living, breathing proof of the multilayered identity possessed by so many Muslims in Britain.” Moreover, he is a “human rebuttal” to “Islamophobes” and “far-right populists” who fear that Muslims pose an “existential threat.” “He is someone who embodies Islam's values and wears his faith on his sleeve,” observes Miqdaad Versi, the assistant secretary general of the Muslim Council of Britain, “He is not the solution to Islamophobia, but he can play a major role.”

By coincidence, on the day before the article appeared, a judge in Leeds sent another sort of message. On that day one of England's chief “Islamophobes” was arrested, brought before the judge, summarily tried, sentenced to 13 months, and transported to Hull Prison – all within a period of about three hours. Tommy Robinson, a long-time activist against police inaction in the matter of Muslim rape gangs was arrested when live streaming a Facebook video while outside a courthouse where several men were on trial for their participation in one of those gangs. Robinson was charged with “breaching the peace.”

Robinson will be lucky if he manages to survive his 13 month sentence. That's because British prisons contain a high percentage of Muslim inmates – many of whom would love to kill Tommy Robinson. According to several commentators, that's the general idea. They suggest that the British authorities would be happy to have Robinson out of the way without having to do it themselves. It's the latest iteration on “Will no one rid me of this troublesome priest?” Indeed, four years ago, Robinson was arrested for the minor crime of exaggerating his income on a mortgage application, sentenced to 18 months, and thrown into a prison cell with Muslim inmates who proceeded to beat him savagely.

The author of the puff piece on soccer star Mohamed Salah dismisses “far-right populists” who fear that Muslims pose an “existential threat.” Apparently, he thinks that there is no threat. But Tommy Robinson's life is very much in danger for his “far-right” defense of defenseless girls. Isn't that an existential threat? How about the tens of thousands (by one estimate, a million) of teen-aged rape victims throughout England? Doesn't that qualify as an existential threat?

As Robinson's case illustrates, the threat to Britons who speak out about Islamization comes not just from Muslims, but also from the authorities who have, in effect, bowed to Islam. The police haven't been enthusiastic about bringing Muslim rape gangs to justice, but when someone like Robinson calls attention to the evil deeds, they suddenly feel the call of duty – not to go after the rapists, but to go after Robinson. It's the same with the judges – not only in England, but all over Europe. They're in the habit of administering feather-light sentences for unspeakable crimes by Muslims, but they throw the book at “Islamophobes” who call attention to the unspeakable crimes.

The arrest and kangaroo court trial of Robinson seems to have been planned well in advance. The police were ready, the judge was ready, and the van to deliver him to Hull Prison was ready. Robinson was also denied access to his lawyer, and denied bail. Meanwhile, the judge issued a gag order prohibiting British media from reporting on the case. In short, the Kafkaesque proceedings were a throwback to the kind of justice administered in the infamous Star Chamber courts.

Robinson's real crime was to draw attention not only to the rapes but also to the failure of British officialdom to do anything about them. The police were complicit in the cover-ups, so were city council members, social service organizations, “civil rights” organizations, and the media. And in one case (Telford) the cover-up of the “grooming” gangs went back almost three decades.

Paul Weston, formerly chairman of the Liberty GB party, and a human rights activist for victims of immigrant crimes, has spoken out frequently about England's totalitarian drift. He has taken to referring to Britain as a “police state” and to its leaders as the “traitor class.” He may be right. Increasingly, British authorities seem to be siding with Islamic interests against native Brits who are dismissed as “right-wing,” “nativist,” “bigoted,” and “Islamophobic.” And increasingly they are employing arbitrary tactics. Weston himself was once arrested for reading aloud in a public space a passage about Islam in Churchill's The River Wars.

There's not enough space here to go into all the reasons why England is kowtowing to Islam, but Saudi and Gulf States money probably has something to do with it. Arab enterprises are heavily invested in England, and have bought up huge chunks of prime London real estate. Qatar alone owns Harrods, the Shard (London's tallest building), Canary Wharf, Chelsea Barracks, Olympic Village, One Hyde Park (the world's most expensive apartment block), and twenty percent of the London Stock Exchange.

The financial incentive for covering up Muslim immigrant crime is not limited to England's elite leadership. The policeman, the city council member, the teacher, the social worker, and the reporter all know that one politically incorrect slip of the tongue can result in unemployment. So they hold their tongues. There are, of course, other sorts of incentives. A lot more people will be holding their tongues now that they see how easily due process can be ignored, and how suddenly one can be thrown in the midst of unfriendly Muslim gang members. The message sent by the arrest of Tommy Robinson is not a subtle one. It is a thinly disguised threat to anyone in Britain who dares to criticize Islam or the government which enables its spread.

Of course, some people don't need incentives in order to welcome the ascendancy of Islam in England. They are already true believers. They really believe that more immigration, more multiculturalism, and more diversity will lead to future harmony and happiness. Jalal Baig, the author of the puff piece on Liverpool's Muslim soccer star seems to be of this sort. He's based in Chicago, but he's doing his best to assure his readers that Islamic values are thoroughly English – and maybe a little bit better. Like the elites back in England he seems convinced that if there are any problems it's all the fault of right wing populists. It seems probable that for Mr. Baig, the arrest of Tommy Robinson is simply a case of just deserts.

Baig and others of like mind might profit from looking into another recent soccer story – this one from Iran. Last month, fans in the largest soccer stadium in Iran chanted “Reza Shah, rest in peace.” A rough decibel count would suggest that a considerable number of the crowd in the giant stadium joined in the chant which was shouted over and over. “Reza Shah” may refer to Reza Shah Pahlavi, the Shah of Iran from 1925 to 1941, or it may refer to his son, Mohammad Reza Shah Pahlavi who ruled from 1941 until Ayatollah Khomeini's Iranian Revolution forced him into exile in 1979. Both father and son strove to modernize, Westernize, and secularize Iran. The chant was a clear indication of dissatisfaction with the oppressive Islamic regime that now rules Iran.

Unlike Liverpool soccer fans, Leeds judges, and the London establishment, the Iranian fans have considerably more familiarity with what life is like in a country that's been Islamized. And to all appearances, they're not happy with it.

The leaders of Great Britain should take notice before it's too late. If they won't pay attention to Tommy Robinson, perhaps they'll pay attention to that loud and very clear message from the people of Iran about the folly of the course they are taking.

This article is published with permission from the Turning Point Project. It originally appeared in the May 30, 2018 edition of Crisis.