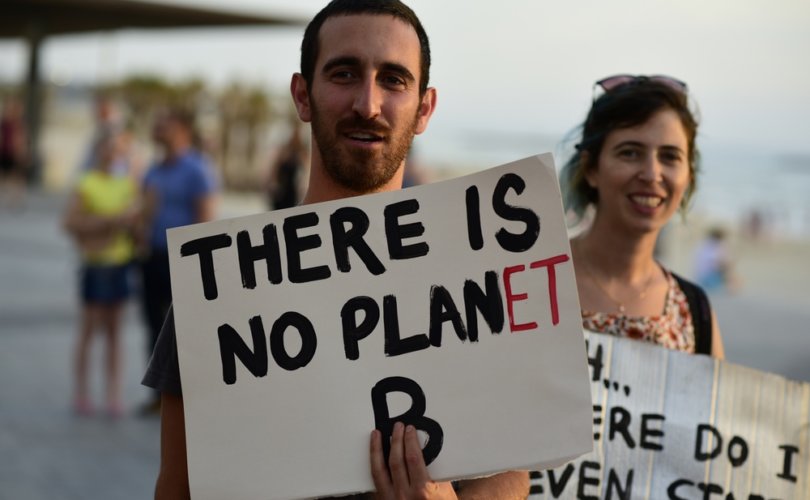 August 25, 2017 (Life Issues Institute) — Environmental activist billionaire, Tom Steyer vowed to make climate change the focus of the 2014 congressional elections, but the truth was only 3% cared about the issue. So his hired door-to-door canvassers talked about abortion and clean water.

This wasn’t a coincidence. A deliberate strategy to link abortion with environmental organizations has been implemented in some regions of the green movement.

You need to know which environmental groups also push abortion . . .

The partnership between environmentalism and pro-abortion activism didn’t happen overnight. In its Winter 2006 edition of Policy Review Guttmacher – itself a strongly pro-abortion entity – lamented the slowness in forming such an alliance, stating it was “a golden opportunity for advocates from the reproductive rights [abortion] and environmental justice communities to coalesce around common goals.”

A recent study claims a key to countering climate change is having fewer children, and it will likely fuel their enthusiasm for abortion advocacy.

Most pro-lifers are concerned about the environment and want to be good stewards of the planet. However, many might be giving to environmental organizations that also work to continue the legal killing of unborn babies in America and abroad.

Thanks to Nancy Gruber who provided crucial assistance with research on these organizations, we have a better understanding of which ones advocate for abortion. If you have documented evidence of other groups not mentioned, please forward your information to us. It should be noted that we have not solely relied upon the phrase “reproductive health” but have considered it a piece of the entire evidence. The bold emphasis is mine.

A letter dated March 22, 2017 was sent to Senate Majority Leader Mitch McConnell, Senate Minority Leader Charles Schumer, Speaker Paul Ryan, and House Minority Leader Nancy Pelosi. It included an impassioned plea to protect federal tax funding for Planned Parenthood. The letter concluded with “…we strongly urge you to oppose any efforts to repeal the Affordable Care Act and defund Planned Parenthood,” and was signed by the following environmental organizations:

The following excerpts were taken from a May 6, 2013 blog post by Rex Weyler, a director of the original Greenpeace Foundation, editor of the organization’s first newsletter and a co-founder of Greenpeace International in 1979.

“The assembly may dodge the real changes that need to occur, choosing to avoid controversial issues such as universal women’s rights, girl’s education, abortion rights…”

“The Cairo conference recognized that practices such as abortion should be treated as a public health issue to ensure safe motherhood.”

“When women exercise their right to decide whether, when and how many children to have, women, their families, and the environment they depend on for sustenance is healthier.”

The publication Healthy People, Healthy Ecosystems, A Manual on Integrating Health and Family Planning into Conservation Projects, was authored by Judy Oglethorpe, Cara Honzak and Cheryl Margoluis, and included these excerpts.

“A family planning and reproductive health component is included in almost all PHE [population-health-environment] projects implemented by conservation organizations. The rationale is that improving health without addressing family planning is likely to lead to increased population pressure on the environment.” (p. 47)

“Any family planning intervention is made significantly more effective through the addition of reproductive or maternal and child health activities.” (p. 49)

“In areas with a large number of people under age 15 (“youth bulge”), it is equally important to increase youth’s access to ASRH (adolescent sexual and reproductive health) information and services.” (p. 49)

“Reproductive health, as defined by WHO (World Health Organization 2008b), implies that people are able to have a responsible, satisfying and safe sex life and that they have the capability to reproduce and the freedom to decide if, when, and how often to do so. Implicit in this are the right of men and women to be informed of and to have access to safe, effective, affordable and acceptable methods of fertility regulation of their choice…” (p. 49)

And “developing special communications and services to meet the unique reproductive health needs of large youth populations (particularly in traditional communities where this is more challenging).” (p.50)

During a TV interview with Tucker Carlson on February 2, 2017, and reported by Robert Kraychik with the Dailywire, Michael Brune, executive director of the Sierra Club, said:

“[Abortion] helps to address the number of the people that we have on this planet. We feel that one of the ways in which we can get to a sustainable population is to empower women to make choices about their own families.”

Excerpt of an online article, Demand a Stop to Attacks on Women and Wildlife. No author was listed.

“Anti-choice Republicans are trying to repeal the Affordable Care Act and affordable access to birth control for millions of women, defund Planned Parenthood’s reproductive health services, and pass a 6-week abortion ban to effectively create a federal ban on abortion. And now that Trump is in office, the stakes are even higher.

“Not only is reproductive freedom a basic human right, it is also inextricably linked to the preservation of wildlife and wild places. A woman’s ability to access healthcare and prevent unplanned pregnancy is critical to reducing the pressure of human population on endangered species and fighting the effects of climate change.”

Online article, TACKLING THE POPULATION PROBLEM. No author was listed.

“Reproductive rights are an environmental issue. In order to make sure we leave room for wildlife, it’s critical that every pregnancy is planned and that people take the environment into consideration when planning when — or if — they want their family to grow.”

“We support unfettered access to education, reproductive healthcare and contraception for women and men… Every person should have the tools, information and ability to make the best reproductive choice for themselves, their partner and the planet.”

Online posting, ABOUT OUR POPULATION AND SUSTAINABILITY WORK. No author is listed.

“Our innovative campaigns…focus on common-sense solutions for a just and sustainable future, including the empowerment of women and girls, universal access to reproductive healthcare and education.”

Excerpt from their article, The Fight Against Urban Sprawl Goes Global, January/February 2002 issue of World Watchnewsletter

“The legal absurdity of decreasing access to safe abortion in developing countries puts the US administration in clear violation of the 1994 Cairo Program of Action which declares that people should have the ‘right to decide freely and responsibly the number and spacing of their children … and to have the information, education, and means to do so.’”

Article, Sorry, Ladies, But You Have No Choice, How extremists took over US family planning policy by Don Hinrichsen.

The author quotes Stirling Scruggs, director of the Information and External Relations Division of the United Nations Population Fund. “‘These groups are not just anti-abortion, they are anti-women, and oppose population policies and programs in general,’ says Scruggs. ‘They hate us because we have been very effective in promoting women’s rights . . .’”

During a July 5, 2013 interview for World Population Day, Robert Engelman from World Watch Institute said, “I think if you need to look to one single strategy that would have the biggest impact on population growth worldwide and indeed in the United States, you would be looking to women and their capacity to make decisions in their own lives – a critical one of which is their capacity to decide for themselves whether, when, which whom, and how often to have a child.”

The president, Tom Steyer said, “The Trump Administration has launched an attack on fundamental American rights, threatening everything from clean air to women’s reproductive rights.”

On their website is the quote, “Everyone should be able to decide if, when, and how they start or grow a family.” It serves as a link to NARAL’s website (National Abortion and Reproductive Rights Action League).

Green Investments, How Budget Cuts are Impacting Our Communities and the Environment: the Case for Reinvestment in FY17

This environmental document condemned the Trump administration’s decision to deny USAID funding to any international group that provides or promotes abortion as part of its services. The text lamented the loss of funding for contraceptive services around the world, even though the groups are fully aware that funding is available to organizations that end their involvement with abortion.

This demonstrates their belief that abortion is a necessary tool to combat population growth which they believe “in the developing world remains a contributor to deforestation, desertification, the degradation of oceans and waterways, natural resources use, and loss of biodiversity and endangered species.” (p. 46)

Sponsors of this document were the following environmental organizations:

Friends of the Missouri Breaks Monument

There is overwhelming evidence that most countries are facing a population shortage, not an overabundance of people. However, that discussion is for another day.

Increasingly, environmental groups are viewing human life as the primary enemy of a pristine worldwide environment. Help spread the news that pro-lifers may be supporting green organizations that advocate for the killing of innocent human life.

Editor’s note: This article is published by permission of the author.