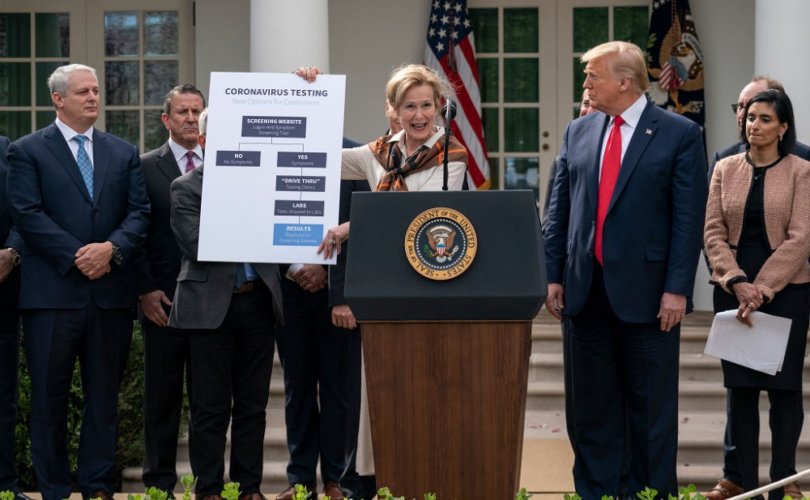 March 27, 2020 (American Thinker) — There have been a few consistent points that many of those who post at American Thinker have been making. The main point is that the media are deliberately fomenting panic. They do this partly because that's the nature of media (“if it bleeds, it leads”) and partly because most members of America's media are Trump-haters. They would willingly send America into an economic nosedive if it meant routing Trump from the White House.

Still, another thing we've been highlighting here is that media members are innumerates. They glom onto whatever large, scary, Trump-injuring numbers come their way, and then they run with those numbers.

When it comes to coronavirus, American Thinker writers have been pointing out

Each of these positions falls into the category of information that the mainstream journalists classify as false. After all, information is of no use to them if it doesn't provide drama, death, and a Democrat election victory in November 2020. However, over time, all of American Thinker's primary positions have proven to be more accurate than otherwise.

On Thursday, Dr. Deborah Birx, one of the White House coronavirus task force members, and someone who has consistently shown herself to be an excellent communicator and possessed of useful information, finally had it with the media's propensity for hysteria and fear-mongering. While discussing the revised numbers from the Imperial College London (predicting 20,000 deaths at most in England instead of 500,000), and using a soft voice and polite words, Birx scolded the media for buying into each extremist prediction or computer model:

I'm going to say something that is a little bit complicated but do it in a way we can understand it together. In the model, either you have to have a large group of people who [are] a-asymptomatic, who never presented for any test to have the kind of numbers predicted. To get to 60 million people infected, you have to have a large group of a-symptomatics. We have not seen an attack rate over 1 in 1,000. So either we are measuring the iceberg and underneath it, are a large group of people. So we are working hard to get the antibody test and figure out who these people are and do they exist. Or we have the transmission completely wrong.

So these are the things we are looking at, because the predictions of the model don't match the reality on the ground in China, South Korea or Italy. We are five times the size of Italy. If we were Italy and did all those divisions, Italy should have close to 400,000 deaths. They are not close to achieving that.

Models are models. We are — there is enough data of the real experience with the coronavirus on the ground to really make these predictions much more sound. So when people start talking about 20% of a population getting infected, it's very scary, but we don't have data that matches that based on our experience.

Having explained to the innumerates in the press that (as we've said here) the available numbers aren't coherent enough to justify hysterical reporting, Birx then gently criticized the media's fear-mongering about resources, such as hospital beds and ventilators:

And the situation about ventilators. We are reassured in meeting with our colleagues in New York that there are still I.C.U. Beds remaining and still significant — over 1,000 or 2,000 ventilators that have not been utilized.

Please for the reassurance of people around the world, to wake up this morning and look at people talking about creating DNR situations, Do Not Resuscitate situations for patients, there is no situation in the United States right now that warrants that kind of discussion. You can be thinking about it in the hospital. Certainly, hospitals talk about this on a daily basis, but to say that to the American people and make the implication that when they need a hospital bed it's not going to be there or a ventilator, it's not going to be there, we don't have evidence of that.

It's our job collectively to assure the American people, it's our job to make sure that doesn't happen. You can see the cases are concentrated in highly urban areas and there are other parts of the states that have lots of ventilators and other parts of New York state that don't have any infected. We can meet the needs by being responsive.