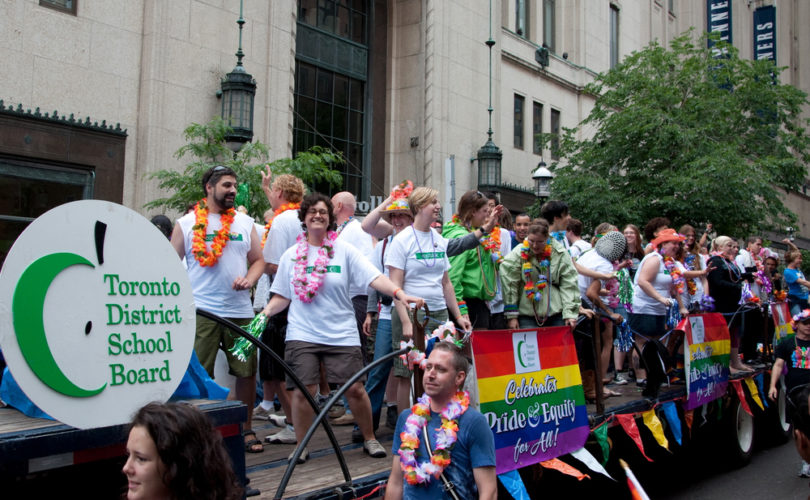 The Toronto District School Board (TDSB) is hosting three student conferences within the span of eight days for the purpose of LGBTQ activism.  The conferences, which have been organized in collaboration with Jer’s Vision, will take place on October 28, October 30, and November 5.

The first two conferences are for secondary school students, who will attend workshops relating to two-spirit and LGBTQ advocacy.  The third, which is for middle school students, will feature workshops on gay pride.  In addition, both students and teachers will be given training on advocating for all-gender washrooms.  This workshop will be given by David Stocker, a teacher who succeeded in implementing a multi-stall all-gender washroom at a middle school in Toronto last year.

Jer’s Vision plans to travel across the country organizing similar conferences over the course of the school year, before returning to Toronto in May, when 100 students will participate in a weeklong LGBTQ activism training event.

A tentative schedule for this event indicates the students will take in a drag performance; be given a presentation on implementing all-gender washrooms; attend workshops on transgender, non-binary, two-spirit, and asexual identities; and learn about “decolonizing gender.”

The weeklong training event scheduled for May 2015 is an annual one.

At the last event, which took place in early May of 2014, students were told that if they overheard things like “homosexuality is a sin” at school, then the school they attended was “unwelcoming.”

Students were also taught that one of the “ways that straight allies can fight homophobia” is by “using neutral labels like ‘partner’ instead of ‘boyfriend’ or ‘girlfriend’.”  Students also participated in a “straight privilege activity” and filled out a “heterosexual privilege” questionnaire.

Students were advised to “campaign to create a unisex bathroom at your school.”  Gender-neutral (or unisex, or all-gender) washrooms are becoming increasingly common in Toronto’s schools.  Earlier this month, one was installed at Parkdale Public School.  Unsurprisingly, all washrooms at Jer’s Vision events are open to “any person regardless of gender identity or expression.”

Given that the TDSB, which has a $3.5 billion repairs and maintenance backlog, and in which only 59 percent of grade six students meet the provincial standards for math education, is spending tax dollars to organize LGBTQ activism conferences on school days, it is clear that the school board does not have its priorities in order.

With the school trustee elections taking place on Monday along with the mayoral and council elections in Toronto, it is more important than ever to elect responsible trustees with strong values.