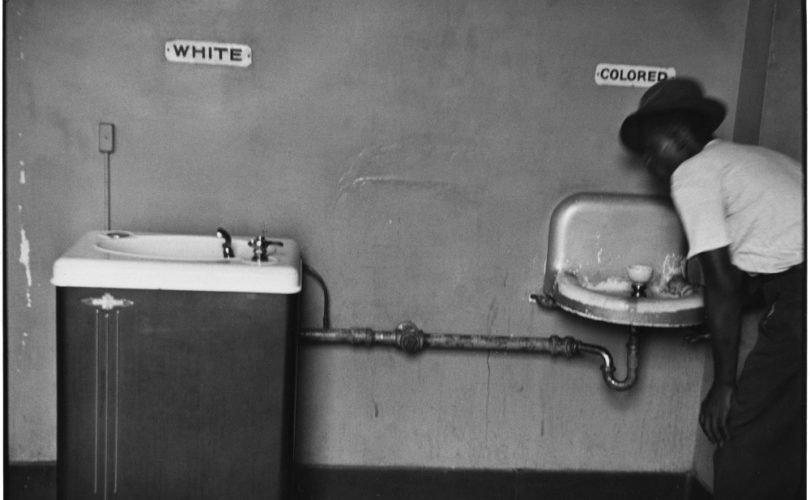 As readers of Public Discourse know, some proponents of homosexual pseudogamy now assert that argument is no longer necessary. We do not argue with segregationists, they say. We ignore them, we scorn them. They are not worth our time. They are mad or wicked. So too our courageous Ryan Anderson, who says that marriage by nature requires a man and a woman.“Shut up,” they explain.

I fear that our age is so enslaved to ideology that we can no longer notice what is obvious and natural, or think sensitively about history, or craft analogies that can stand a moment of analysis.

Slavery and Segregation: A Peculiar Institution

Consider the segregationist in Alabama, who wanted to keep one water fountain (the nice one in the middle of the hall) for whites, and another (the rusty one out back) for colored people. What can we say about that?

What the southern slaveholders themselves said about it, for one: it is a peculiar institution. It is not part of the universal human experience, this uncharitable preoccupation with race. Ancient Rome knew nothing of it. Does anyone know the color of Saint Augustine’s skin? He was born in Africa to a father with a Roman name and a mother with a Punic name. Was his blood Caucasian, Semitic, Berber, Ethiopian, or some combination thereof? No one knows, because no one thought it worth mentioning. After the first century, none of the emperors are specifically Roman, and very few are even Italian. No one cared.

The ancient Greeks, more prone to ethnic vanity, still knew nothing of racial obsession. They considered people who were not Greeks to be “barbarians,” literally those whose speech sounds like bibble-babble, but their vanity was not based upon race. They thought that people who did not live in a free, self-governing polis were to be pitied; they were missing the blessings of a vibrantly human life. Those Greeks were far more interested in the customs of Egyptians and Persians than the other way around. They were like Odysseus, passionate to learn the ways of men.

People will always find ways to distinguish themselves from their “lesser” brothers, but the bizarre racial touchiness that characterized the American South, or that hardened into the caste system in India, a mingled modus vivendi and modus odiendi, is uncommon in human affairs. It is certainly not universal.

Second: Jim Crow laws were based upon irrational “science.” A whole legal and cultural system had to support the tottering edifice of a lie. The lie was simply that the differences between Joe Louis and Max Baer were more than epidermal or physiognomic. Louis and Baer were to be considered wholly different kinds of human beings, with different kinds of lips and throat and stomach at their water fountains. That is nonsense.

Third: the separation violated the natural law. The water fountain is designed to meet the natural bodily needs of a human being. Everyone needs to drink. Thirst is far more distressing than hunger. Every traveler or stranger needs a place to sleep. Every sick person needs a bed and a doctor. The black man needs water, or food, or a bed, or medicine no more and no less than does the white man, and for the same reasons. The right to these things, without any encumbrance based upon the fantasy of race, flows from our common human nature. I was thirsty, and you gave me to drink.

Fourth: the whole purpose of maintaining separate water fountains was to maintain the racist culture. It did not touch upon the common good in any other respect. The discrimination was its own end. Now, a prudent statesman may have to discriminate according to nationality, but not for the sake of the discrimination. Let’s suppose that you shut off all immigration to the United States from Qatar. It need not be that you hate the Qatari people, or that you hate Muslims. You may be concerned that Qatar happens to be an oasis for terrorists in training. So your prohibition is aimed at a particular, specific end: preventing terrorists from entering the United States. In another decade, you might be glad to admit Qatari immigrants by the thousands. That was not the case with the southern segregationists, who wanted to extend their peculiarity forever.

Conjugal Marriage: Not Peculiar, But Universal

Now, none of these conditions characterizes our efforts to restore and protect the institution of marriage. If anything, they characterize some of our opponents in the debate. Let us see why.

First, the idea that marriage requires a man and a woman is not peculiar to us. It is universal in human culture. Its universality is based upon the obvious functions of the reproductive organs, and the obvious need to propagate the species. We may add, too, that in a multitude of manifestations, wide in variety but recognizably of the same kind, what it means to be a man and what it means to be a woman are also universal in human culture. That too is observed and accepted as natural and good, most nobly embodied in the complementarity of marriage, man and woman.

What is peculiar? The idea that there are no such things as manhood and womanhood; that the sexes are empty of significance, except in the sole case of what must then be considered a mere irrational and inexplicable desire: that this particular male must have another male, and this particular female must have another female. We can pretend that a man can possibly marry another man, because we have shut our eyes to what marriage is, and what men and women are.

That means that we have to shore up a lie. Suppose I say, “A marriage by our bodily nature requires a man and a woman. If we think about it for a moment, it also requires a vow of permanence and exclusivity, because marriage involves the time-transcending act that brings a new generation into being.” What about that is not true? When a man and a woman unite in the congress of the sexes, that is exactly what they are doing, even if they try to thwart its natural result. Nothing in human reality is comparable to that act.

So clear it is that sodomy and sexual congress are different kinds of things, biologically and ontologically, that it takes tremendous pressure to pretend otherwise. We must engage in bad science (social “research” on the children of gay parents, with self-selected participants and no check on their veracity). We must engage in linguistic subterfuge (saying that it shouldn't matter whom you “love,” finessing the meaning of “love” and diverting attention away from the issue, which is the nature of marriage and its current health). We must indoctrinate children, vilify ordinary people (“breeders”), put hesitant parents under suspicion, and concentrate the massive might of the State against normal and unremarkable cultural expression (trying to compel Irishmen in Boston to celebrate sodomy on Saint Patrick’s Day).

And what is this for? It is not for a universal need. Human beings do need friendships, but we do not register friendships with the State. Human beings do need a mother and a father; but the movement for homosexual pseudogamy, like the sexual revolution generally, cruelly denies that need. The person at the water fountain needs a drink. But no one needs sodomy, in part because no one, as an individual, needs any sexual activity at all. If you keep your clothes on, you are not going to shrivel up and die. You may want the activity. You may want it very much. But it is not a necessity. In fact, most of our noblest thinkers have cautioned against putting too much stock in the nether regions, arguing that what we really need in that regard is self-control, lest our lives become dissipated and debauched.

Of course sex is necessary, but for the human race, not the individual. And that leads me to my final point. The segregationist wanted his separate water fountain because he wanted his separate water fountain. He wanted segregation for the sake of segregation. Unless he was a deranged ideologue, he did not think any farther than that. The proponents of homosexual pseudogamy are like him not in odium but in single-minded heedlessness. They want their relationships to be recognized as marriages, and that is that. Unless they are deranged ideologues who say openly that they seek to destroy marriage, they do not think any farther.

Ryan Anderson and his comrades are analogous to the patient, thoughtful, carefully arguing, natural-law-upholding Martin Luther King, appealing from Birmingham Jail to his fellow Christian pastors, begging them to think. There are more things at stake here than your comfort.

Anthony Esolen is Professor of English at Providence College in Providence, Rhode Island, and the author of Ten Ways to Destroy the Imagination of Your Child and Ironies of Faith. He has translated Tasso’s Gerusalemme liberata and Dante’s The Divine Comedy. This article reprinted with permission from The Public Discourse.