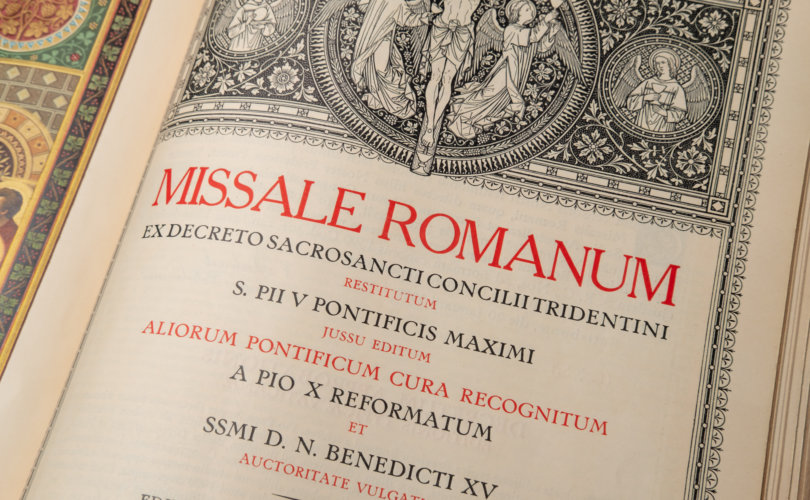 July 20, 2021 (LifeSiteNews) – Traditionis Custodes, issued by Pope Francis on the Feast of Our Lady of Carmel, is an exercise in diabolically contemptuous sarcasm. But before discussing why, let’s begin by recognizing some laudable qualities that this motu proprio possesses. Indeed, Traditionis Custodes and its accompanying letter display qualities that are as rare nowadays as they are precious: clarity and brevity.

The intention is crystal clear: Pope Francis explicitly states his aim to abolish the Mass of the Ages, before laying down a number of norms for the implementation of this clearly stated goal. To anyone who has long been spiritually nourished by the Mass of the Ages, in communion with all the saints over the centuries, this can only appear absolutely apocalyptic.

Here is how Pope Francis unambiguously states, in the letter accompanying his new motu proprio, this intention to thoroughly obliterate the Mass of the Ages: “I take the firm decision to abrogate all the norms, instructions, permissions and customs that precede the present Motu proprio, and declare that the liturgical books promulgated by the saintly Pontiffs Paul VI and John Paul II, in conformity with the decrees of Vatican Council II, constitute the unique expression of the lex orandi of the Roman Rite.” This means that the venerable Traditional Latin Mass, with more than a millennium of existence, is no longer part of the Roman Rite. With one simple stroke of the pen, it has quite simply been written out of the Roman Rite. If this is not clear enough, Pope Francis also dictates two principles that all bishops must follow: even if those who are attached to the Traditional Latin Mass are temporarily permitted to continue attending it, they “need to return in due time to the Roman Rite promulgated by Saints Paul VI and John Paul II,” and bishops must “discontinue the erection of new personal parishes.” So, there is to be, on the one hand, temporary tolerance for already existing Traditional Mass celebrations, and on the other hand, a strict interdiction to allow any new Traditional Mass parishes. This is a clear death sentence.

One immediately wonders: Is the liturgy the Pope’s personal possession that he can so blithely discard? Or is this possibly a monumental abuse of the power of the papacy? Indeed, Pope Benedict XVI wrote, when promulgating Summorum Pontificum: “What earlier generations held as sacred remains sacred and great for us too, and it cannot be all of a sudden entirely forbidden or even considered harmful.” Not so, apparently, according to Pope Francis. In fact, his new motu proprio expresses the exact opposite: “What earlier generations held as sacred must be considered by us as harmful and therefore must ultimately be forbidden.”

A model of Orwellian rhetoric

— Article continues below Petition —
SIGN: Show Pope Francis the Latin Mass will survive any suppression
Show Petition Text
36718 have signed the petition.
Let's get to 40000!
Thank you for signing this petition!
Add your signature:
Show Petition Text

Taking into account this clearly expressed aim to obliterate the Traditional Roman Rite, let’s ponder a moment over the title given to the motu proprio, which is an example of what one might call Orwellian antiphrasis. Antiphrasis is the rhetorical device that consists in sarcastically saying the opposite of what is actually meant in such a way that one’s true intention is made manifest and obvious. Pope Francis clearly announces his determined will to eliminate the Traditional Mass of the Ages, and yet the decree is sarcastically entitled: ‘Traditionis Custodes,” meaning “Guardians of Tradition.” No theological studies are required to see the obvious: this is sheer sneering sarcasm that, presupposing the best intentions on the part of the Holy Father, is a trickery of the devil, who has so cleverly managed to disorient his mind and his heart.

The discord and dissonance between this clearly stated aim and this title reminds one of the names given to the totalitarian government headquarters depicted by George Orwell in his novel 1984: the Ministry of Truth, which spreads propaganda and lies, the Ministry of Peace, which prepares for war, the Ministry of Abundance, which propagates famine, or the Ministry of Love, where innocent men are tortured. In like manner, “Guardians of Tradition” instructs the shepherds to ultimately obliterate the Traditional Roman Rite. “Betrayers of Tradition” would be a much more apt title.

Such Orwellian rhetoric could also make one think of another commonplace antiphrastic expression: “sexual and reproductive rights,” which designates in reality not the right to reproduce, to have children, but the exact contrary: the right to murder one’s own child in the womb through abortion. Likewise, these so-called “Guardians of Tradition,” rather than protecting, nurturing, and caring for it as a loving mother would do for her child, would murder it and throw its remains onto the garbage heap of history.

However, that is not all. Pope Francis continues: “I take comfort in this decision from the fact that, after the Council of Trent, St. Pius V also abrogated all the rites that could not claim a proven antiquity, establishing for the whole Latin Church a single Missale Romanum.” This claim of continuity with the sainted Pope Pius V is blatantly deceptive.

There is a superficial similitude in that both popes establish unity through a single Roman Rite, but there is an essential difference that is obfuscated: Pope St. Pius V abrogated precisely the novel rites that were less than 200 years of age, thereby upholding and guarding Tradition, whereas Pope Francis does the exact contrary: it is the novel 60-year-old novus ordo mass that is made the universal norm of the Church while the ancient, venerable rite, which alone has any claim to antiquity, is abolished. Thus, Pope Francis diametrically opposes the sainted pope’s clear intentions by abolishing the Traditional Rite his predecessor so faithfully guarded.

Moreover, Saint Pius V, in Quo Primum, in which he promulgated the Tridentine Mass, stated, “Therefore, no one whosoever is permitted to alter this notice of Our permission, statute, ordinance, command, precept, grant, indult, declaration, will, decree, and prohibition. Would anyone, however, presume to commit such an act, he should know that he will incur the wrath of Almighty God and of the Blessed Apostles Peter and Paul.” Did Pope Francis truly take this dire warning into grave consideration before issuing his motu proprio, or is he perhaps the victim of some diabolical disorientation? For, when Francis claims to be following the example of Pope St. Pius V, while in essence doing precisely the contrary, there is unquestionably some sort of diabolical deception at work.

A protest filled with filial piety

All of the above remarks, some Catholics might say, are disrespectful and demonstrate a lack of filial piety toward the Holy Father. We Catholics do have to be very careful to always venerate the See of Peter, especially when we feel the need to cry out in dismay at a diabolical deception aimed at attacking the heart of the Church: the Holy Mass of the Ages. Here is a very sincere question: By crying out against such ungodly trickery, is a faithful Catholic not, in fact, showing more reverential respect toward the Holy Father, than by remaining silent? We all desire to express filial piety toward our shepherds, and above all the supreme shepherd of the entire flock, the Vicar of Christ. This is done firstly by praying for the Church and for the Holy Father, but also by warning fellow Catholics who otherwise might fall prey to this deception. Were this deceit without grave consequences, perhaps silent prayer alone would be best, but this trickery aims very explicitly at the very gravest of consequences: the Abolition of Tradition. And so, with true filial piety, we might all cry out: Please, Holy Father, wake up! Open your eyes and see that Satan, sarcastically sneering, is making a cruel mockery of you and of your children! For the sake of the salvation of our souls and of your own, be a true Guardian, not a Betrayer, of the Sacred Tradition!