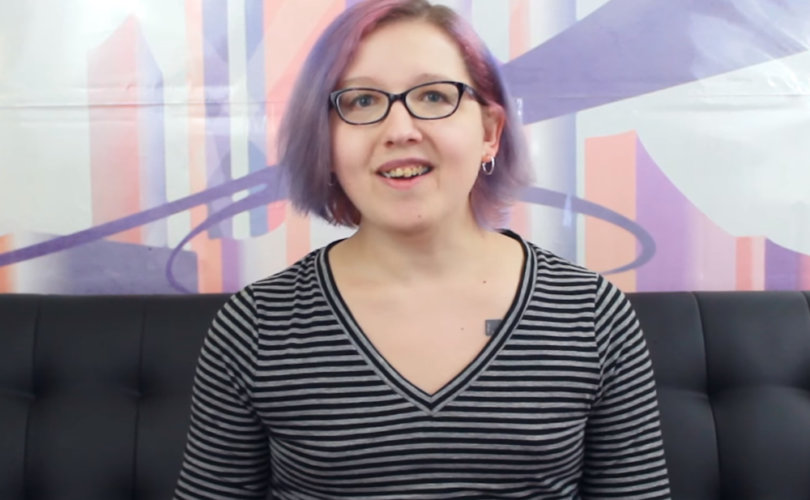 ORLANDO, Florida, July 6, 2017 (LifeSiteNews) — A popular transgender blogger issued a flurry of tweets saying “straight” men should want to have sex with men who dress as women because genitals are “only flesh.”

“Zinnia” Jones tweeted that if a normal man doesn’t desire a transgender man he is prejudice and should “work through” it.

“I don’t see a problem with telling straight guys who are exclusionary of trans women partners that they should try to work through that,” Jones tweeted.

He said men who want to be women should be treated “as the women they are,” adding that to consider transgenders sexually undesirable is “exclusionary.” Jones claimed that for straight men to desire only biological women “should be an outlier and marginal position.”

Jones continued the barrage of tweets, some of which cannot be published on this site, basically characterizing heterosexual-only attraction as “misplaced and inappropriate.”  He tweeted that the number of men who are looking just for a female mate is “artificially inflated by social stigma and biases.”

Jones somehow discerned that straight men “want us but refuse to ever admit it, and cover it with transphobia.” The male would-be-woman then counseled straight men that touching male genitals is “way less of an issue than most people think it is … It’s just flesh. You can probably deal with it.”

He repeatedly teaches that penises are simply part of a woman’s body.

Commenter Fred Brauer responded, “This is the epitome of delusional arrogance, the pinnacle of gross sense of entitlement and Left wing, culturally Marxist fomented narcissism!”

Brauer has a point, but here’s my take on this man. Of course, I don’t know him personally, but he has made a name for himself by entering the public arena as an “expert,” so I think it’s fair to critically evaluate what he purports to be universal truth.

I think this man, like so many, is simply desperate for love. He’s actually very self-revealing and admirably bold enough to become vulnerable. In a more honest mood, Jones admitted his “depersonalization.”

“It’s not just depression. It’s not just anxiety. It’s called depersonalization — a sense of unreality, estrangement from your own feelings, and separation from the world. And it’s a surprisingly common symptom among trans people.”

Jones has repeatedly written about his depression quite candidly:

Unfortunately, he blames the cause of his inner-disassociation on societal rejection, and separates his depression from his gender dysphoria as if they are unrelated. “Transitioning meant checking one thing off the list. Treating my depression is checking off another thing. However long that list may turn out to be, I’m chipping away at it.”

Honest words from a genuine seeker.

But my hope for this honest man is that he might continue to look, perhaps a little deeper, into reality. I would share with him that the Truth he seeks so urgently, is a Person.

Saint Augustine explained that we are “restless until we find our rest in God.” Others have described the universal human condition as having a “God-shaped hole” inside, which nothing and no one can fill except the Lord Jesus Christ.

Only a relationship with God our Father through Jesus Christ His Son can.

My prayer for “Zinnia” is that he continues to “chip away” until he finds “The Way, The Truth, and The Life,” the God Who is Love, to fill his emptiness.