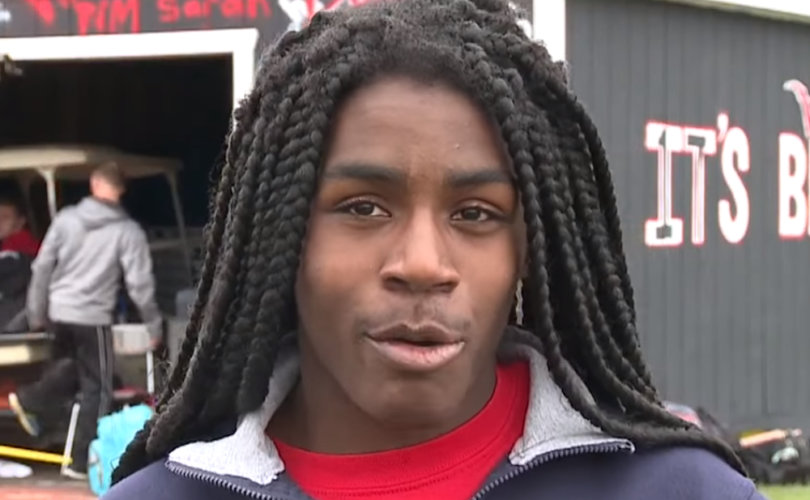 June 21, 2017 (Mission America) — With Wonder Woman’s revival, think about this. What is your picture of the ideal woman?

It probably doesn’t include theft. And most likely, it starts with women who are not actually guys, which is the kind of question one must consider in today’s wacko culture.

How about women who readily discard their beautiful design as females to try to “become” males? Yes, they would be automatically disqualified.

Some are the fruits of the spirit named in Galatians 5:22-23.

But back to thinking about theft. There’s the recent bad example of a Connecticut boy who identifies as a female. He finished first in several state high school track competitions, running as a girl.

Fifteen-year-old Andraya Yearwood is the boy and his success knocked out other top contenders who are authentic girls. And as Breitbart.com reports, Yearwood has undergone no cross-sex hormone treatments in the vain hope of transitioning to a female body. Impossible, as we know, but confused boys are often prescribed estrogen as teens regardless.

So his “girl” thing is 100 percent imagination. Why not just stay home and simply imagine winning the meets themselves? Shouldn’t Connecticut school athletic officials honor his identification as the winner, as long as unfounded fantasy apparently rules?

This confused young fellow has essentially stolen first-place positions that in fairness would belong to biological girls.

When are feminists going to defy cultural norms to say “no” to males who ruin opportunities for real females? Camille Paglia, an open lesbian, is speaking out to say biological change is impossible. Yet she reminds us that in the U.K., feminist icon Germaine Greer stood up for real instead of fake women and got blasted for it.

It is a quandary for committed hard leftists, since club membership requires adherence to everything the insatiable “LGBTQ” culture-wrecking machine demands, but even feminists probably have their limits with sexual minority politics.

If we are searching for good role models for young women, among them would not be those glorified by the popular culture despite their atrocious, inhumane beliefs — women like Cecile Richards, Madonna, Linda Sarsour, Kathy Griffin, Katy Perry, Michelle Obama, Lady Gaga, Nancy Pelosi — and Hillary Clinton.

Clinton still thinks she lost because of “misogyny.” No, she lost because she is a calculating liar, a probable criminal whose treasonous actions and immoral beliefs would endanger Americans, born and unborn.

There were far better candidates, women and men. And that’s why she lost.

Is it “misogyny” to dislike the idea of men posing as women? This does get confusing. How about females who are dying to be males?

It’s not just Yearwood who is the center of well-deserved controversy for usurping the accomplishments of natural girls. Mack Beggs, a teen girl taking testosterone to attempt a masculine transition, wrestled on the girls’ team in Texas and won.

But her gender-transition drugs, not permitted to other girls, bulked up her body and muscle, and she beat all the competition. One of the fathers of a competing team member sued Beggs because wrestling against her brings “imminent threat of bodily harm” to other girls — those not allowed to use performance-enhancing drugs.

Beggs would really prefer to wrestle boys, but Texas state law requires a student’s birth certificate — a.k.a. reality — to be the standard.

So Beggs stole these titles, because she did not play by the same rules as every other girl. Today’s sexual and gender outlaws readily adopt an entitlement mentality that demands all previous guidelines be suspended to accommodate their mistaken identities.

In a spirit of true equality, every girl on these teams should be held to a standard permitting medication for real illness only.

But in too many places in America these days, gender “fluidity” opens every door. Even our military now gives training on gender confusion that anticipates the situation where a “man” becomes pregnant.

It does until you hear about the actions of Jaelene Hinkle, who sacrificed her place on a highly-esteemed team to honor her Lord Jesus Christ.

Hinkle claimed personal reasons for her departure, but avoiding the “pride” endorsement seems the most likely explanation based on her previous courageous public stance on this issue. Hinkle makes her faith very prominent on her social media posts. Her Twitter page includes this passage from Colossians 3:23: “And whatsoever ye do, do it heartily, as to the Lord, and not unto men.”

When the Supreme Court ruled in favor of same sex so-called “marriage” in 2015, Jaelene converted the homosexual “equal” sign used by the Human Rights Campaign and ubiquitous on social media, into a cross, and she posted this on Instagram:

“I believe with every fiber in my body that what was written 2,000 years ago in the Bible is undoubtedly true. It’s not a fictional book. It’s not a pick and choose what you want to believe. You either believe it, or you don’t. This world may change, but Christ and His Word NEVER will.

“My heart is that as Christians we don’t begin to throw a tantrum over what has been brought into law today, but we become that much more loving. That through our love, the lost, rejected, and abandoned find Christ. The rainbow was a convent [sic] made between God and all his creation…”

Hers is the example of womanhood we should be honoring, not pretenders and deceivers. And I am guessing that there are even a few feminists who might agree.

With the power of God on our side and His values guiding us, we can all be wonder women — and men.

Reprinted with permission from Mission America.