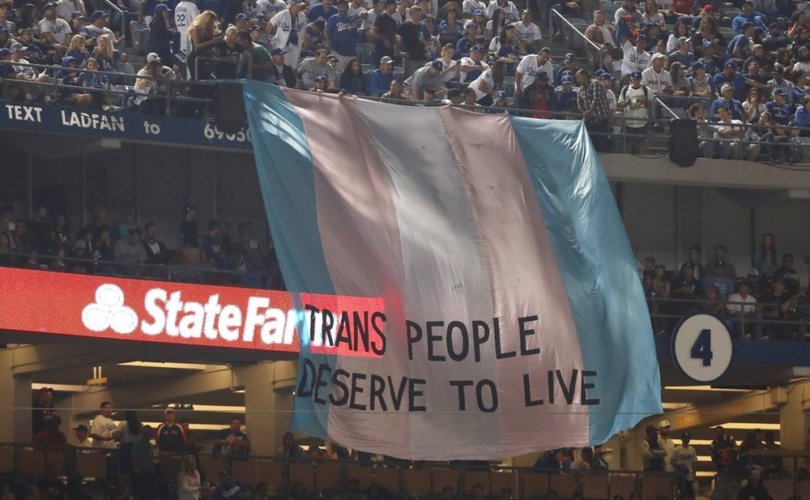 September 27, 2019 (LifeSiteNews) – Transgenderism is a revolt against normalcy. It is something that would have been hard to imagine just a few short years ago. And yet, here it is in an advanced stage that's affecting medical ethics, the law, and even women sports. Current trends show the landscape for “LGBTQ” rights are fast evolving to give these people the same legal status under the law as, say, racial minorities. In the media, transgenders are typically presented as persecuted minorities.

A recent case in point is Beto O'Rourke when he ignorantly said, “I would be afraid if I was a trans woman of color, who could be killed with complete impunity (emphasis mine) in this country right now with no one to follow up or investigate.” Yes, O'Rourke is a flake, but the media are not far behind his hysterical exaggerations.

An obvious question is what comes after transgenderism is fully digested and its acceptance forced on society by the powers-to-be? This is the question asked by Wesley Smith, a senior fellow at the Discovery Institute's Center on Human Exceptionalism. Smith begins his answer by noting that a California Court of Appeals recently ruled a Catholic hospital could be sued for refusing to perform a hysterectomy on a woman wishing to be a man. The operation was demanded not due to any physical health problem, but only because the woman wanted to be recognized as a male.

Without a true medical need, to do a voluntary hysterectomy is a form of mutilation. It's the same with the horrid procedure of turning a penis into a vagina as a man tries to become a woman. But common sense and traditional medical ethics no longer apply. Radical individual identity now rules the roost.

Transgenderism can be looked at as an extension of the mental illness called “body identity integrity disorder” (BIID). A person afflicted with BIID yearns to be made disabled in order to their ”true self.” It is common for BIID to express itself as an obsession to have a healthy arm or leg amputated or to be blinded. “Some even yearn to have their spinal cords severed so they can be paralyzed and use a wheelchair.”

BIID is an advanced form of apotemnophilia, which is defined as the uncontrollable desire to amputate healthy limbs or where the person wants to be a paraplegic.

At this point, Smith asks what is the essential difference between a biological male identifying as a female and demanding body-modifying surgery and a healthy person who perceives their true self to be an amputee also demanding an operation to attain the desired physical state? Answer: There is no difference. The overriding control factor is individual identity.

Transgenderism is being forced on society through the corruption of medical ethics, court decisions, enacted legislation, and tremendous media pressure, and BIID can't be far behind. As with transgenderism, policy advocates are starting to assert that BIID is not a mental illness and that the patent's desire for amputation should be accommodated.

Surgery is found helpful in all subjects who underwent amputation and those subjects score significantly lower on a disability scale than BIID subjects without body modification.

Amputation of the healthy body part appears to result in remission of BIID and an impressive improvement of quality of life. Knowledge of and respect for the desires of BIID individuals are the first steps in providing care and may decrease the huge burden they experience.

Smith writes that influential bioethicists are arguing in the most prestigious medical and bioethics journals that doctors are ethically obligated (emphasis mine) to provide interventions requested by patients if the medical profession has accepted them as medically appropriate and ethical. Ezekiel Emanuel — remember him, a prime architect of ObamaCare — is one of these so-called bioethicists. Writing in the New England Journal of Medicine, Emanuel brings out his inner fascist by arguing that doctors who refuse to do certain procedures for religious reasons or because they believe the intervention is biologically harmful should be kicked out of medicine. He says:

Health care professionals who are unwilling to accept these limits have two choices: select an area of medicine such as radiology, that will not put them in situations that conflict with their personal morality or, if there is no such area, leave the profession.

Where's this all going? Smith concludes by writing: “Unless this cultural rot is staunched, I give it maybe 10 years before disabling surgery is routinely permitted in Western hospitals, and 15 years before hospitals and doctors lose the right to say no.” Given the rapid pace in which societal norms have been trampled over in the past few years, it is hard to argue with this assessment.

The whole slew of cultural changes that society is being put through is part and parcel of the progressive left's revolt against the established order and traditional Christian values in particular. It is nothing short of the Left raging against God. Without the consideration of God in the equations of life, man left to himself can do the craziest things and think them good. As more godless people occupy important positions such as in the bioethics community, society is led further and further afield from what is normal and healthy.

This cannot end well. Either America has an awakening or it eventually goes over the cliff.