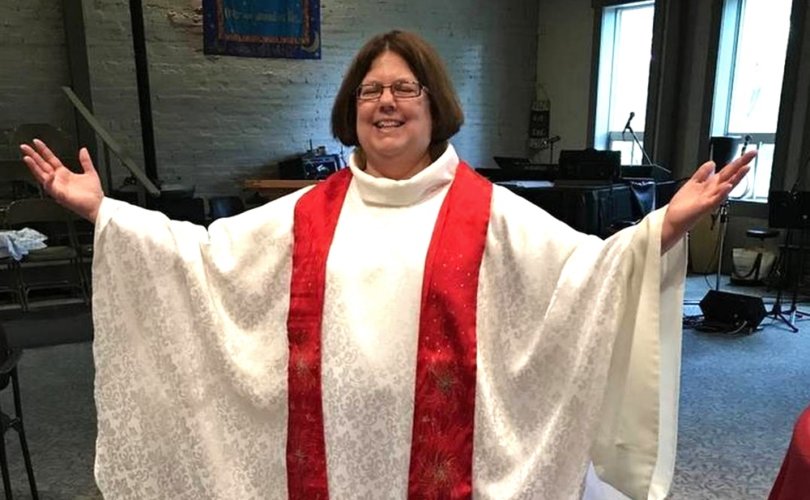 VIENNA, Austria, June 21, 2018 (LifeSiteNews) — Austria’s Cardinal Schönborn, while saying women priests would be too “profound” a change in the Catholic Church, nevertheless indicated that he was open to the introduction of women deacons.

There is historical evidence that there once was, in ancient times, a class of women some call deaconesses. Their function was to chaperone female catechumens in the era of full-body-dunking baptisms. When those damp days ended, the deaconesses’ chaperonage became redundant. Christian women called to serve the Church in a special way entered into what became the rich tradition of female consecrated life, first as desert mothers, then as cloistered, contemplative nuns, and then also as religious sisters active in the world.

In the 20th century, a new kind of deaconess–or Anglican woman deacon–appeared on the scene. Her only function, as far as I can see, was to be a Trojan horse, leading to the sacking of Anglican orders and the increasing irrelevance of the Church of England, not only in England, but in the worldwide Anglican communion.

The Trojan Horse in England and Scotland

“They were the thin end of the wedge,” my husband Mark told me.

Mark was the secretary of the traditionalist Forward in Faith Scotland in the mid 1990s. He attended Council meetings of the international body in London. At the time, the principal concern of “Catholic-minded” Anglicans was what would become of them now that women had been admitted to the presbyterate. Sacraments performed by women were invalid, they argued. Anglican sacramental integrity had vanished.

“The real question was not ‘should we let women be priests?’,” Mark told me, “but ‘is it even possible for a woman to be a priest?’ Because, if it’s not, and we are attempting to ordain them anyway, then the sacraments reserved to the priesthood would be invalidly performed by them.”

Before women deacons were introduced–in Scotland in 1985 and in England in 1987–Anglicans were told by most proponents that this was not an attempt to create a female priesthood. They insisted that this was an issue in its own right and was about women exercising a specific ministry within the church. However, once women were in the Anglican diaconate, the proponents of women’s ordination “naturally” wanted to progress to the next stage of orders, which is the presbyterate, Mark told me.

The issue is that there are three grades in the Sacrament of Orders, each of which conveys an indelible mark on the soul: the diaconate (deacons), the presbyterate (priests), and the episcopate (bishops), he added.

“The whole thing hangs or falls on whether women can be in orders or not. And both the proponents and opponents of women deacons in the Anglican Church realized that,” Mark continued.

“And it’s quite obvious for many Catholics that this applies now regarding women in the diaconate.”

Women were first ordained to the Anglican priesthood in England and Scotland in 1994. The result was internal schism. Like many of the Anglo-Catholic party, Mark simply avoided the ministrations of any Anglican clergy, male or female, who supported women’s ordination. Traditionalists tried to get episcopal oversight only from bishops who did not themselves ordain women.

“This was very difficult in Scotland,” said Mark, “but that option was guaranteed in certain circumstances in England.”

The next stage, he said, was female bishops, for which calamity Mark’s party created “exit plans”: either to create an independent Anglican province, which might reunite with Rome as a body, or to convert to Rome right away as small groups or individuals.

Mark’s own exit took place in 2008 when he became a Roman Catholic. As not only an Anglo-Catholic but an Anglo-Papalist he had always prayed for reunification under the pope.

The Trojan Horse in Canada

How a tradition-minded Anglican parish in Canada was brought to accept women priests was explained to me by an Anglican friend.

In short, the pro-priestess party (including my friend) worked on the affections of the anti-priestess party for a woman in the parish who had already done them all good service in various roles.  To paraphrase, the first group asked the second, “But hasn’t X done such a wonderful job as Y? Why don’t you think X would make a wonderful deacon?”

I was torn between sorrow for the kind-hearted, manipulated Anglicans and for the Catholic women at my theology school who wanted to be priests so badly, they cried at our male classmates’ diaconal ordinations.

Women who long to become Catholic priests are not all sexually-active idiots with hideous haircuts who get themselves “ordained” by dodgy “bishops” on boats. Some women who fervently believe they are “called” to the Catholic priesthood–with the diaconate as a step along the way–are excellent, intelligent, compassionate and chaste women. This does not mean they aren’t wrong, however.

We are living through the worst crisis in Church history, and faithful Catholics are assaulted day after day with evidence of the failures of too many leaders of the Church’s all-male priesthood. The pressure to admit women—who, whatever our many failings, at least have a self-protecting aversion to sexual promiscuity–to the priesthood is likely to become ever stronger. But we will have to resist it, rejecting the Trojan horse that is the female diaconate.