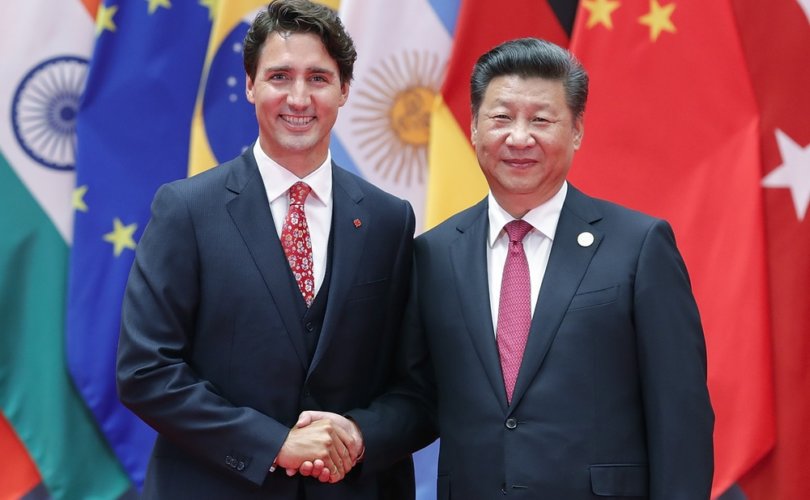 (JCCF) – Human rights violations by China’s Communist regime are well known. Those who dissent peacefully against Communist Party rule — or even against unjust laws — can find themselves persecuted and imprisoned.

The regime harvests the organs of Falun Gong practitioners who have been sentenced to death, creating a booming transplant trade that is worth about $1 billion a year. Chinese websites have advertised hearts, lungs, and kidneys for sale and available to book in advance, suggesting that the victims are killed on demand.

Since 2017, more than one million Uyghurs and other Muslims have been arbitrarily detained in internment camps. Documented human rights abuses include forced abortions, forced sterilizations, forced labor, torture, physical and sexual abuse, mass surveillance, family separation, and repression of cultural and religious expression.

In addition to these ruthless jackboot tactics, Chinese socialism also inflicts soft totalitarianism on citizens through a “social credit” system by which government monitors the whereabouts, activities, and behaviours of the Chinese.

Citizens with a low social credit score will find themselves banned from boarding trains and airplanes, excluded from better schools, prevented from patronizing hotels or restaurants, and in some cases registered on a public blacklist for all to see.

Soft and therapeutic totalitarianism comes under the guise of helping and healing. Its victims are culturally blocked from having a prominent public platform or career. They are quietly canceled out of public, social, and professional life, without the threat of jail, torture or death.

As the Charter enters its 41st year of becoming part of Canada’s Constitution, we have not yet seen a great deal of harsh and militaristic tactics used in Canada. In Alberta, three pastors were jailed because Jason Kenney’s government chose to go to court and obtain injunctions to escalate enforcement of health orders, rather than relying on regular law enforcement like the other nine provinces did.

In Ottawa, police arrested peaceful protesters at gunpoint, police horses injured at least one woman, and unarmed protesters were beaten with police truncheons. Pastors in Alberta jails and Emergencies Act brutality aside, authoritarianism in Canada has been mostly of the softer variety.

Many Canadians acquiesced to soft totalitarianism when they accepted vaccine passports from September 2021 to early 2022 with little outcry or protest. A government with the power to exclude you from society over your refusal to get injected with a new substance which lacks long-term safety data can also make you a second-class citizen based on other private and personal decisions that the government deems to be unacceptable.

Why assume that second-class citizenship will be based only on vaccination status, and not on other factors chosen by government, as China has done with its social credit system?

— Article continues below Petition —
PETITION: Tell the CPC to reinstate conservative leadership candidates!
Show Petition Text
5370 have signed the petition.
Let's get to 6000!
Thank you for signing this petition!
Add your signature:
Show Petition Text

Vaccine passports were imposed in spite of the fact that COVID is not the Spanish Flu of 1918, as was claimed by Dr. Neil Ferguson of Imperial College London in March of 2020, causing the world-wide panic that led to lockdowns. Vaccine passports were imposed after every provincial government in Canada had a full 18 months to increase hospital capacity to make room for COVID patients.

Governments then kept vaccine passports in place long after vaccine manufacturers themselves had stated publicly that the vaccines do not stop the spread. Vaccine passports were still kept in place even after it had become obvious to everyone that vaccines were not stopping the Delta and Omicron variants from spreading.

Vaccine passports were kept in place even while so many vaccinated Canadians got sick with COVID. Regarding Canadians who have not had two covid shots, the Federal Government continues to violate their Charter right to enter, remain in, and leave Canada. Even flying within Canada is illegal for Canadians who exercise their Charter right to bodily autonomy. In short, don’t expect governments to follow science, other than political science.

The digital ID and other new technologies will empower governments to control all aspects of Canadians’ lives. For example, the government could very easily create the “love passport” or the “tolerance passport,” to ensure that any Canadian who visits a website that the Prime Minister deems “hateful” will be barred from flying on an airplane.

Domestic and international travel could easily become a privilege for Canadians with the “politically correct” opinions about vaccines, immigration, abortion, lockdowns and other issues, to exclude the “racists, misogynists, anti-science extremists” who were so denounced by our Prime Minister in 2021.

Of course, these new and bigger violations of Charter rights and freedoms will be sold and presented as “scientific,” convenient, and for the common good, in just the same way that vaccine passports were sold, promoted, and imposed.

Adding a new digital currency to the digital ID will make it amazingly easy for Canada’s federal and provincial governments to track citizens’ donations, to ensure that nobody is supporting the “wrong” cause, movement, church, synagogue, temple or mosque. The Federal Government used this tactic only two months ago during the freedom convoy, and Canadians have lost jobs over it.

If any of the foregoing sounds conspiratorial, bear in mind that only two years ago it was a “conspiracy theory” that vaccine passports would be imposed on people, and used to pressure or coerce everyone to get injected with a new COVID vaccine. No, the “conspiracy theories” occur everyday in the communist China which Mr. Trudeau so much admires.