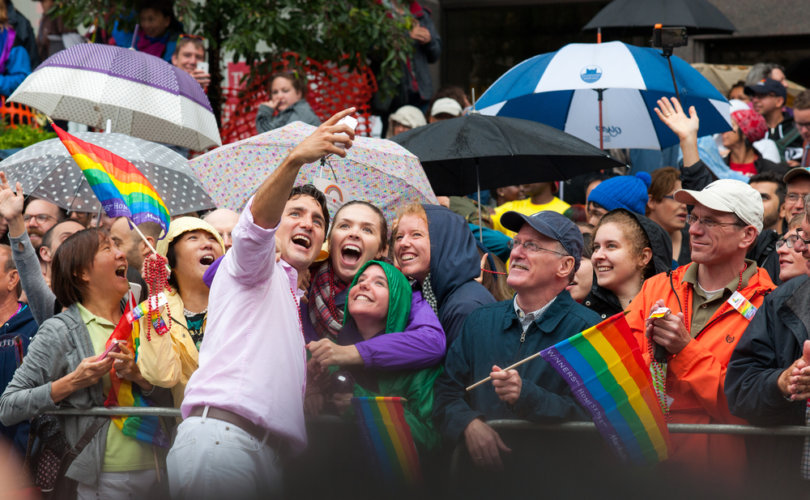 March 31, 2016 (REAL Women of Canada) — Prime Minister Justin Trudeau seems unable to think independently. He merely goes along unquestioningly with whatever is politically correct.  The latter is determined by the media, and the so-called “intellectual elites” who actually aren’t all that sharp because none of them dare think or say a word that swerves the tiniest bit from left wing thought.  To do so might confuse the young, and would likely also lead to the loss of a job.

It is not surprising, therefore, that Trudeau has decided to jump into the 2016 Toronto Gay Pride Parade – the first time a Canadian Prime Minister has done so. Trudeau apparently believes that his participation in the parade shows liberal values and his “tolerance”.  He never considers that by doing so, he comes across as immature, and as a narcissist (who does so love his selfies) with little understanding that he is supposed to represent all Canadians, not just his “friends” and special interest groups.

Further, Trudeau, with his customary practice of handing out the taxpayers’ money to his friends and supporters, has agreed to present the Gay Pride organizers with a gift of $140,200.00. This money will be added to the $270,000.00 provided by Ontario’s lesbian Premier, Kathleen Wynne, as well as $160,000.00 from Toronto’s city hall.  The latter grant undoubtedly is in recognition of the fact that Toronto has, living in its midst, the highest number of homosexuals in Canada.

It is strange that other Toronto parades don’t receive public funds, such as the beloved Santa Claus Parade, or the St. Patrick’s Day Parade, or the lively Caribana Parade. Instead, they stand on their own financial feet. Could it be that they are not politically correct, and therefore, of no interest to the Prime Minister?  Why does the homosexual parade get tax money?  The organizers claim that their parade draws a million people and millions of dollars in business.  This number is absurd.  If a million people were watching the parade, the crowds would have to be 80 deep along the 3.1 kilometer parade route, which, of course, is not the case.  The total number of people can be generously set, at most, at approximately 154,000 persons.  As stated by Toronto Sun Columnist, Mike Strobel, (February 24, 2016), the homosexual numbers are “utter bunk”.

If Trudeau wants to shower his friends with money, he should do so with his own funds, not that of the taxpayers. He seems to think, however, that as Prime Minister, he can spend whatever federal money he likes.  No wonder it is expected that Canada’s deficit, according to Toronto-Dominion Bank economists, will skyrocket to $30 billion in 2016.  This is a long way from the “modest” $10 billion Trudeau claimed during the election.