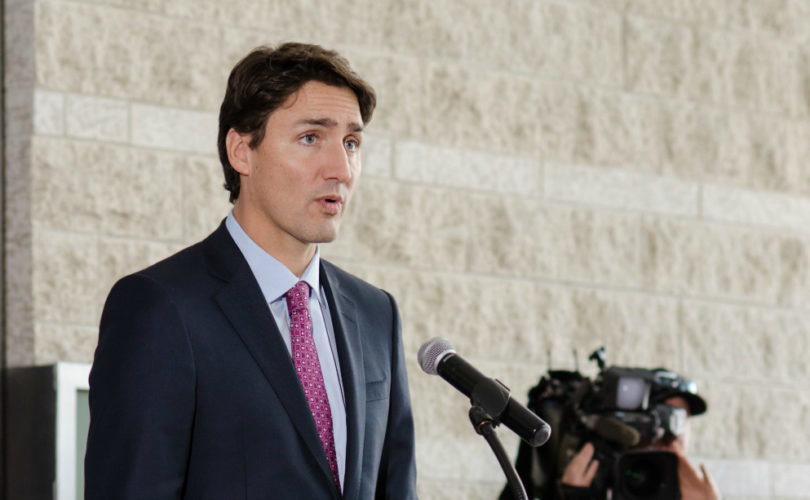 September 24, 2015 (LifeSiteNews) — The links between violence against women and family breakdown, misogynistic music, and pornography are so well known and established that one can only be amazed at the hostile reaction from some left-wing columnists when Liberal Leader Justin Trudeau stated the obvious at a feminist forum in Toronto.

Trudeau was responding to a question about recent examples of public violence by young males against women, such as making obscene remarks to female journalists while the latter are on camera, in the field. He replied:  “I think there’s probably an awful lot of factors that come together to shape societal behaviour — whether it’s certain types of music? There’s a lot of misogyny in, you know, certain types of music. There’s issues around pornography and its prevalence now and its accessibility, which is something I’m really wrapping my head around as a father of kids who are approaching their teen years. And there’s also just the shifting parental roles as well. There’s a lot of communities in which fathers are less present than they have been or they might be in the past, and there’s more need to have engaged positive role models.”

Toronto journalist Desmond Cole then tweeted that Trudeau’s comments represented “subtle racism” because “two of the three factors Trudeau cited about violence against women are well-worn stereotypes about black people.” In other words, Trudeau was being a racist because he did not specify that he was talking about all racial communities, and not just Blacks, even though he never did say anything about Blacks at all.

Edmonton columnist Paula Simons, writing in the Edmonton Journal (and reprinted by the National Post), then got into the (comedy) act with a piece headlined “Please Don’t Tackle Violence Against Women with Pop Sociology.”  This is exceedingly ironic, because Simons offers no kind of sociology at all to rebut Trudeau. She tells a personal story, and then follows with the oldest and weakest argument against any generalization, which is, “I know several individual cases contrary to the generalization.”

Thus she writes, “There are some misogynists who grew up in single-parent families without strong male role models — and there are also some who learned their behaviours by watching their fathers beat or berate their mothers.” If her column had stopped at that level of inanity, it would just be a joke. But Simons goes further into Leftist ideology: “In fact, I’d argue that religious and cultural pressures to stay married often trap women in abusive relationships — and that our gradual lessening of the social stigma around divorce has saved many, many women from years of chronic violence and emotional abuse.”

This couldn’t be wronger. Simons can “argue” all she wants—she is a columnist, after all—but if she had done an iota of research she would have found plenty of evidence from real sociology that clearly supports all Trudeau’s remarks.

Yes, it turns out family breakdown, pornography and Black rap and hip-hop music are all linked to violence against women. With two seconds’ Googling I found “The Influence of Misogynous Rap Music on Sexual Aggression Against Women,” from the Psychology of Women Quarterly. It played a variety of rap music to college males and found those played the misogynistic songs then made violently misogynistic choices in terms of which film excerpts to then show to co-eds. The researchers concluded, “Misogynous music facilitates sexually aggressive behavior.”

And then there was “Rap and Hip-Hop Music: An Analysis on Audience Perceptions of Misogynistic Lyrics,” from the Elon Journal of Undergraduate Research. Its conclusion: “Continued audience exposure to misogynistic lyrics in popular rap/hip-hop music influences college students’ attitudes toward the issue of domestic violence.”

Pornography’s link to violence against women can be similarly demonstrated, though this is a divisive factor within feminism, because some see access to pornography as an element in sexual liberation. Others see it, like rap music, as sending a set of messages to young men including the “Rape Myth”—the idea that violent sex is desirable to women.

What about the breakdown of families, which translates usually into the absence of the father?  Sociologist Pat Fagan, who analyses and consolidates research in these areas for the Heritage Foundation and the Marriage and Religion Research Institute, summarizes his findings.

“Over the past thirty years, the rise in violent crime parallels the rise in families abandoned by fathers. High-crime neighborhoods are characterized by high concentrations of families abandoned by fathers. State-by-state analysis by Heritage scholars indicates that a 10-percent increase in the percentage of children living in single-parent homes leads typically to a 17 percent increase in juvenile crime.

The rate of violent teenage crime corresponds with the number of families abandoned by fathers.” So boys without Dads are more violent generally.

But do children in stable marriages learn how to batter their future wives by watching their fathers beat their mothers, as Simons claims? No doubt in some cases. But the research shows women who leave violent marriages enter new violent relationships. This time their partner is not the natural father, and so is much more inclined to assault or sexually molest his girlfriend’s children. (Oops, those Toronto feminists apparently weren’t interested in violence against children). Mothers too are safer in their original, albeit abusive relationship than in a new one.

There’s more. According to a ground-breaking study by the U.S. National Center for Injury Prevention and Control, women are as violent as men are towards women in intimate relationships. It found: “44% of lesbian women, 61% of bisexual women, and 35% of heterosexual women experienced rape, physical violence, and/or stalking by an intimate partner in their lifetime.” And what about men? Hetero relationships are safest for them too: they are more likely to be stalked or raped in homosexual or bisexual relationships.

There is a theme emerging here and it couldn’t be less politically correct. The safest place to be is an intact (never divorced) heterosexual marriage. The more a relationship diverges from the traditional, natural model, the more violence. Everyone has the capacity for violence (as Christians we would argue that this an aspect of our Fallen natures) but institutions such as marriage and churches mitigate this violence. The research is in.

So why do people like Cole and Simons argue against it?  Perhaps as Leftists they believe that economic relationships come first and ideas follow: farmers invent one kind of god and one kind of government and industrial societies invent a different god and different government. Hip Hop and pornography, as ideas, cannot be the causes of violence against women. They must be the effects of an economic and social structure that subjugates women to men.

Nobody in that Toronto crowd wanted to hear that the solution to violence against women was to get married and stay married—and by the way, go to church weekly, but those are all actions an individual can take without government intervention, and they are actions shown to be effective by serious scholarship and millennia of common sense.

Though it pains us to admit this, Trudeau is on the right track on this one. His critics couldn’t be more wrong.