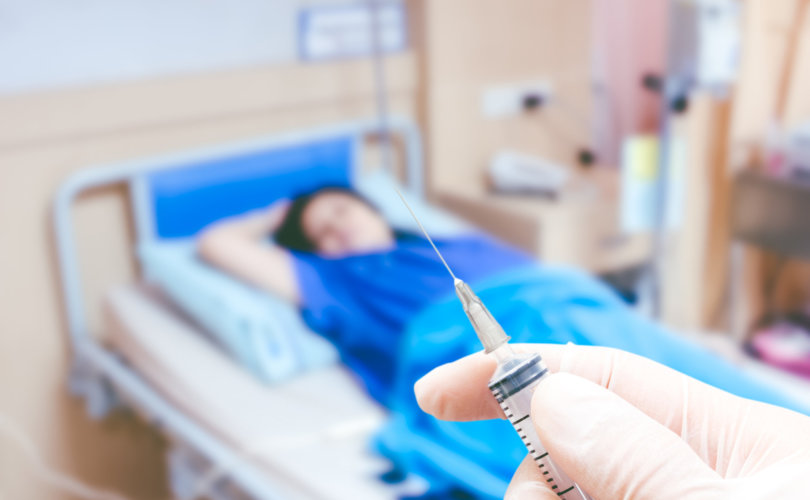 (Campaign Life Coalition) – As the euthanasia death-toll rises in Canada and the government expands its criteria for killing, more Canadians are being targeted. More of us are at risk.

That’s why I recently published a short, 34-page book titled, Trudeau’s MAiD Service: A Euthanasia Program for Canada. This book is a concise exposé of Trudeau’s euthanasia scheme.

Canadians need to know the truth about legal euthanasia – who it is killing and how it is corrupting our healthcare system. We need to recognize the evil our government has unleashed.

Up until 2016, euthanasia was rightly considered an act of murder under Canadian Law. However, with the support of a radical Supreme Court ruling, the Trudeau government decreed doctors and nurses could murder their terminally ill patients, if they “consent.”

This initial class of “candidates for killing” – the terminally ill – was soon expanded to include those who are not even dying. Disabled Canadians were added to the “eligibility list” in 2021. Next, those experiencing depression or other forms of mental illness will be added, starting March 17, 2023.

READ: How Canada’s Supreme Court created the most permissive euthanasia law in the world

I felt a particular burden to write this book in light of the impending addition of depression as a criterion for euthanasia. I don’t often share this, but I have struggled with depression throughout my adult life. In fact, 25 years ago, I was in such a terrible state that I had even contemplated suicide. If euthanasia had been available back then, and my doctor suggested it, God only knows what would have happened.

Now what will happen to those facing similar struggles with depression next March?

Currently, we know that the number of those killed by Trudeau’s euthanasia program has been skyrocketing year after year. Check out these disturbing statistics below, found on page 17 of my book:

Did you realize that over 30,000 Canadians were euthanized, in total, over the first five years of the program? That’s roughly equal to the population of Stratford, Ontario. Imagine the entire city of Stratford wiped off the map without any major political fuss or outrage!

And how will these statistics multiply once those who are suicidal start receiving government assistance to commit suicide?

Unfortunately, I believe many Canadians have been terribly misled concerning Trudeau’s euthanasia program. Masquerading under the sweet-sounding euphemism of “MAiD” (short for “Medical Assistance in Dying,”) the government claims euthanasia is all about “helping” people die with “dignity” and “compassion.” But that’s simply not true!

Trudeau’s Orwellian “MAiD Service”, offered for free to those most vulnerable, is actually a murderous, population-reducing, cost-cutting scheme. It is a satanic substitute for real, compassionate, life-affirming healthcare. Even the World Medical Association denounces euthanasia as unethical.

In a striking parallel to the Nazi T4 euthanasia program in 1930s Germany, our liberal government’s euthanasia program has also convinced many people that some lives are “unworthy of life.” Our society is starting to believe that lie. Our healthcare system is proclaiming that lie in not so many words. And more and more “consenting” Canadians are losing their lives to that lie.

It is my hope and prayer that my new book, Trudeau’s MAiD Service: A Euthanasia Program for Canada, will shine a bright light on this dark practice of legalized euthanasia in Canada. If we want to stop this evil from spreading, people need to see it for what it is: MAiD is murder; and no one has the right to murder!

If you are interested in a copy of my book for yourself, or would like to share it with friends, family, your doctor, pharmacist, or other healthcare professionals, it is available at Baptist House or on Amazon.

I am hoping to get this book into as many hands as possible, especially our politicians. In fact, I am personally planning to send a copy to every Member of Parliament.

In closing, I want to ask you to consider making a donation to help CLC in our continuing efforts to stand up for the sanctity of human life from conception to natural death. We are working hard everyday to promote a culture of life in Canada and to refute the lies of the one who “was a murderer from the beginning” (John 8:43).

Help us to shine the light of life across this land!