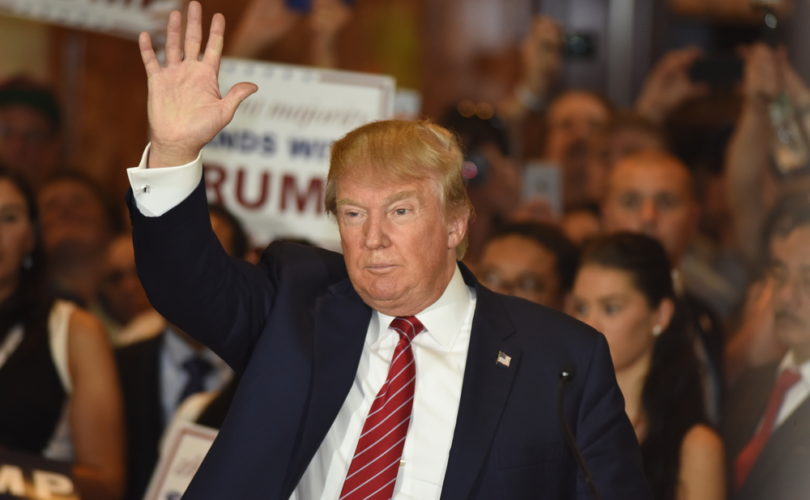 March 9, 2016 (Bound4Life) — In my decision to vote for a candidate in an election, the right to life is the most important issue I consider. Perhaps it is because my own life was saved and redeemed from abortion. I am alive today because my Chinese mother broke the law and gave birth to me.

Raising my sisters and me in communist China, where a violent family planning regime forces mothers into aborting additional children, my mother risked her life and safety to keep us from being taken by armed government agents.

We are talking about real lives here. I am one of them. My son, Zeke, is another. Diagnosed with Hypoplastic Left Heart Syndrome in utero, our doctors adamantlypressured us to abort him.

My husband and I refused. We raised him, loved him and were completely blessed by him… until we buried him just two months ago when he passed away at the age of seven. We have never regretted our decision.

Yet every day I think about the millions of babies who weren’t so lucky and never had a chance at life, because “pro-choice” advocates and our very own laws have told women it is okay to discard their children for whatever reason imaginable.

Yes, the issue of life is very dear to my heart and something my conscience will not allow me to compromise on.

Which brings me to the trouble with Donald Trump, the current Republican frontrunner. He came out making a lot of promises to the American people. Holding a tough line on immigration, promising to build a wall and calling out both parties for incompetence, he vows to “make America great again.”

Love him or hate him, his bold TV debate performances woke Americans up. He also claimed to be pro-life, but “with the caveats.” However, as the months of campaigning have gone by, we have seen him traipse back and forth on major issues—and the issue of valuing every human life has been no exception.

Trump’s views on abortion, past and present (very present—like this week), give me little confidence that he will fight for the pro-life cause. In 1999, Trump described himself as “very pro-choice.” Since then, however, he says his views have “evolved.”

Yet Trump has said his extremist, pro-abortion sister, Maryanne Trump Barry, would make a “phenomenal” justice. She argued for a constitutional right to the hideous practice of partial-birth abortion. Of course, he said a few months later that he’d have to rule her out now.

During this year’s March for Life, he was the only Republican candidate who said nothing about abortion, while all the other candidates vowed to defend every precious life—whether lives in the womb, special needs children or any innocent life. Trump extols the child almost aborted who becomes a “superstar,” though his views are uncertain if that child were ever a “loser” (to use his words).

He has also gone on record saying he is for the status quo of funding Planned Parenthood as it is currently being funded. Yet when he was forced to clarify his stance, he finally said he would sign a bill to defund it if he became president.

But apparently, he still, to this day, believes Planned Parenthood is an organization that “does do wonderful things.” He’s repeated that sentiment, also saying, it “does a lot of good” and “does a really good job.” Such views are right in line with Secretary Hillary Clinton, whose pro-abortion activism has defined her public policy for decades.

Yes, and the president of Planned Parenthood, Cecile Richards, thanked Trump for saying those nice, wonderful things about her abortion centers where 300,000 babies’ lives are lost every year—funded in part by $500 million of taxpayer money.

Excuse me? Did he not pay any attention last year to scandal after scandal that the Center for Medical Progress exposed? Of Planned Parenthood illegally selling baby parts, of executives callously haggling over the price of “intact” baby “specimens” to fund a Lamborghini, of workers admitting they sell “fresh” aborted baby eyes, hearts, and “gonads,” of abortionists illegally altering abortion procedures and using partial-birth abortions to procure baby organs?

What about reports that show Planned Parenthood lying to women to coerce them into choosing abortion, covering up sexual abuse of minors and spreading the lie that it provided mammograms when in fact they do not? Trump’s lack of true conviction to stand up for defenseless lives in the womb is truly disturbing.

But so is his disregard for human rights in general. He has praised Russia’s murderous Vladimir Putin. His ever-shifting, unprincipled assertions on national security lead to a joint letter of 117 longtime defense and diplomatic leaders, who say Trump would “make America less safe.” Perhaps we should not be surprised, because Trump has had a history of standing with oppressive governments.

In regards to China, my place of birth, he supported its government in the past for stamping out a student protest at the Tiananmen Square—when students fought for democratic rights in 1989. Do you remember seeing the video footage of a military tank running over a student as he stood there in protest of the cruel, violent regime?

As one who escaped communist China as a girl, I can absolutely testify that China’s record on human rights is detestable and should never, ever be praised by anyone. Because of the constant fear and terror we lived under, it was the happiest day of my parents’ lives when we received our passports to leave the country.

I never thought I’d hear a presidential candidate admire and take pointers from the Chinese government, the Russian government, or fascist leaders of the past. All the while, Americans have cheered him on and voted him higher on the presidential short list.

We have barely touched on his character issues, his level of indecency (as eloquently pointed out by author Max Lucado), his lack of understanding the U.S. Constitution, and the string of business failures, lawsuits and scandals.

Can we stop and think about what we are doing?

We know what’s at stake here. We are voting for the commander-in-chief of our nation, the leader of the free world and the moral face of America. With the recent death of Antonin Scalia, the next President will likely choose his replacement—and perhaps two more Supreme Court Justices, affecting laws in this nation for the next generation.

Just as Roe v. Wade was decided by the courts, the battle to end it will be fought in the courts. Are we going to take our chances on a candidate who has expressed little regard for human rights, whether lives in the womb or born?

The blood, sweat and tears that have been shed in the fight for life cannot be squandered on Trump when there are pro-life candidates like Senators Ted Cruz and Marco Rubio to consider. I’ve made my views known, while others have made their case.

Both of these leaders have phenomenal track records of consistently elevating life issues, crafting life-affirming laws and speaking with care to convince hearts and minds to join our cause.

It is not too late. I pray our next president will have a deep, unwavering conviction to stand for life. I pray America makes the right decision, that the rights of every human being may be advanced and protected in America—and abroad—for generations to come.

Lisa Smiley is a mother of four precious children, including one now with his Creator in Heaven. She earned a bachelor’s degree in philosophy from the University of California-Irvine. Lisa blogs at LisaSmiley.com as well as for Bound4LIFE International, a grassroots movement to pray for the ending of abortion, carry the spirit of adoption, and believe for revival and reformation. Together with her husband James, they raise their family in the Dallas area. Reprinted with permission from Bound4Life.