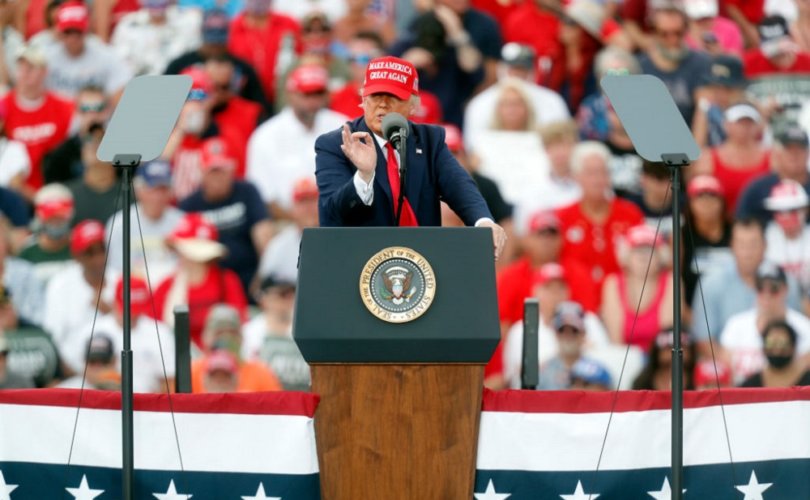 Normalcy may seem an unlikely theme for a re-election campaign, but it's one that strikes a chord in 2020, which has clearly not been a normal year. The fallout from the coronavirus has killed 220,000 Americans; locked down our economy; and forced people around the world to practice social distancing, wear masks, and work at home. Riots have plagued our cities, and the radical left has taken over the Democratic Party. Protesters have shown disrespect for and attacked the police. The “cancel culture” has removed longstanding monuments and brought our Founding Fathers into disrepute in the minds of many. At present, a presidential candidate whom many consider mentally incapacitated is leading in the polls.

— Article continues below Petition —
PETITION: Call for an additional Presidential Debate on Family Issues
Show Petition Text
7014 have signed the petition.
Let's get to 7500!
Thank you for signing this petition!
Add your signature:
Show Petition Text

The issues discussed during the three forthcoming Presidential debates will likely focus on the economy, public health, and defense and foreign policy.

But, the family is the cornerstone of American life and deserves its own Presidential debate.

And, if we don't act fast, issues like marriage, the right to life, parental rights in education and health, population control and declining fertility will be overlooked entirely or treated as an afterthought.

That's why LifeSite and the Ruth Institute are partnering on this important appeal.

Please SIGN our petition which urges the Commission on Presidential Debates to schedule a debate which focuses solely on family issues.

The purpose of the Presidential debates is to allow voters to witness an interchange between the candidates and to determine their position on issues which will impact their lives, as well as their rationale for holding those positions.

Of course, the economy, public health and foreign policy are all serious matters, but family breakdown and the over-sexualization of society create massive problems that affect the economy, the criminal justice system, public health, and even national defense.

A strong economy depends on the next generation learning the virtues of hard work and discipline in the family. Strong national defense requires individuals who are willing to sacrifice for their families, even more than the national interest.

And, the decline of the family in America’s cities has led to spiraling crime rates and urban unrest.

Simply put, family issues are key to the success or failure of the country.

And, therefore, the family must be a major focus of the debates.

We need to put the focus where it belongs. We need one debate exclusively on what the candidates will do to support the family.

Thank you for SIGNING this petition which urges the U.S. Commission on Presidential Debates and the candidates, themselves, to agree to a fourth debate focusing solely on family issues.

None of this is normal, and the idea that a permanent change has taken place is false. When they are asked, most Americans say they just want to “get back to normal.” That means they do not accept the idea of staying home; do not support the protesters or the cancel culture; and retain a positive opinion of Washington, Jefferson, Madison, and the other great leaders of our country. Also, there is what Forbes calls “a severe enthusiasm problem” for Joe Biden. Biden-supporters don't like Biden — they just want to register a protest vote against Trump. If Biden gets elected, the public won't like him any more than they do now.

What this suggests is that there is a strong desire to get back to normal. Ironically, this was the case exactly 100 years ago, when Warren Harding and Calvin Coolidge ran on the theme of a return to normalcy.

In 1920, Americans had a lot that seemed abnormal, and the parallels with 2020 are uncanny. America had recently exited the first truly modern war, and many soldiers had returned in shock. The great flu epidemic of 1918–19 had killed 50 million people worldwide, and the effects of the flu lingered. America was in the midst of a severe economic recession caused by unbridled wartime spending and economic regulation, and the president, who had suffered a paralyzing stroke, was governing “from his basement,” out of view of the public.

It's not surprising that President Trump has hit upon the same theme that elected Harding and Coolidge. It's surprising only that he has not pressed harder on the issue. Americans are tired of the abnormal riots, the coronavirus restrictions, an economy running at less than full speed, the disrespect for our flag and anthem — and for the police — and tired of a presidential candidate who ducks out of view and refuses to answer questions.

If the past is any guide, Trump and Pence will be re-elected in a landslide. Harding won the electoral vote 404 to 127, and he won the largest margin of the popular vote since1820, when James Monroe ran unopposed. Harding won all but 11 states, all of them in the traditionally Democratic South. Interestingly, it was the public's admiration of Coolidge's handling of civil unrest in Boston and the consequent Boston police strike that earned him a spot on the ticket.

Harding, by the way, was not the scandalous president he is sometimes portrayed as being. A member of Harding's Cabinet was convicted of accepting bribes, but Harding himself was blameless, and it was his commitment to free-market, small-government principles that propelled the nation toward unprecedented growth in the 1920s. When Harding died during his first term, Coolidge went on to serve as one of the most popular and effective presidents in American history. There is even a mild echo of Coolidge's 1924 election slogan, “Keep Cool with Coolidge,” in Donald Trump's current slogan, “Keep America Great.” The stage is set for another four years of peace and prosperity.

There are many differences between the 1920 and 2020 campaigns. The solidly Democratic South of earlier times is now mostly Republican, and it is now the Republican Party that represents working Americans while Democrats have become the party of the elite (and of their wards, the non-working, dependent underclass). Also, Trump's opponent in 2020 is far more radical than Harding's in 1920, a wealthy attorney whose views were almost as conservative as those of his Republican opponent.

Harding and Coolidge were successful in their call for a return to normalcy. Woodrow Wilson's second term — with 675,000 dying of the flu and 53,000 in combat in WWI, and with Wilson's abuse of the Espionage Act (to say nothing of his first-term establishment of the Federal Reserve and the personal income tax) —had been intensely unsettling. Americans longed for a return to the days before war, pandemic, and a president who was mentally incapacitated. They wanted the same things President Trump offers today.

Plagiarist that he is, Biden also speaks of normalcy, but as Ryan Girdusky writes in The Hill, Biden's idea of normalcy is “dangerous” because it “represents a return to the dangerous neoliberal consensus.” That consensus is Marxist in nature, and, as Girdusky stresses, “the working class would suffer” under a Biden presidency.

Normalcy simply means that which serves the fundamental needs of ordinary persons, and all that President Trump offers is profoundly normal in this sense. As the president says again and again, Americans want law and order. They also want a strong military so that we can maintain “peace through strength,” and they want to get past the coronavirus and go back to work.

There is nothing radical about the president's agenda, but there is a great deal of radicalism in Biden's proposals. If one adds it up, Biden's additional spending amounts to $7 trillion on top of the current federal budget of $4.79 trillion. That spending would lead to another downgrade of America's credit rating and with it the selling of dollars and unsettling of markets. America doesn't need another recession just when we are making our way out of the one this spring. And we don't need massive new federal programs, many of them for corrupt alternative energy boondoggles or more patronage spending by state and local governments. Biden wants to shovel money to states like Illinois, which ranks near the bottom in private-sector job growth and near the top in the number of public-sector jobs. The hallmark of a Biden administration — just as it has been of his past — would be corruption.

America needs a return to normalcy: fiscal responsibility; personal responsibility; law and order; defeat of the coronavirus; a return to work; respect for the police; and love of God, country, and family. This is the idea of normalcy that President Trump evokes in his campaign speeches, and I believe that it is what will re-elect him in 2020.

Jeffrey Folks is the author of many books and articles on American culture including Heartland of the Imagination (2011).