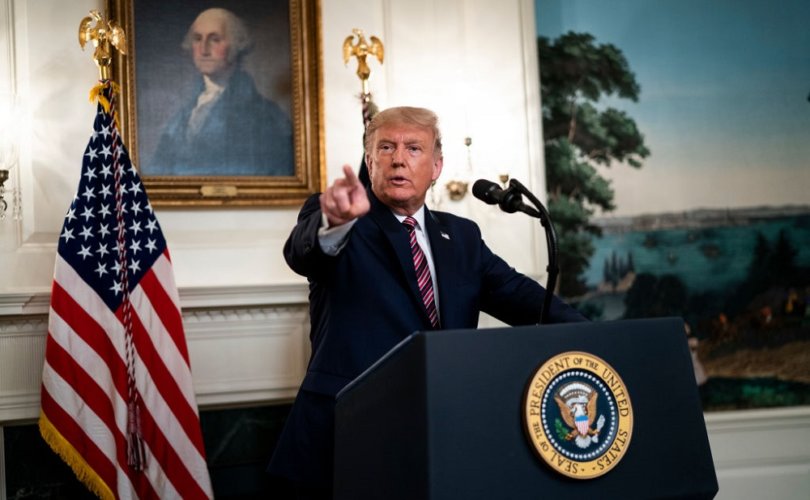 September 11, 2020 (Family Research Council) — President Trump took another step toward fulfilling his promise to “Drain the Swamp” on Friday when he authorized Office of Management and Budget Director Russell Vought to ensure that federal agencies no longer hold “woke” re-education trainings. The memo directs agency heads to “cease and desist from using taxpayer dollars to fund these divisive, un-American propaganda training sessions.”

The White House directive was drafted in response to reports that mandatory trainings told employees in executive agencies that “virtually all white people contribute to racism,” that racism is “embedded in the belief that America is the land of opportunity or the belief that the most qualified person should receive a job,” or forced them to admit they “benefit from racism.”

Christopher Rufo of the Discovery Institute has worked for the past six months uncovering how Marxist ideas have crept into our government on the taxpayers' dime. “What I've discovered,” he said, “is that critical race theory has become, in essence, the default ideology of the federal bureaucracy.”

Rufo's research has uncovered “wokeness” training programs in the Treasury Department, the National Credit Union Administration, Sandia National Laboratories, Argonne National Laboratories, the Department of Homeland Security, and the FBI. And of course, we've all seen more public examples, like the graphic from the taxpayer-funded Smithsonian Museum in July, which claimed to identify the nuclear family, Judeo-Christian values, and objective, rational, linear thinking aspects of “whiteness.”

The “wokeness” trainings are part and parcel of the civil unrest afflicting our cities. Last year, the New York Times embarked on a massive propaganda campaign, known as the 1619 project, to redefine America's founding as irredeemably racist. The 1619 Project has ushered in a summer of rioting in America's cities (and now suburbs). What began as peaceful protests over police brutality and concerns about lingering racism has given way to looting, burning, direct assaults on America's most prominent founders, and organized, violent assaults on government property and law enforcement officers.

As a chronicle of history, the 1619 project is a failure; prominent historians quickly objected to its many errors, forcing a “muted, microscopic correction” from the Times. But as a propaganda campaign, the 1619 Project has found far more success than it deserved, largely because the mainstream media is willing to promote any argument, however bankrupt, which might damage their number-one enemy, President Donald Trump. The president has already instructed the Department of Education to investigate how the 1619 Project has infiltrated America's public schools. Now, President Trump has determined to root out the 1619's Marxist propaganda from the federal bureaucracy. The White House memo rightly condemned the “wokeness” trainings for opposing “the fundamental beliefs for which our Nation has stood since its inception.”

The White House memo also disparaged the “division and resentment” engendered by critical race theory. Instead of celebrating the diversity of race, ethnicity, and religion in America, the doctrine seeks to paint some as evil oppressors and others as innocent oppressed.

Americans face a critical juncture in the 2020 election. Openly Marxist forces in our schools, our media, our government, and our streets, threaten to destroy the liberties we prize. While most career politicians apologize and flip-flop at the first sign of conflict, President Trump is one of only a few public leaders who has demonstrated the courage to stand up to them.