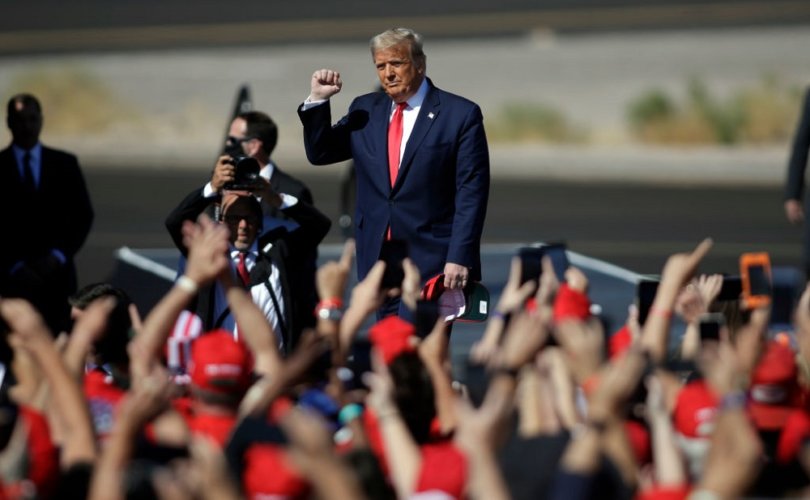 October 28, 2020 (American Thinker) — Thanks to President Trump's latest executive order, there's got to be a sense of panic across every administrative agency in Washington. Last week, President Trump issued an order bearing the innocuous title “Executive Order on Creating Schedule F In The Excepted Service.” Behind that title lurks an earthquake that may finally break the permanent bureaucracy's stranglehold on federal politics and bring more accountability to the American government.

When the Founders ratified the Constitution, they envisioned only three branches of government: the Executive, the Legislative, and the Judicial Branches. However, as America grew, a bureaucratic class grew along with it.

In fact, those theories are, as Biden would say, malarkey. Over the past four years, we've learned that agency employees believe themselves to be an unaccountable fourth branch of government. We've also seen that too many employees are highly partisan. Whether in the IRS, the FBI, the DOJ, the CIA, or multiple other agencies, they see their highest goal as advancing the Democrat party's interests. This is not surprising, given that, in 2016, 95% of those federal employees who made political donations gave their money to Hillary Clinton.

There's yet another problem with the federal bureaucracy: it acts as an unelected legislature. Congress has repeatedly ceded to administrative agencies the power to dictate how businesses and individuals can function in America. While Congress is answerable to voters (senators must go back to their constituents every six years and House members must go back every two years), the administrative agencies aren't answerable to anybody.

These unfettered administrative agencies, collectively, are the swamp. The swamp's members have attempted a coup against the White House; they have set up an internal resistance against their constitutional boss, President Trump, and they have actively harassed people who don't toe the Democrat party line, whether through the IRS, the BLM, or myriad other alphabet soup agencies.

That's why it's important that President Trump is finally acting against the policy-makers in the federal bureaucracy. His “Executive Order on Creating Schedule F in the Excepted Service” allows a presidential administration to look beyond the checkboxes of “competitive service selection procedures” to determine whether upper-level management employees in the federal service are doing a good job.

The directive, issued late Wednesday, strips long-held civil service protections from employees whose work involves policymaking, allowing them to be dismissed with little cause or recourse, much like the political appointees who come and go with each administration.

Federal scientists, attorneys, regulators, public health experts and many others in senior roles would lose rights to due process and in some cases, union representation, at agencies across the government. The White House declined to say how many jobs would be swept into a class of employees with fewer civil service rights, but civil service experts and union leaders estimated anywhere from tens of thousands to hundreds of thousands in a workforce of 2.1 million.

The same WaPo article argues that the executive order makes the bureaucracy a partisan organization rather than a pure and nonpartisan workforce:

Still, the order, coming less than two weeks before the election, represents a stunning effort to reshape large parts of the nonpartisan government, which is supposed to serve as a cadre of subject-matter experts for every administration.

That's a laugh. There's nothing nonpartisan about the swamp. Trump's order finally gives the president — who is, after all, the boss — the power to get rid of employees who actively resist a president's policies. This power matters because the American people have selected their president because of his policies. Those employees who “resist” implementing his policies should be fired.

But here's the deal about this executive order: if Trump is re-elected, the order will eventually go into effect, and Trump will finally be given a free hand to clean out the swamp, getting rid of partisan actors, and keeping in place employees who are dedicated to working for the American people. However, if Biden is elected, he will immediately rescind this executive order. You can then expect the swamp to grow even more powerful in an administration that has as its primary goal expanding the government into every area of American life.