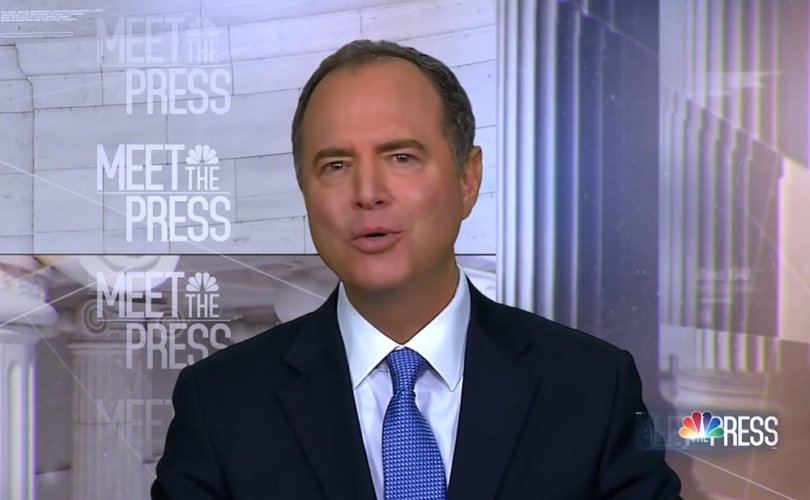 It is doubtful that very many people watched hours and hours of the impeachment proceedings in the Senate last Tuesday. A little bit went a long way. But this much was abundantly clear: Adam Schiff is maniacally obsessed with removing President Trump from office. We have known for years that he is a pathological liar; he lies even when he surely knows his lies will be exposed in due time.

Rep. Schiff promised for at least two years that he had absolute proof that Trump had colluded with Russia. He did not. The Mueller Report put that claim to rest.

Schiff made up the phony transcript of the president's phone call to President Zelensky of Ukraine even after the actual transcript had been released. He was so driven that he read his little screenplay in public, in an official hearing! How dumb is that? It is worse than dumb; it is pathological.

Schiff appears to have some serious mental problems. Watching him, even in small doses, throughout the first day of the “trial” in yet another of the Democrats' sure-to-fail attempts to see President Trump removed from office, one cannot help but realize we are watching a disturbed man melt down before our eyes. He is shockingly arrogant, thoroughly disdainful of the president, Republicans, and the American people.

Schiff is willing to fabricate and twist the tale he tells even though there is no evidence for all of his wild accusations. He's already been caught misrepresenting the evidence, as Melanie Zanona of Politico reports:

House Intelligence Chairman Adam Schiff appears to have mischaracterized a text message exchange between two players in the Ukraine saga, according to documents obtained by POLITICO — a possible error the GOP will likely criticize as another example of the Democrats' rushed effort to impeach President Donald Trump.

The issue arose when Schiff (D-Calif.) sent a letter to House Judiciary Chairman Jerry Nadler (D-N.Y.) last week summarizing a trove of evidence from Lev Parnas, an indicted former associate of Trump's personal attorney Rudy Giuliani. In one section of the letter, Schiff claims that Parnas “continued to try to arrange a meeting with President Zelensky,” citing a specific text message exchange where Parnas tells Giuliani: “trying to get us mr Z.” The remainder of the exchange — which was attached to Schiff's letter — was redacted.

But an unredacted version of the exchange shows that several days later, Parnas sent Giuliani a word document that appears to show notes from an interview with Mykola Zlochevsky, the founder of Burisma, followed by a text message to Giuliani that states: “mr Z answers my brother.” That suggests Parnas was referring to Zlochevsky not Zelensky.

The charitable explanation for this is sloppiness. But Schiff has deliberately lied before, so charity may not be in order.

He surely cannot think President Trump will be convicted in the Senate, so he must have his eyes on defeating Trump at the polls in November. Not much chance of that, given the quality of the opposition candidates and the phenomenal success of President Trump's three years in office. America, as Trump rightly asserted in Davos, has not been so economically successful in decades. He encouraged his fellow CEOs from around the world to follow his lead, to unleash their own populations with freer markets, fewer regulations, etc. He was the star of that show.

Adam Schiff has made himself the face of impeachment, and he is obviously very proud of his role in this Democrat disaster. He just seems not to know how big a disaster it is, for him and his party. Sure, the talking heads at CNN and MSNBC think Schiff is some kind of hero. How they miss his deranged visage and manner is a mystery because it is likely that most Americans who saw any of his frenzied attacks on the president on Tuesday were not only put off, but horrified. The man is not well.

By midnight, Schiff seemed close to actually melting down like the Wicked Witch of the West in The Wizard of Oz — close to tears, as in his final act at the oh, so illegitimate “inquiry.” Schiff is the biggest mistake Pelosi ever made, for he has made fools of her and all those who are too cowardly to rein him in, to admit that the emperor has no clothes. They may grit their teeth and utter his praise, but they all know he is a menace to their society.

“An outside show is a poor substitute for inner worth” (Aesop again). Schiff is all show, an empty vessel. He will be his party's undoing. Adam Schiff's unrestrained zeal to overturn the 2016 election and affect the 2020 vote betrays his wholesale lack of discretion. And Trump, despite all the Democrats' efforts to unseat him, will be re-elected in a landslide in 2020.