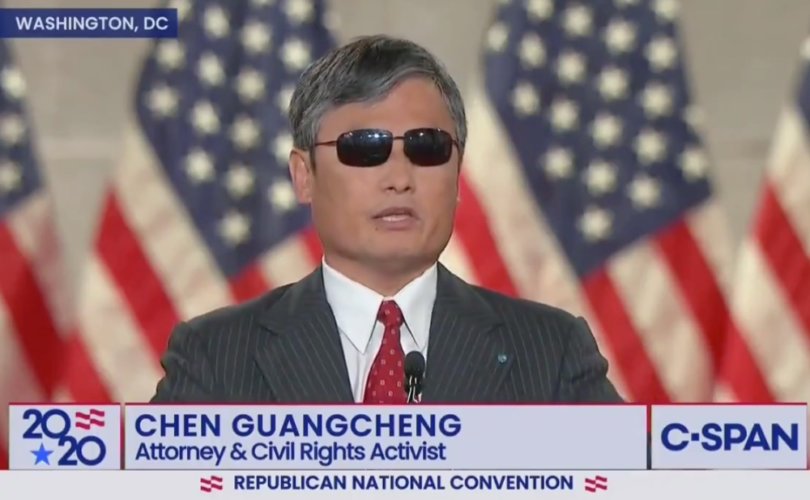 August 27, 2020 (LifeSiteNews) – “The CCP is an enemy of humanity. It is terrorizing its own people, and it is threatening the well-being of the world.” – Chen Guangcheng at the RNC

True to character, activist Chen Guangcheng did not pull any punches in his speech at the Republican National Convention. (Read the full transcript here.) When he exposed the widespread use of forced abortion and sterilization in Linyi, China, he was jailed and tortured for years. The Chinese Communist Party (CCP) failed to break his spirit, and he continues his valiant activism from, in his words, “the United States, where we are now free.”

Having Chen speak at the Convention was a bold move. It sent a clear message that the United States will no longer kowtow to Beijing and practice appeasement diplomacy. The current administration has taken strong action for human rights in China, including standing with the people of Hong Kong and the Uyghur Muslims, who are current victims of the CCP’s forced abortion and sterilization policy. The Convention has given an important national platform to Chen – the world’s most heroic opponent of forced abortion under the One Child Policy in China.

Seeing Chen speak at the Convention was a profound experience for me personally, since I spent years traveling the world to raise the visibility of his case while he was in prison. You can watch our “Free Chen Guangcheng” video below.

We translated and released his searing report of forced abortions and presented it at a Congressional hearing. We worked with Chinese activists to create an international Sunglasses Campaign to press for his release. The day before it became public that he had escaped house arrest, I was advocating on his behalf at the Dail (Irish legislature). A group of activists protested on his behalf in front of the Chinese Embassy in Dublin.

The day Chen arrived safely in the United States was one of the most thrilling days of my life.  Meeting him and his wife for the first time was unforgettable. To see him now, addressing the nation and indeed the world in such a powerful way is almost surreal. Congratulating him warmly over the phone last night, I reflected how I had once said, “I would have crawled halfway around the world to see him while he was under house arrest.”

May Chen’s message ring loud and clear. The United States must continue to challenge, not appease, China on its human rights record. Freedom in China – and indeed in the world – depends on it.

Reggie Littlejohn is the president of Women’s Rights Without Frontiers.