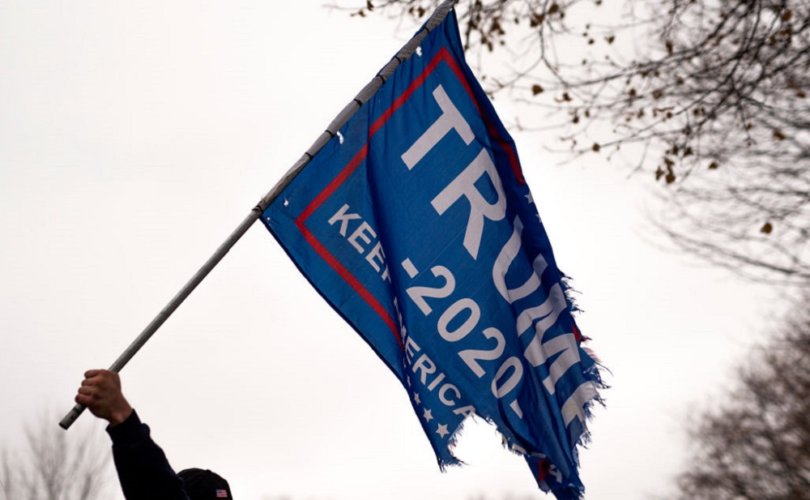 November 17, 2020 (American Thinker) — President Donald Trump left the glamorous world of celebrity, fame, and fortune in June 2015 on a mission, not for himself, but for the American people.

He knew that the path ahead would be lonely.  Before his famous escalator ride at Trump Tower in 2015 to announce his candidacy, he prophetically warned his son Don Jr.:

The day of the announcement my father told me something that I would remember, again and again in the coming weeks and months. It would be one of the most accurate observations I would hear since my own immersion into politics. We got on the elevator and he turned to look at me and he said, “Now we find out who our real friends are.”

Trump has few real friends these days within the Washington, D.C. ruling class, aside from his inner circle.  After as corrupt an election as one can imagine, many of his so-called friends are eager to stick a shiv in his ribs rather than defend him against a coup that makes Spygate looks like child's play.

Trump led in the crucial swing states on Election Night to a degree that if it were any other candidate or election, the media would have called it before midnight.  Instead, the voting stopped at midnight, and votes were either fabricated for Joe Biden or magically switched from the Trump to Biden column, in only the states and in only the amounts to put Biden over the top so the DNC media could declare Biden the winner.

How convenient that just before Trump hit the magic number of 270, Fox News called Arizona for Biden, with other states on cue, stopping their vote counts, allowing the vote-rigging to begin, avoiding having to declare Trump the winner.  It almost seems like a coordinated plan.  Was it?

We are learning more by the day about corrupt voting machines and software, and a scheme, as Trump attorney Sidney Powell describes, “organized and conducted with the help of Silicon Valley people, the Big Tech companies, the social media and even the media companies.”

It was less than a year ago that Senators Elizabeth Warren, Amy Klobuchar, and Ron Wyden were concerned about these voting machines, yet today this is all “conspiracy theory.”  Was there foreign interference in the election via corrupted voting machines?  Were U.S. votes routed through servers in Spain and Germany?  Election interference was of great interest to congressional Democrats during Trump's first term, yet they seem to have no interest in such interference today.

Where are the Republicans?  Where are so-called conservatives?  Where is the outrage?  Where are Trump's friends?  Does he have any these days?

How ironic that George W. Bush was quick to congratulate “president-elect” Joe Biden.  Bush barely “won” his election in 2000, while his opponent Al Gore fought for 37 days before the U.S. Supreme Court forced his concession.  Bush felt it reasonable to fight dimpled and hanging chads in one single state, yet he scoffs at Trump fighting multi-state fraud?

Failed former Republican primary candidate Chris Christie suggests that it may soon be time for Trump to “move on.”  What a show of support.  No wonder his candidacy failed.

Another loser, Mitt Romney, joined the chorus.  I would not be a bit surprised if Romney had the 2012 election stolen from him in the same way as is happening to Trump today.  Yet like most establishment Republicans, Romney prefers to give a “statesman-like” concession speech rather than soil his wingtips in a street fight to claim what is legitimately his.  Interestingly, the Romney family has financial ties to voting machines.

World leaders have been quick to call and congratulate the assumed president-elect, the café-au-lait crowd happy to see the America-first president sent packing in exchange for another sap in the White House willing to pay the credit card bills of their freeloading nations.  Trump is learning who is friends are.

There are a few exceptions. Leaders from Russia, Brazil, Mexico, Slovenia, and North Korea have not offered Biden their congratulations, prudently waiting to see how this plays out.  Perhaps they know more about a recent U.S. raid on a voting machine server facility in Frankfurt, Germany that might reveal an international conspiracy to switch votes in our recent election.  Perhaps, as in the case of Mexico's leader, they know the smell of a stolen election when they see it.

Most congressional Republicans lost their voices after the election, even those fair-weather friends who happily rode Trump's coattails to election or re-election.  They see nothing suspicious or sinister in Republicans maintaining control of the Senate and gaining ten-plus seats in the House while the leader of their party supposedly lost re-election.

Members of Congress eager to investigate bogus claims of Trump colluding with Russia have no interest in probing electoral irregularity that defies statistics and common sense.  How did states where Trump drew 50,000 to his rallies and Biden could not draw 50 to his events choose the unpopular dullard to lead the country?

Trump has 89 million Twitter followers compared to 19 million for Biden.  But more people voted for Biden?

Then there is voter turnout higher than the number of registered voters, and in some areas, a slew of 120-year-old voters in some cities.

Where have Trump's friends been on Spygate?  This was a fraudulent and illegal attempt to disrupt an election, transition, and presidency, and to date, there has been only a single plea deal for some mid-level no-name while the ringleaders are writing books and securing lucrative cable news gigs.  The GOP establishment wants to “move on” from this scandal as well.

NeverTrumps, once apparently conservative Republicans, have made themselves irrelevant by becoming liberal Democrats.  Fox News, once a “fair and balanced” alternative to the left-wing drumbeat of the remaining big media, is following the NeverTrump path into irrelevancy.

Trump thought he had friends at Fox News, giving frequent interviews and shout-outs, only to have them stick the first Election Night shiv between his ribs.  Who will watch Fox now, as they are not at all different from any of the other far-left news outlets?

Trump may appear alone, but 70-plus million Americans supported and voted for him.  This group isn't going away.  They watch television, shop, travel, vote, and otherwise control much commerce in America.  They will observe who Trump's friends are and who are not.  He may appear lonely, but he has 70 million close friends out there.

No one knows how this show will play out.  Will it be a biblical takedown of the Deep State, or has Trump finally met his match?  Although he appears alone, he has the thoughts and prayers of millions of Americans as the wind beneath his wings.  As Margaret Thatcher told former President George H.W. Bush, now is not the time for Trump's friends to go wobbly.

Brian C. Joondeph, M.D. is a Denver-based physician and freelance writer for American Thinker, Rasmussen Reports, and other publications.  Follow him on Facebook,  LinkedIn, Twitter, Parler, and QuodVerum.