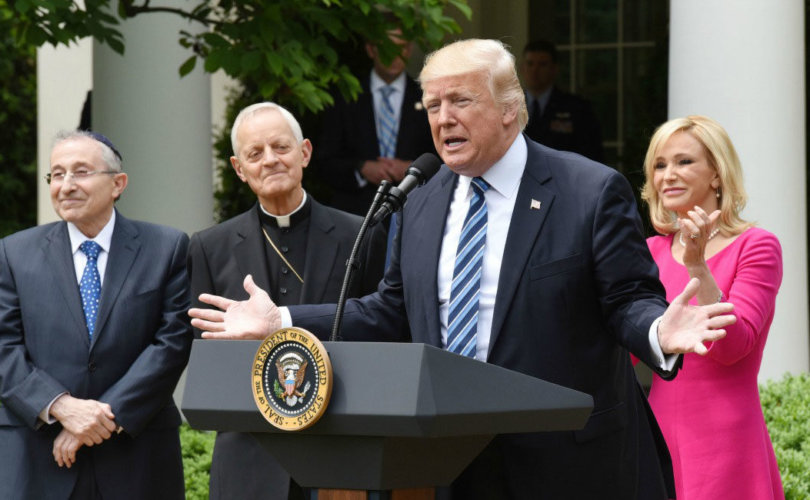 May 4, 2017 (The Daily Signal) — President Donald Trump said he’d promote commonsense policies that would “Make America Great Again” and would stand up to politically correct bullying from the left.

So why isn’t he doing that in the case of religious freedom?

Twice now, he has failed to stand up for commonsense policy on religious liberty when liberal opponents lashed out against it.

Back in February, he caved to the protests of liberal special interest groups as he declined to issue an executive order on religious liberty that had been leaked to hostile press.

Today’s executive order is woefully inadequate. Trump campaigned promising Americans that he would protect their religious liberty rights and correct the violations that took place during the previous administration.

Trump’s election was about correcting problems of the last administration, including religious liberty violations and the hostility to people of faith in the United States. This order does not do that. It is a mere shadow of the original draft leaked in February.

As I explain in my new book from Oxford University Press, “Debating Religious Liberty and Discrimination,” religious liberty is a birthright of all Americans. And yet over recent years, Americans saw their religious liberty rights under assault as never before.

The Trump administration still has time to take meaningful action to reverse those trends, so that all Americans may seek out and serve God and their neighbors according to their own convictions, not the government’s.

All Americans will benefit from the protections that Trump could issue. Congress should also act to make these protections permanent, so a future administration cannot easily undo them.

All Americans should remain free to worship God, serve the poor, educate the next generation, and run a business, all in accordance with their religious beliefs—whatever those religious beliefs happen to be. We should all be subject to the same legal standard: Government can only substantially burden the free exercise of religion if it is acting to advance a compelling government interest pursued in the least restrictive way possible.

Media reports from Tuesday said that today’s executive order was going to provide meaningful protections: “one influential conservative who saw the text said it hasn’t been dialed back much—if at all—since the February leak. ‘The language is very, very strong,’ the source said.”

In reality, what Trump issued today is rather weak. All it includes is general language about the importance of religious liberty, saying the executive branch “will honor and enforce” existing laws and instructing the Department of Justice to “issue guidance” on existing law; directives to the Department of the Treasury to be lenient in the enforcement of the Johnson Amendment; and directives to the secretaries of the Treasury, Labor, and Health and Human Services (HHS) to “consider issuing amended regulations” to “address conscience-based objections” to the HHS contraception mandate.

But the federal government should be honoring and enforcing our religious liberty laws anyway, legislation is required to actually address the Johnson Amendment—which isn’t the prime priority on religious liberty—and the Supreme Court has already unanimously instructed the federal government to resolve the case of Little Sisters of the Poor and other HHS mandate cases.

By contrast, the February draft—a version of which was originally planned for today according to media reports—made good on many of the president’s promises to protect religious liberty from government penalties.

That draft protected the religious liberty rights of all Americans in very tailored ways that addressed the problems of today.

The earlier version ensured that the government would not discriminate against beliefs that are under assault, and protected religious organizations’ right to maintain their mission and identity in their staffing decisions and programming, while not losing the ability to partner with the government.

The previous draft of the executive order also provided specific protections to undo some of the worst of liberal overreach.

It would have finally and fully protected Americans from having to violate their consciences under the Obamacare abortifacient and contraception mandate. It would have protected the ability of all Americans to buy health care that doesn’t cover or subsidize abortion.

And it would have protected all Americans who believe that marriage is the union of husband and wife from federal government penalties or coercion.

These protections would take nothing away from anyone. They simply would ensure that the public square remains open to all religious voices, even when those voices diverge from the government’s view on contested questions. They would protect diversity, pluralism, and tolerance.

None of this should be objectionable—which makes you wonder why liberals objected, except to continue the denunciation of “deplorables” that offended Americans of good will last year.

There is still time for Trump to make good on his promises. He can still issue an executive order based on that February draft, and then Congress can act to make those provisions permanent.

Trump promised while on the campaign trail that he would robustly defend religious freedom from pressing threats. Today, he didn’t make good on that promise. But he still can, and should.