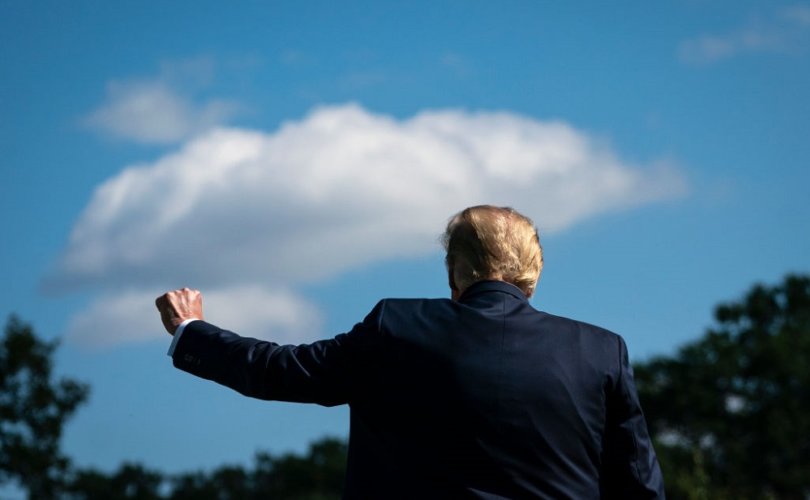 January 30, 2020 (American Thinker) — Much has been spoken and written lately regarding the evangelical community's feelings toward President Trump, especially since the Christianity Today editorial calling for his removal from office was published last month. Many evangelicals continue to support him wholeheartedly because he has proven repeatedly that he can be trusted to keep his campaign promises and to govern faithfully and conservatively. Others vow never to support him because they feel that he “embodies the anti-Christian ethic.”

President Trump certainly has a “colorful” past, and that is the key reason why I did not support him in the Republican presidential primary of 2016. I just couldn't imagine a man of his moral failings representing this nation and becoming the leader of the free world. However, when it ultimately came down to a choice between Donald Trump and Hillary Clinton on November 8, it was a no-brainer. I would have crawled on my hands and knees to the polls, if necessary, to vote against her. That's exactly what my vote was at that time — a vote against Hillary Clinton.

It turns out, however, that millions of us who held our noses and voted for Trump have been quite pleasantly surprised by his ardent support of the values and policies that we hold dear. He has been the most pro-life president in the history of our nation, and he was the first president ever to attend the annual March for Life on Capitol Hill. He has been a true friend to small business–owners; he has appointed hundreds of wonderful federal judges; he is defending religious liberty; he is improving our international trade relationships; and among many other accomplishments, he is making our military stronger and our nation safer. Despite all of these successes, many persist in demanding the removal of President Trump because they dislike how he conducts himself.

For many evangelicals, the decision to vote for and to continue to support Donald Trump essentially boils down to this: he operates from the Republican Party platform, which represents life; liberty; and conservative, Judeo-Christian values. Whoever his Democrat opponent turns out to be in November, that person will stand on the Democrat Party platform, which is immoral, anti-Christian, anti-God, anti-life, and anti-freedom. Seems pretty clear and simple.

My church went through a study in 2019 called OT19, in which we read much of the Old Testament together. The very same week that the Christianity Today editorial calling for Trump's removal was published, our assigned reading included Isaiah, chapters 44 and 45. In these chapters, the Israelites were captives in Babylon, and God used a non-Israelite, a Persian king named Cyrus, to free His people from captivity and rebuild the temple in Jerusalem.

For the sake of Jacob my servant, of Israel my chosen, I summon you by name and bestow on you a title of honor, though you do not acknowledge me. I am the Lord, and there is no other; apart from me there is no God. I will strengthen you, though you have not acknowledged me, so that from the rising of the sun to the place of its setting men may know that there is none besides me. (Isaiah 45:4–5)

I see some parallels between God's anointing of the Persian King Cyrus and the election of President Donald Trump. Cyrus clearly was not a follower of God, but God anointed him and gave him a “title of honor.” Donald Trump has not historically been a follower of God, either, yet God has also bestowed on him a title of honor and given him the role of shepherding the most influential and powerful nation in the history of the world.

There has been much debate about whether President Trump is truly a Christian and whether he is “morally fit” to lead our nation. He certainly has moral shortcomings, as we all have. It is true that only God can judge the hearts of men, but hundreds of trusted evangelical leaders all over the nation, who have spent time with President Trump and advised him and prayed over him, continue to defend and support him. Regardless of Trump's true spiritual condition, which none of us can know with certainty, God has shown clearly in His Word that He can and will use both people who honor and serve Him and people who do not in order to accomplish His purposes on this Earth. When God anointed the foreign, heathen Persian King Cyrus, He said about him, “He is my shepherd and will accomplish all that I please” (Isaiah 44:28).

Cyrus was the tool that God used to bring deliverance and restoration to the Jews thousands of years ago. God has continued to use all sorts of flawed and morally deficient people — Moses, Samson, Rahab, and Paul are just a few examples — down through the centuries, because He is God and He knows best.

God doesn't need our permission or approval to put His choice of shepherd over us to accomplish His purposes. His ways are higher than our ways, and we can't always understand with our finite minds what He is doing in this world. However, we can see when good and moral fruit is coming from the White House, as it certainly seems to be now. I, for one, am abundantly thankful for the shepherd who has been anointed to watch over our nation. Our responsibility is to continue to pray for our president to make wise decisions. He has the weight of the world on his shoulders, and we, like Aaron and Hur, should help to hold up his hands when he grows weary (Exodus 17:10–13).

Michelle Thomas is a Christ follower, wife to Trevor Thomas, and homeschooling mom of four. Her books include Lord, I Need You, Through Deep Waters, and Debt-Free Living in a Debt-Filled World. Her website is KingdomCrossing.com, and her email is [email protected].