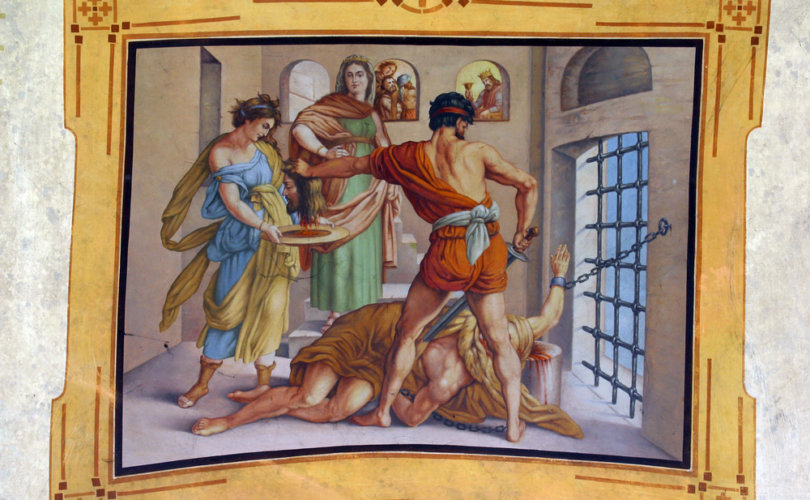 Herod was the one who had John arrested and bound in prison on account of Herodias, the wife of his brother Philip, whom he had married. John had said to Herod, ‘It is not lawful for you to have your brother’s wife.’ Herodias harbored a grudge against him and wanted to kill him but was unable to do so (Mark 6:17-19).

Herodias’ opportunity came when Herod publicly promised her daughter Salome “anything” after she had danced for him and his guests at a dinner he hosted in his palace. Salome, on her mother’s prompting, asked for John’s head. “So he [Herod] promptly dispatched an executioner with orders to bring back his head. He went off and beheaded him in the prison. He brought in the head on a platter and gave it to the girl. The girl in turn gave it to her mother” (Mark 6: 27-28).

Scripture tells us that later “when his disciples heard about this, they came and carried his body away and laid it in a tomb” (Mark 6: 29). The head and the headless corpse were laid together in the grave as testimony to John’s fidelity to the truth.

St. Mathew tells us that when Jesus learned of the death of his cousin John, he withdrew to a deserted place by himself (Mathew 14:13). But he would preach soon enough on the same truth for which John died.

In Judea, across the Jordan, after his transfiguration on Mt. Tabor some Pharisees tested Jesus hoping that to catch him in a theological error. Was divorce permissible? He told them the truth, which they did not want to hear.

Men and women, he taught them, marry and become one unto death. “They are no longer two but one flesh. Therefore let no man separate what God has joined.” Later, among only his disciples he went even further: “Whoever divorces his wife and marries another commits adultery against her; and the woman who divorces her husband and marries another commits adultery” (Mark 10:8-9, 11-12).

John was beheaded. Jesus was crucified. Teaching the truth in this world so disordered by sin comes with a price. It is not for the lukewarm. In the centuries immediately following the death of Jesus until its birth on Pentecost the Church was in constant persecution. As Mark Riebling writes in his book Church of Spies the “faith at first survived only as a clandestine movement in Rome.”

Beginning with Peter “the first popes were martyred to a man: the emperors sent some of them to Sardinia, where each had the nerve at the back of his right knee severed, his right eye gouged out and cauterized with molten iron, and then, if under thirty, he endured castration.” Riebling quotes the Roman historian Tacitus on the persecution of Christians across the empire. “Some were nailed on crosses, others sewn up in skins of wild beasts, and exposed to the fury of the dogs, and others again, smeared over with combustible materials, were used as torches to illuminate the darkness of the night.”

The lord chancellor of England, jailed for fourteen months in the Tower of London, malnourished and weak, was brought into a courtroom and tried for treason. But he was neither spy nor insurgent.

The “treason” of Thomas More was nothing more or less than his insistence on the indissolubility of the marriage of Henry VIII to his first wife Catherine and his refusal to reject the legitimate magisterium of the Church. That is, he stood accused of insisting on precisely what Jesus taught when he answered the Pharisees and of not compromising the truth in its articulation or its practice. For this deed he was condemned to death by his Catholic king, with the concurrence of virtually the entire Catholic hierarchy of England save John Fisher.

This sentence was imposed on Thomas More on that day in that courtroom:

That he should be carried back to the Tower of London and from thence drawn on a hurdle through the City of London to Tyburn there to be hanged till he should be half dead; that then he should be cut down alive, his privy parts cut off, his belly ripped, his bowels burnt, his four quarters set up over four gates of the City, and his head upon London Bridge.

King Henry commuted More’s sentence to death by beheading, but that same sentence would be imposed on scores of Catholic priests and laity for the same “treason” in the many decades to come. Their sentences would by and large not be commuted, and they would endure the unendurable for him who is Truth.

On July 6, 1535 at Tyburn Hill More laid his head on a block of wood and the executioner’s axe was brought down hard against his neck. Thomas More was dead. His head was put on a pole on London Bridge where it stayed for many months, as much as evidence of More’s faith and courage, and the king’s sinfulness, than as the example of royal power the king intended.

What the Church taught in the 16th century was the same moral truth that Jesus taught in the first century, and the same truth for which Thomas More, John the Baptist, and the early popes and their flocks were martyred. It is the same ancient truth that must be taught and lived by all Catholics on earth in this the 21st century.

The truth of marriage is universal. There is not one truth about the indissolubility of marriage for Americans, one for Germans, one for Ugandans, and one for Indians. Nor is there one truth to be articulated, and a different one to be sanctioned in practice.

The Lord Jesus insisted on the original intention of the Creator who willed that marriage be indissoluble. He abrogates the accommodations that had slipped into the old Law [of Moses].  Between the baptized, ‘a ratified and consummated marriage cannot be dissolved by any human power or for any reason other than death’ (Catechism of the Catholic Church, para. 2382).

Divorce is a grave offense against the natural law. It claims to break the contract, to which the spouses freely consented, to live with each other till death. Divorce does injury to the covenant of salvation, of which sacramental marriage is the sign. Contracting a new union, even if it is recognized by civil law, adds to the gravity of the rupture: the remarried spouse is then in a situation of public and permanent adultery: If a husband, separated from his wife, approaches another woman, he is an adulterer because he makes that woman commit adultery, and the woman who lives with him is an adulteress, because she has drawn another’s husband to herself (CCC 2384).

Divorce is immoral also because it introduces disorder into the family and into society. This disorder brings grave harm to the deserted spouse, to children traumatized by the separation of their parents and often torn between them, and because of its contagious effect which makes it truly a plague on society (CCC 2385).

It is for this reason that the Church has taught that one who is divorced and remarried without benefit of a declaration of nullity of the earlier marriage may not receive Holy Communion. Forgiveness for serious sin is a prerequisite for reception of the Holy Eucharist. It is not a simultaneous event in Catholic teaching.

To respond to the invitation to receive Holy Communion

We must prepare ourselves for so great and so holy a moment. St. Paul urges us to examine our conscience: “Whoever, therefore, eats the bread or drinks the cup of the Lord in an unworthy manner will be guilty of profaning the body and blood of the Lord. Let a man examine himself, and so eat of the bread and drink of the cup. For anyone who eats and drinks without discerning the body eats and drinks judgment upon himself.” Anyone conscious of a grave sin must receive the sacrament of Reconciliation before coming to communion (CCC 1385).

One of the most common features in the years after Vatican II was the use of confusion and obfuscation about valid teachings of the Church to effect a change on the practical level while simultaneously denying any change in the teaching. There seemed to be at every turn some person in authority who was instructing the faithful how they must understand the sacred teachings in a new and different way, not infrequently to fit the teacher’s own manufactured version of the truth. The instruction usually came clothed in rich words of sentimental concern and compassion to mask the intended accommodation with evil and the corruption of the truth.

But the Baptist and More, Peter and the first popes, and all of the martyrs through history died rather than accept an accommodation with evil. Like their Master they did not let the cup pass, but embraced the will of the Father, even if it led to torture and death. Their example is our guide and our strength as we confront a very real coercion to acquiesce to the burning desires of the secular culture, abetted by failing religious leadership, to reduce marriage to a sterile sexual encounter that is nothing more permanent than going steady with another person (or persons, male or female, adult or child).

Before St. Stephen was stoned to death for his witness to the truth, he confronted the Jewish hierarchy and religious elites in Jerusalem. His words deserve attention:

“You stiff-necked people, uncircumcised in heart and ears, you always oppose the Holy Spirit; you are just like your ancestors. You received the law as transmitted by angels, but did not observe it” (Acts 7:51, 53).

Robert J. Gieb has practiced probate law in Ft. Worth, Texas for forty years. He is local counsel for Catholics United For Life of North Texas. Reprinted with permission from Catholic Lane with the author's permission.