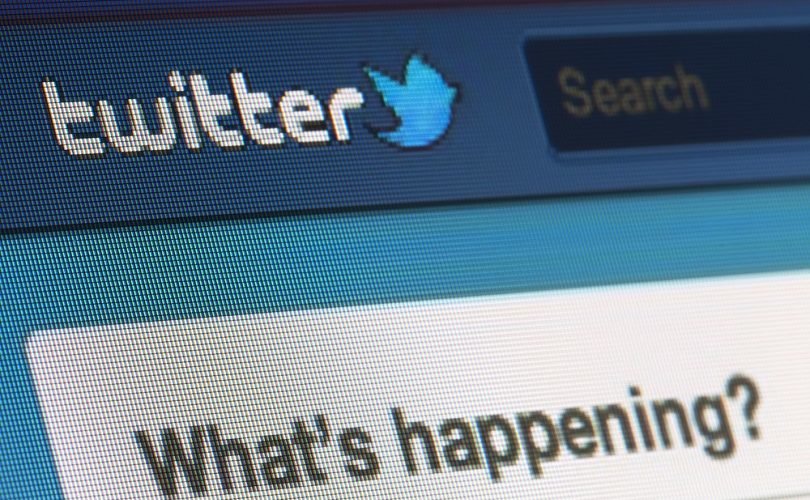 Editor's note: The following report is written by Peter LaBarbera, former reporter for LifeSiteNews and the president of Americans For Truth About Homosexuality (AFTAH.org), based outside Chicago, Illinois. He shares a letter he wrote to Twitter after being banned from the platform for posting what the social media giant deemed “hateful conduct.” WARNING: This this letter contains graphic medical descriptions of homosexual acts.

October 17, 2018 (LifeSiteNews) – I sent a version of the following letter to Twitter today appealing their decision Monday to lock me out of my account (@PeterLaBarbera) due to a 2016 tweet describing homosexual acts as a “sin” that “spreads disease” – which Twitter deemed in violation of its rules against “hateful conduct.”

Near the end of the letter, I state the following: “If Twitter no longer allows its users to advocate for healthy behaviors on its platform, and to defend their sincere moral and religious beliefs–shared by billions worldwide–then it will devolve into a bland, politically correct echo-chamber.”

“That not only would fail to serve Twitter's mission but would undermine liberty and American democracy as well.”

I would gladly remove the offending tweet (dated Aug 23, 2016) in question if I truly believed that it was “hateful,” but it is not.

The tweet apparently reacts to LGBTQ activist (@JayFranzone) who opposes any restrictions on gay men giving blood. Franzone remained celibate for one year so he could meet the FDA’s (U.S. Food and Drug Administration) restrictive policy on homosexuals giving blood, which he did in 2017.

I counseled Franzone in my tweet to abstain from homosexual sex (sodomy) for life, not out of malice but because that's what I sincerely believe people who struggle with homosexuality should do, to preserve their health, live a long life and avoid offending God.

This was just an opinion. I certainly don't hate Franzone (whom I’ve never met) and I hope he doesn't hate me.

To label this tweet hateful is inaccurate and conflates disagreement with hate. Moreover, demanding its removal directly punishes conservatives and Christians like me for voicing our ideas, which I hope Twitter would not countenance.

I have been very active on Twitter since 2009 and have attempted to play by the rules and engage in civil dialogue, even with hardened foes. I have devoted considerable time and energy to the Twitter platform. I am a committed Christian, a conservative and an advocate for historic Judeo-Christian (biblical) sexual morality. As such, I oppose homosexuality and gay (LGBTQ) activism through my group, Americans For Truth.

In doing so I routinely engage on Twitter with opponents, including hundreds of activists on the opposite side of the LGBTQ debate, like writer and activist Dan Savage (@fakedansavage). I have had many respectful dialogues and debates with Dan and other opponents. These lively Twitter exchanges are not something to be feared but rather celebrated in this, still, the freest country on earth.

Call me naive, but I think these “healthy conversations” between advocates on opposing sides should be celebrated by Twitter as well.

Twitter itself has staked out an ideological and advocacy position on the FDA gay-blood-donation issue, demanding an end to restrictions for homosexual donors, reportedly through the actions of one of its employees (see this 2015 Reuters article). Could it be that one or several Twitter employees who advocate that position went out of their way (venturing back to 2016) looking for alleged “hate” on my part where there was none–to punish me for my traditional views?

Twitter obviously strongly opposes the current FDA’s gay-blood-donation policy, and perhaps is pro-LGBTQ generally. Should it now censor those with countervailing opinions, using politicized definitions of “hate” or “safety” as its justification?

My tweet says that (homosexual) sodomy spreads disease, which it does. Even Jay Franzone's video on his website (www.JayFranzone.com) opposing FDA policies restricting gay male blood donors contains a quote by Dr. Peter Marks, director of the FDA’s Center for Biologics Evaluation and Research, who says:

Please reconsider your decision labeling my 2016 tweet “hateful” and in violation of Twitter's policy. If Twitter no longer allows its users to advocate for healthy behaviors on its platform, and to defend their sincere moral and religious beliefs–shared by billions worldwide–then it will devolve into a bland, politically correct echo-chamber. That not only would fail to serve Twitter's mission but would undermine liberty and American democracy as well.

Thank you for considering this appeal.