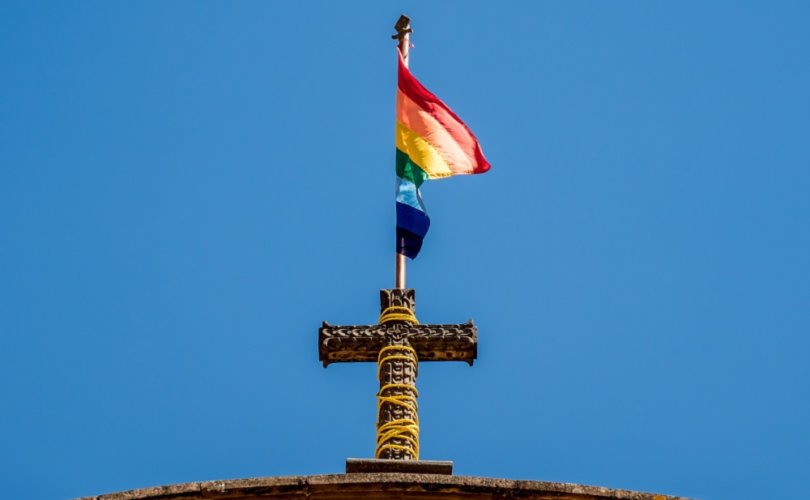 May 14, 2020 (Sons of St. Joseph) — During the height of the COVID-19 pandemic and the resulting lock-down, which caused the nationwide closing of churches and the cancellation of the Holy Mass, two separate Roman Catholic parishes, on different sides of the country, offered “queer” Stations of the Cross via social media. Most Holy Redeemer (MHR), located in the Castro District of San Francisco, and St. Paul the Apostle in New York City, both posted videos to YouTube during the Lenten season of 2020 that one parish described as: “a queer-version of The Stations of the Cross.” Both parishes have a long history of dissent and support pro-LGBT ministries.

According to the “introduction” for the Stations of the Cross from MHR:

Jesus’ journey to Calvary and death symbolizes many of the same difficulties that we face at different times in our lives; especially as people of faith and as LGBTQ people.

On the parish’s official YouTube channel are a series of videos — one for each “Station.” Normally, the Stations at MHR would take place (live) outside — around the Castro District (see image above, from MHR’s official Instagram account), stopping at various landmarks that are considered significant in LGBT history. Each Station is presented by a different parishioner from MHR; prominently featured is Mark Guevarra, a man in a same-sex relationship who formally served as a pastoral associate at a parish in the Archdiocese of Edmonton.

During Station #1 — the presenter claims that LGBT Catholics are “unjustly condemned” for “who we love.”

Station #3 takes place at the former home of LGBT-activist Harvey Milk; image above taken from this “Station.”

Station #5 takes place outside the Strut “health services” location in the Castro. Strut is a non-profit organization targeting the LGBT community; they provide information and serves which include PrEP, condoms, and lube. According to the MHR Stations: “…like Simon, people here offer their talents;” “…especially around…sexual health.”

Station #6 takes place in front of the Twin Peaks gay bar — according to the MHR Stations: Twin Peaks was one of the “first gay bars with windows, where, for the first time, LGBT people no longer hid their faces in shame.”

According to the presenter for Station #8 — “Here we salute women of our community…lesbian, bisexual, pansexual, transwomen, and gender-queer people who are devalued by both Church and society.”

MHR is overseen by a priest from the pro-LGBT religious order, The Missionaries of the Precious Blood.

The “Stations” from St. Paul the Apostle, presented by its LGBT ministry, Out at St. Paul, lacks any visual content and is an audio-only recitation of the “queer” Stations. Like MHR, the Stations are presented by various ministry members, including LGBT-activist Xorje Olivares.

Station #1 — “Let us now remember all those who, like Our Savior, have been unjustly condemned. The LGBT community often faces persecution for who we are and for who we love.“

Station #2 — “This suffering Our Savior faces calls to mind the heavy burdens LGBTQ youth carry. They fear judgment and persecution…but most heavy is the weight of accepting who they truly are and learning how to live their truth.”

Station #4 — “Coming out is a painful experience for many of our LGBT brothers and sisters. Parents and family members may not understand just as Mary and Jesus’ other family members might have had a difficult time understanding Jesus’ ministry and identities.”

Station #13 — “…the bond between Jesus and Mary is profound. We think of the bonds that unite LGBTQ families in life and in death. In spite of a world that heaps violence on LGBT people and same-sex relationships, this love persists in marriage and the bonds of family…LGBTQ love brings live…Preserve and bless LGBTQ marriages and families. Although they may face many difficulties, we know that the bond of queer love is stronger than death and overcomes all the abuse that society and the Church can conceive.”

In 2019, pro-LGBT Jesuit James Martin tweeted an image from a homoerotic series of paintings: “The Passion of Christ: A Gay Vision.” Martin has repeatedly voiced his support for the LGBT ministries at both MHR and St. Paul the Apostle.

Published with permission from the Sons of St. Joseph.