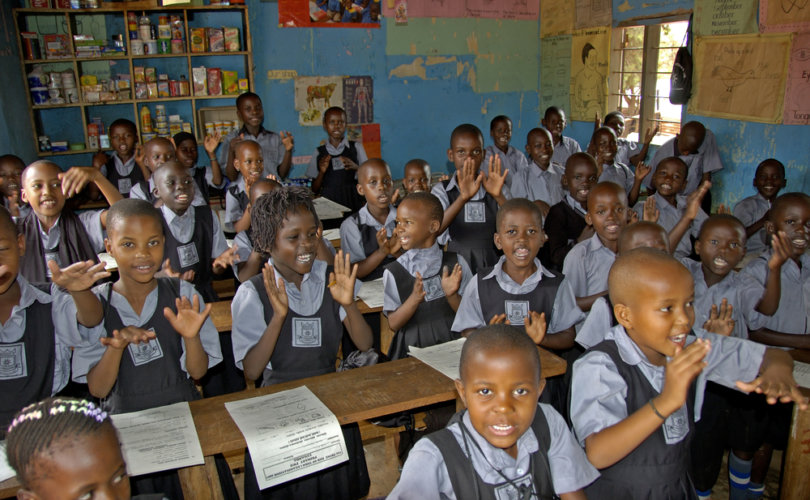 We have been sent. For us, being at the service of life is not a boast but rather a duty, born of our awareness of being “God’s own people, that we may declare the wonderful deeds of him who called us out of darkness into his marvelous light” (cf. 1 Pet 2:9). On our journey we are guided and sustained by the law of love: a love which has as its source and model the Son of God made man, who “by dying gave life to the world”. (Pope St. John Paul II, Evangelium Vitae n. 79)

September 6, 2016 (HLI) — In the midst of our battles in the defense of life and family, we are at times privileged, through grace and our efforts that conform to God’s will, to achieve significant victories. This was the recent experience of Father Jonathan Opio, Human Life International's country director in Uganda, and his team who, for over a year, confronted the radical and deceptive attempt of the promoters of the Culture of Death to unravel Uganda’s pro-life and -family laws. Because of their persistent efforts, in the face of great odds and uncertainty, they were successful in preventing a perverse and radical sex education program from becoming law, which would have had a devastating impact upon a deeply religious people who love life and family. The pro-lifers were also able to convince the Ministry of Health to temporarily halt the advance of the adoption of guidelines that would have had the effect of liberalizing abortion laws.

This well known agenda has been criticized before. Many bishops from developing countries during the Synod on the Family in 2015 were irate at foreign governments, aid organizations, and NGOs that insist upon imposing anti-life agendas as prerequisites for developmental assistance.

As for proposals to place unions between homosexual persons on the same level as marriage, there are absolutely no grounds for considering homosexual unions to be in any way similar or even remotely analogous to God’s plan for marriage and family. It is unacceptable that local Churches should be subjected to pressure in this matter and that international bodies should make financial aid to poor countries dependent on the introduction of laws to establish ‘marriage’ between persons of the same sex.

During a meeting with Polish bishops at World Youth Day, Pope Francis made a frank statement about ideologies that profess children can “choose their gender” constitute the very “annihilation of man as image of God.”

In Europe, America, Latin America, Africa, and in some countries of Asia, there are genuine forms of ideological colonization taking place. And one of these – I will call it clearly by its name – is the ideology of “gender”. Today children – children! – are taught in school that everyone can choose his or her sex. Why are they teaching this? Because the books are provided by the persons and institutions that give you money. These forms of ideological colonization are also supported by influential countries. And this terrible!

In Amoris Laetitia the Holy Father speaks of the challenges confronting the family. Particularly, he references the pressure governments and legislative bodies will inevitably use to impose their radical and perverse agendas upon families, especially upon children:

Yet another challenge is posed by the various forms of an ideology of gender that denies the difference and reciprocity in nature of a man and a woman and envisages a society without sexual differences, thereby eliminating the anthropological basis of the family. This ideology leads to educational programs and legislative enactments that promote a personal identity and emotional intimacy radically separated from the biological difference between male and female… We are creatures, and not omnipotent. Creation is prior to us and must be received as a gift. At the same time, we are called to protect our humanity, and this means, in the first place, accepting it and respecting it as it was created. ( n. 56)

The Catholic Church in Uganda played a vital role in the recent battle. In a document entitled The Concern and Position of the Catholic Bishops of Uganda on “Comprehensive Sexuality and Education (CSE) in Schools, the bishops show that they will not accept or comply with a program determined to undermine the God-given dignity of the human person and proper understanding of human sexuality. Meticulously and methodically they expose the agenda and some of the key people who have influenced current trends, like Margaret Sanger, founder of International Planned Parenthood; Alfred C. Kinsey; Allan Guttmacher; Hugh Hefner of the Playboy Foundation; and Dr. Mary Calderone, founder of Sexuality Information and Education Council of the US (SIECUS).

Determined to defend their families from the radical anti-life and family agendas, the bishops make their case poignantly clear in their conclusion:

Comprehensive Sexuality Education has a greater focus on sex liberalism and encourages sexual aberrations on children and young adults at the expense of the integral growth and health of children, the protection of children from sexual and indecent attacks, at the expense of our Culture, and Religious values, including the authentic Human rights. We are a God fearing country as reflected in our Country’s motto “For God and My Country”; we are a people with values both cultural and religious. Those values should not be eroded through the ministry of education, or any other ministry.

The Catechism of the Catholic Church teaches that men and women are called to embrace their sexual identities and that the family instituted by God, based on the marriage between one man and one woman in an indissoluble, exclusive, and fruitful union is essential for children’s development:

Everyone, man and woman, should acknowledge and accept his sexual identity. Physical, moral, and spiritual difference and complementarity are oriented toward the goods of marriage and the flourishing of family life. The harmony of the couple and of society depends in part on the way in which the complementarity, needs, and mutual support between the sexes are lived out. (n. 2333)

The Catholic Church upholds the dignity of the human person and the virtue of chastity. She is not opposed to sexual education. She counsels parents in their duty as primary educators of their children to discuss the proper role and purpose of sex with their children in an appropriate, supportive, and respectful manner, in adherence to Church teaching. The Church defends the parental obligation and duty to guide children in these crucial matters, building moral character and forming conscience. This discussion is not to be forced upon families by groups or governments who are trying to promote a radical sexual agenda and force population control – “ideological colonization” – upon a nation and its people. Social science data continually reveals that the safest and sanest time for a person to engage in sexual activity is within a lifetime and faithful marriage that is open to the gift of life. It is, after all, about love and the complete gift of oneself to another, and not just about the mechanics and feelings of sex, which is what Western NGOs have been trying to force on African families for decades.

We have won two very important victories in Uganda, and we are most grateful to the bishops, Father Opio and his team, and government leaders who fought courageously to defend the God-given rights and dignity of families. Though there is joy in this accomplishment, we cannot let our guard down, presuming the enemy is defeated. Promoters of anti-life and -family agendas will not simply abandon their goals. We must learn from our experiences – victories and defeats – and continue to collaborate with others in this ongoing fight.