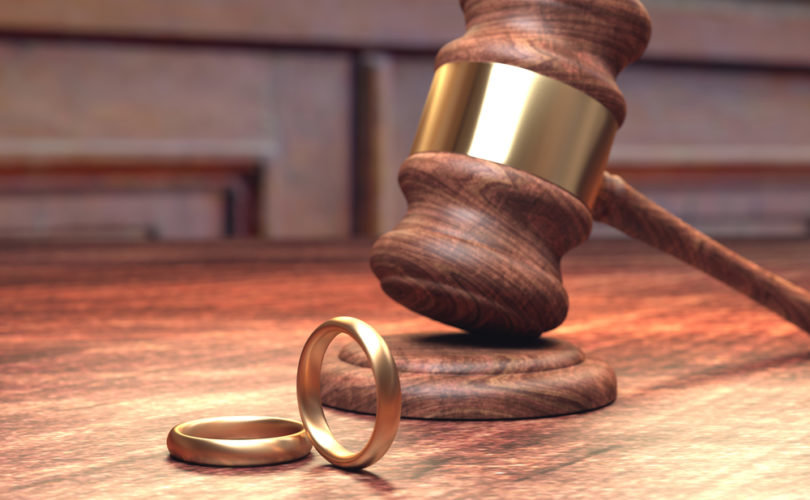 January 12, 2016 (LifeSiteNews) – When Catholic cardinals propose that those in second unions should be able to receive Holy Communion, the Church appears to be proposing that two wrongs make a right.  We hear about giving Communion to people that are objectively living in adultery (which is wrong), but we are not hearing about the Church’s involvement in the first wrong which occurred when the first marriage broke up.

Marriages break up when one our both spouses decide to separate, for any number of reasons. Church tradition shows that Catholics are not to hand over their marital disputes, outright, to the civil courts. But on November 4, a cardinal at the Vatican’s canon law council provided a new and different spin on the interpretation of the Code of Canon Law, that appears to have gone unnoticed.

Francesco Cardinal Coccopalmerio, president of the Pontifical Council of Legislative Texts, virtually eliminated the universal canonical restraint on a spouse’s freedom to abandon marriage and file for divorce. He did so with a Riposte Particolori which was his particular response to a question from an unnamed bishop asking about canon law. The bishop asked whether a Catholic is required to get the bishop’s permission before filing for civil divorce. Cardinal Coccopalmerio’s particular response has less authority than an Interpretandis (interpretation) which must be confirmed by the Pope.

During the first bishops’ Synod on the Family, Crux reporter John Allen Jr. quoted Cardinal Coccopalmerio in October 2014 showing that the cardinal favored giving Holy Communion to some divorced and remarried Catholics. Allen wrote that Cardinal Coccopalmerio, “offered the example of a woman who married a man outside the Church whose first wife walked out on him, leaving him to care for three children. ‘She cannot abandon that union or those children,’ Coccopalmerio said. ‘In these cases, we have to do something.’”

As director of Mary’s Advocates, the non-profit organization upholding marriage, I have been publicizing the canon law about separation of spouses and divorce. For years, our educational materials have highlighted that canon law requires a Catholic to have the bishop’s permission before filing for civil divorce.   When I saw Cardinal Coccopalmerio’s response, I wrote him asking him to reconsider and posted my letter on our website. A sample letter for others to send is included on the last page of the website. For his convenience, I attached an 18-page appendix showing the records of the consulters who drafted the procedural canons on separation of spouse.

I am asking him to reconsider his response wherein he stated, “In practice, this means that where there is no particular legislation or concordat to direct otherwise, and where the ecclesiastical decision has no civil effects (cf. c. 1692 §2 CIC), the local bishop's permission would not be an obligation whether juridical or moral.”

Cardinal Coccopalmerio seems to be saying this:

But others sources (see below) have suggested something quite different:

Unless there is a provision (for example, USCCB law stating the bishop’s permission is not required), then a Catholic is required to get permission.

Of importance to the Church is whether an ecclesiastic decision about separation of spouses (including any arrangements for mutual financial help and parenting) could have an effect in the civil forum. The mere fact that one forum has no arranged acceptance of the Church’s teaching and law, seems a ridiculous basis for granting permission for all Catholics to go to the said forum for instruction and implementation of said forum’s plan. For example, consider Planned Parenthood’s abortion practices. The Church’s canon law regarding abortion has no effect on the advice given by Planned Parenthood. If the Church were to give permission for a Catholic to approach Planned Parenthood for that reason alone, the Church would tacitly be condoning abortion.

An obvious problem in delegating marital disputes to the civil courts is the fact that the western no-fault divorce courts see no obligation for couples to maintain an intact home. No-fault divorce courts see no obligation for the one causing a marital break up to uphold his full obligation to support the marital home.  Moreover, the courts have no interest in protecting children from scandal given when a parent is practicing gravely sinful behavior.

Plenty of fair-minded men would only agree to start raising children with a wife who promised to cooperate with him in raising those children in an intact home, and promised to stay with him through old age “till death do us part.” These men, rightly sense that an injustice occurs when a woman withdraws from marriage, even though her husband has done nothing grave, like dangerously abusing her, or committing adultery.  The canon law restricting a Catholic from filing for divorce without the bishop’s permission could be instrumental in protecting these men from unjust divorce decrees sought by their Catholic wives.  Implementing the canon law could help a disgruntled wife choose to work with those experienced helping couples, rather than paying divorce lawyers.

In 1984, the Vatican’s Publishing House published, “The Cases of Separation of Spouses according to the New Code,” in which they said that “if the service of assistance [for those who find themselves in conflictive matrimonial situations] does not exist, it must be created.”

This interpretation of canon 1692 §2 publicized by Mary’s Advocates, requiring the bishop’s permission before filing for civil divorce, is found in other source. Some of these were included in my plea to Cardinal Coccopalmerio.

Bai Macfarlane is director of Mary’s Advocates, an organization dedicated to strengthening marriage, eliminating forced no-fault divorce, and supporting those who have been unjustly abandoned by their spouse.