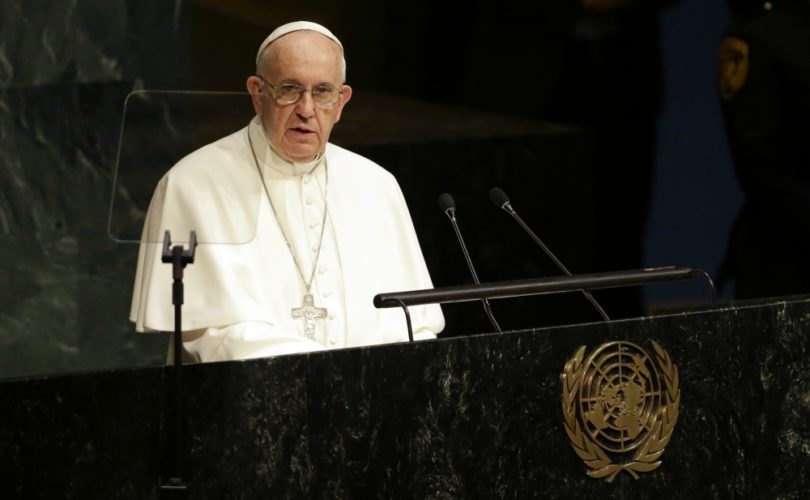 September 28, 2015 (LifeSiteNews) — Last night saw the conclusion of Pope Francis' historic visit to three leading U.S. cities.  We saw media adulation and adoring crowds everywhere. But many of us, trying to see the big picture, are wondering about his overall message, as indicated by the relative priority he gave to various current issues. The general tone and spirit of the Holy Father's trip was well captured by a cartoon that has been doing the rounds: a downcast Obama, in the Confessional with Francis, says, “I'm the most pro-abortion President ever”; and the Pope responds through the screen, “But what's your position on climate change?”

I watched the Holy Father's speech to Congress live, on television, and recall the disappointment I felt when, after making a minimal and indirect reference to abortion (affirming the need “to respect human life at every state of its development” – which would not bother “pro-choicers” much, since they claim human life begins at birth), he developed this “pro-life” theme by denouncing very explicitly not the killing of the totally innocent – often excruciatingly painful, as we now know – but only that of the atrociously guilty, via capital punishment.

In this Thursday address to America’s leading lawmakers and Supreme Court justices, Francis was equally minimal in his fleeting and merely implicit reference to same-sex “marriage.” Yesterday, speaking to the U.S. bishops, he again touched oh-so-delicately on this theme – still without uttering any such controversial words as “same-sex” or “homosexual”.

Indeed, even when speaking here to his own constituency – his fellow Successors of the Apostles – the Pope couldn’t bring himself to criticize the U.S. Supreme Court’s deplorable 5-4 decision of June 26th! All the Holy Father did was offer some very bland remarks of a more or less sociological nature. The Church, he said, cannot “disregard” the “unprecedented” social, cultural and juridical “changes” that are now having their “effects” (he doesn’t say bad effects) on “family bonds.” He added that since we Christians are not “immune” to social change, well, . . . we’ll just have to get used to this situation in which the sacramental and civil understandings of marriage are no longer as similar as they used to be. The only actual criticism the Pope voiced in this context was directed (yet again!) at social conservatives, not at the rising tide of homophile subversion, militancy and anti-Christian intolerance. Don't focus on “the problems of the world around us” and “the merits of Christianity,” said Francis to our bishops. For it is “dangerously unbalanced,” and even gets us “stuck in a vicious circle,” if we “do little” on the one hand, but “incessantly explain” our Christian teachings on the other. (This raises the question of how the Church will evangelize the world – one of the Holy Father's major priorities – without emphasizing “the merits of Christianity.”) The following two paragraphs are excerpted from the printed English text of the Pope's speech, with quotation marks as in the original:

Without the family, not even the Church would exist. Nor could she be what she is called to be, namely “a sign and instrument of communion with God and of the unity of the entire human race” (Lumen Gentium, 1). Needless to say, our understanding, shaped by the interplay of ecclesial faith and the conjugal experience of sacramental grace, must not lead us to disregard the unprecedented changes taking place in contemporary society, with their social, cultural – and now juridical – effects on family bonds. These changes affect all of us, believers and non-believers alike. Christians are not “immune” to the changes of their times. This concrete world, with all its many problems and possibilities, is where we must live, believe and proclaim. Until recently, we lived in a social context where the similarities between the civil institution of marriage and the Christian sacrament were considerable and shared. The two were interrelated and mutually supportive. This is no longer the case. . . .

As pastors, we bishops are called to collect our energies and to rebuild enthusiasm for making families correspond ever more fully to the blessing of God which they are! We need to invest our energies not so much in rehearsing the problems of the world around us and the merits of Christianity, but in extending a sincere invitation to young people to be brave and to opt for marriage and the family. Here too, we need a bit of holy parrhesia! A Christianity which “does” little in practice, while incessantly “explaining” its teachings, is dangerously unbalanced. I would even say that it is stuck in a vicious circle.

As the Pope was flying back to Rome from the U.S. last night to gear up for the upcoming Synod battle starting this weekend, it seemed noteworthy that his trip coincided with a rare natural phenomenon: a 'supermoon' doubled with a lunar eclipse – a 'blood moon'. One could not help recalling the bolt of lightning that spectacularly struck St. Peter's Basilica on the same day Benedict XVI resigned the papacy (February 11, 2013), thereby paving the way for Francis.

Here in St. Louis, Missouri, from where I write, that coincidence took on a rather ominous note from the precise hour at which the super-eclipse began: 9:11 p.m. (This was announced in our local newspaper, the St. Louis-Post Dispatch on the morning of the same day, September 27, 2015, p. A13). The immediate result of the Holy Father's trip to the U.S. has been resoundingly, clamorously positive: huge, favorable media coverage, massive adoring crowds, and soaring approval ratings for Francis from Catholics and non-Catholics alike. But will this lead to any lasting progress for the Church and her mission in this country? Or will the long-term fall-out be more akin to a spiritual eclipse? Will more and more American Catholics – laity, clergy, and religious – adopt in word, deed, and omission what seem to be the liberal-leaning priorities of their present leader? After all, when the Pope himself sends a message that unborn lives, the radical homosexualization of our culture, and ever-increasing social and legal harassment of traditional Christians, should not be too high up on the Church's list of social injustices, why should Catholics “invest” much “energy” in resisting them? Why “unbalance” our Church “dangerously” by “incessantly explaining” Catholic “teachings” about such issues? Why not just move on, learn to live with these “changes,” and save our energies for more important (and more socially respectable) issues such as welcoming immigrants, denouncing income inequality, promoting tolerance and multiculturalism, and combating climate change?

The Episcopalians, United Methodists and certain other 'mainstream' Protestant groups have long been showing us the way in adopting those sorts of priorities. And as is well known, they are the most rapidly shrinking religious groups in the country.