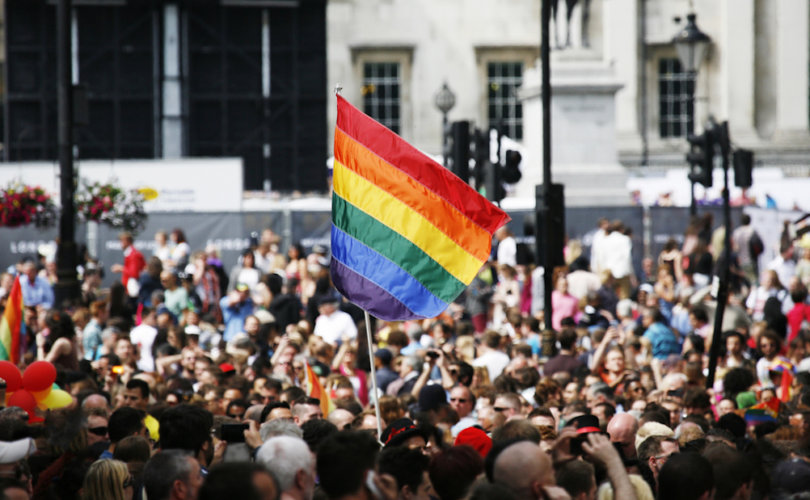 LONDON, May 18, 2017 (LifeSiteNews) – Parents in the UK have taken to social media to protest LGBT ideology being introduced into Catholic schools. An agency of the UK bishops has approved a program that in part draws material from high-profile LGBT activist groups.

The program, titled Made in God’s Image: Challenging homophobic and biphobic bullying in Catholic Schools, was produced by the Catholic Education Service (CES), an agency of the Bishops’ Conference of England and Wales, with a leading Catholic University, St Mary’s Twickenham.  It is purportedly to assist Catholic schools meet their government mandated obligation to address and challenge bullying among pupils.

Head Teachers’, teachers’ and governors’ performance in tackling bullying is monitored by UK government school inspectors, the Office for Standards in Education, Children's Services and Skills (Ofsted). Furthermore, all schools have a legal duty to ensure that pupils do not suffer any form of discrimination due to race, sex, sexual orientation and gender reassignment, amongst other protected characteristics set out in the Equalities Act, 2010.

Those Catholic parents protesting about the bishops’ agency program Made in God’s Image are not against taking appropriate measures to stop bullying and unfair discrimination in Catholic schools. They are protesting the program for focusing only on “homophobic” and “biphobic” bullying and distorting the Church’s teaching on sexuality, and homosexuality.

The scandal has deepened with the discovery that the CES programme uses unacknowledged material taken from the militant gay activist groups Stonewall and LGBTYouth Scotland. Stonewall has a reputation for being anti-Catholic, in particular through its “Bigot of the Year” award.

Ben Trovato, the pseudonym of the Catholic parent who posts on the blog Countercultural Father, has taken the lead in exposing the presence of material from LGBT groups in this CES programme.  Other Catholic parents who have expressed concerns about Made in God’s Image include Dr Joseph Shaw, Caroline Farrow and Mark Lambert.

Trovato told me about his concerns for children participating into the LGBT program:

What concerns me most about the CES programme is two things. Firstly, that this could lead to children having a wholly wrong, secular, understanding of human love and sexuality, that will do them great harm, rather than a truly Catholic understanding; secondly, that those charged with providing materials for Catholic Schools could not see that the philosophy underlying much of this approach is wholly at odds with a Catholic understanding.

The CES programme does not present a truly Catholic understanding

The authors of Made in God’s Image refer to the Church’s teaching on marriage and sexuality in the introduction, even referencing key magisterial documents such as the Catechism of the Catholic Church and the Congregation for the Doctrine of the Faith’s (CDF) definitive document, Letter to the Bishops of the Catholic Church on the Pastoral Care of Homosexual Persons.

But having referenced these magisterial documents, Made in God’s Image sidelines Church teaching on sexuality by stating:

This document does not seek to set out the Church’s teachings on relationships and marriage, as these are set out fully elsewhere, but it is situated within them. For the teachings themselves, reference should be made to the Catechism of the Catholic Church, particularly paragraphs 2331-2400.

Thenceforward, through omissions, selective quotes and the use of material from LGBT groups, the CES programme proceeds to present an understanding of homosexuality that is totally contrary to the teaching of the Church.  Simply put, homosexuality is presented alongside heterosexuality as a positive “sexual orientation” and “identity.”

For example, in the first lesson, Setting the scene on LGBT issues, 14-year-old children have to complete an exercise that matches words with definitions. So in a Catholic school pupils will learn that a “Lesbian” is “A woman who is primarily attracted to other women”, alongside the definition of a “Heterosexual” as “A person who is only attracted to members of the opposite sex. Also called ‘straight.’”

The CES’s neutral presentation of homosexuality alongside heterosexuality is the serious error addressed by the CDF in its Letter to the Bishops of the Catholic Church on the Pastoral Care of Homosexual Persons, which Made in God’s Image mentions in the introduction:

An overly benign interpretation was given to the homosexual condition itself, some going so far as to call it neutral, or even good. Although the particular inclination of the homosexual person is not a sin, it is a more or less strong tendency ordered toward an intrinsic moral evil; and thus the inclination itself must be seen as an objective disorder. Therefore special concern and pastoral attention should be directed toward those who have this condition, lest they be led to believe that the living out of this orientation in homosexual activity is a morally acceptable option. It is not. (Section 3)

It is indicative of the distortion of Church teaching on homosexuality found throughout Made in God’s Image that it selectively quotes Church teaching. It states, “The School should be mindful that the Church teaches that homosexual inclinations are not sinful” (p.5) without continuing with the crucial teaching, “it is a more or less strong tendency ordered toward an intrinsic moral evil; and thus the inclination itself must be seen as an objective disorder.”

The danger inherent in this LGBT program, carrying with it the authority of an agency of the Bishops’ Conference, is that it will lead the 14-year-old children at which it is targeted to “believe that the living out of this orientation in homosexual activity is a morally acceptable option” when the Church categorically declares, “It is not.”

Made in God’s Image includes quotations from Pope Francis about mercy and being non-judgemental but not his hard hitting warnings against LGBT ideological colonisation in schools. Since 2015 Pope Francis has challenged, through speeches and papal documents, the coercive imposition of gender ideology in schools. During his meeting with Polish bishops in 2016 the Holy Father said:

In Europe, America, Latin America, Africa, and in some countries of Asia, there are genuine forms of ideological colonisation taking place. And one of these – I will call it clearly by its name – is [the ideology of] “gender”. Today children – children! – are taught in school that everyone can choose his or her sex. Why are they teaching this? Because the books are provided by the persons and institutions that give you money. These forms of ideological colonisation are also supported by influential countries. And this terrible!

Gender ideology is at the heart of the Made in God’s Image program, with the word “gender” mentioned over 40 times. It even vaunts the benefits of exposing pupils to LGBT issues, especially to those children who display signs of being hostile, disinterested, nervous or discomforted during sessions: “Regardless of the reasons, hearing positive messages about anti-homophobia and LGBT issues can only be beneficial to them” (p.12).

The CES programme also appears to be seeking to coerce adherence to its ideology through a series of inherent threats of punitive action by Ofsted inspectors. It states: “In making judgements, inspectors will pay particular attention to the outcomes for the following groups: lesbian, gay and bisexual children and learners; transgender children and learners” (p.10).

The concern raised by Pope Francis about finance being used to impose gender ideology on Catholic schools is also an issue in the CES scandal. In the email promoting Made in God’s Image to dioceses, the CES stated that they had “received funding to cover the printing and distribution of a hard copy for each school.”

The question raised by concerned Catholic parents is, who has provided the funds to distribute LGBT ideology to Catholic schools? Was it Stonewall? In a statement to The Catholic Herald newspaper, the CES stated, “The document is a collaboration between the CES and St Mary’s and no external funding has been received for it.” Then why mention the extra funding in the first place?  The self-contradictory nature of the two statements about funding raises serious questions.

Stonewall has denied “that the group had any specific involvement with the production of the document,” but praises the Bishops’ agency for using its material. Stonewall welcomed Made in God’s Image as a “positive and welcome step from the Catholic Education Service.” Terence Weldon, the Catholic gay activist who runs the blog Queering the Church, highlights the significance of the CES using Stonewall’s material: “What I find particularly striking about this initiative, is that deliberately or not, the English bishops have in effect entered an informal partnership with Stonewall.”

And this takes us to the heart of the scandal. English bishops have oversight of the actions of the Catholic Education Service, with five of them members of the Management Committee. Catholic parents have a right to respectfully ask these bishops: Why, instead of dealing with the issue of bullying, have they approved what amounts to an LGBT Trojan Horse in their children’s schools?