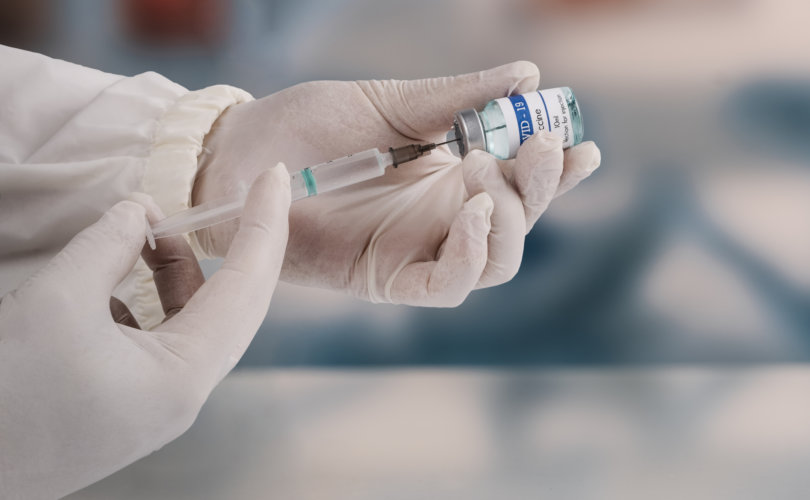 (The Daily Sceptic) – The latest ONS data on deaths by vaccination status show that of the 5,678 COVID deaths in April and May, 93 percent or 5,276 were of vaccinated people. Given that the government’s Coronavirus Dashboard reports that 93 percent of the over-12 population had a first dose of the vaccine, 87 percent had a second dose, and 70 percent had a third dose, these real-world data suggest that the vaccinated did no better than the unvaccinated in being protected against death.

Many readers will be familiar with the ongoing debate about vaccination statistics and the size of the unvaccinated population. We know how many people have been vaccinated with the first, second, third, and fourth doses of vaccine but we don’t know what the population of the U.K. is so we can’t know exactly what percentage of the population the vaccinated represent.

Of course, vaccine take-up varies greatly with age and vaccine efficacy (or lack of efficacy) depends on how many doses you’ve had and when you had your last dose.

Figure 2 shows vaccine uptake for the first three rounds of vaccine, though not the spring second booster campaign among over-75s. On the right-hand-side of the chart I’ve drawn the 90 percent, 80 percent, and 70 percent lines in red to make reading easier. I’ve then written in red the age cohorts that fall in various percentage tranches. Broadly speaking, 90 percent of people over the age of 70 have had all three doses, whereas, if you look at the 50–59-year-olds, you’ll see that only about 75 percent have gone on to have the booster dose.

I’ve then inserted a table showing the approximate uptake of the various vaccine doses by age cohort that will then be used to compare vaccine uptake to the death data.

I should add that this level of accuracy is somewhat spurious and overstates the percentage of the various age cohorts that have taken up the vaccines.

There’s been quite a lot of controversy about the percentage take up of vaccine due to the mystery surrounding the U.K.’s population. The problem was first addressed by Professor Sir David Spiegelhalter, who brought up the complications around the NIMS and ONS datasets; I wrote a piece taking issue with some of his findings here.

Professor Norman Fenton also covered this in his recent critical review of the BBC’s “Unvaccinated.”  I won’t revisit the debate here except to say that I think most would agree that the estimates for the proportion of people vaccinated by age group tend to be a bit overstated, so let’s simply regard them as a ceiling.

It’s perhaps also worth noting that Professor Fenton has also criticised the ONS data for undercounting COVID deaths, but, as with the percentage of vaccine uptake, I’m going to use the ONS’s figures as that is what the government has published.

These figures are in line with the proportion of deaths amongst the vaccinated being shown in the U.K. Health Security Agency (UKHSA) data up to the point when the data stopped being published at the end of March. The final report can be found here, with the real-world data found in tables 12 and 13, which show that the proportion of deaths by vaccination status were much the same then as in April and May.

The maximum percentage of the population vaccinated is just over 90 percent, yet the percentage of deaths in April and May was also over 90 percent. Why is this important? Because, what’s always needed in any experiment is a “control group,” a group of people who didn’t participate in the experimental drug, vaccine, or whatever was the subject of the study. If the vaccines are effective in preventing deaths you’d expect to see a higher rate of fatalities among the people who didn’t take the vaccines. But we don’t.

Let’s go into a little more detail. Around 99 percent of the deaths in April and May occurred in the over-50s, so I’ll only look at these older age groups.

In the 50–59 age cohort there were 105 deaths in April and 47 in May. In April 86 percent and in May 87 percent of the deaths were of vaccinated people. The third column in grey shows the estimated percentage of people in this age cohort who had either no vaccine or the various doses.

The unvaccinated do not appear to have suffered disproportionately to the vaccinated. While at least 13 percent of this cohort have never had any vaccine dose at all, they accounted for less than 14 percent of the deaths in April and May.

And finally, figure 7 shows the situation for the 80-plus cohort. In this age cohort, just about everyone who had the first dose turned up for their second and third dose and quite probably their fourth dose too, but it doesn’t seem to have made much difference to the outcome. Again, it’s perfectly clear that with 94 percent of the deaths occurring amongst the vaccinated, the 6 percent unvaccinated are proportionately no more at risk that the vaccinated.

Similar findings were reported in The Daily Sceptic recently for Canada and the Netherlands so this isn’t British exceptionalism.

Why might this be? Waning efficacy perhaps. However, they’ve been at this level for some months, suggesting that isn’t the whole story. Maybe the unvaccinated are a self-selecting group who are disproportionately healthy or have been previously infected – though if so that would need to be shown not assumed.

Whatever the reason, the ONS data clearly raise important questions that need addressing. They seem to confirm that in the real world, regardless of how many doses of vaccines someone may have, it makes absolutely no difference to the likelihood that they may die from COVID.