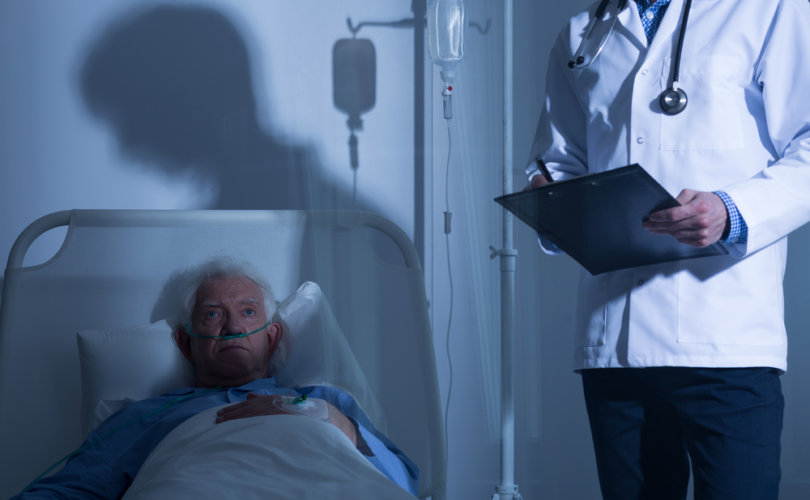 May 14, 2019 (LifeSiteNews) — Last weekend, a British newspaper reported on a legal first: A hospital was fined for “false imprisonment”; that is, for refusing to allow a patient to leave.

The details are complicated, but certain facts stand out.

The patient was unable to make decisions for herself, but devoted family members — two of whom were medically qualified — visited her daily. Doctors had written on the patient’s notes that the issue of her discharge was not to be discussed with them, however. The final act of the drama was her transfer to a nursing home without the family’s knowledge, let alone agreement, where she died shortly afterward.

This judgment sets a new precedent in English law, and I hope that it will not only enable patients and their families to get legal redress, but also begin to change the culture of those institutions themselves. The ruling may (up to now) be unique, but the situation certainly is not. Indeed, it so happens that I have myself very recently had firsthand experience of the attitude of Britain’s National Health Service (NHS) in a similar case, the difference being that we won our battle to get a loved one discharged.

I had the opportunity, in a meeting that will be forever seared on my memory, to probe, along with other family members, exactly what is going on in the minds of these hospital managers.

“So,” they seemed to be saying, “we accept that it is very probable that the patient’s condition will improve if she goes home, with care from family members supplemented by regular medically-qualified support, support which will not cost the NHS a penny. We further accept that her prolonged stay in the hospital is having bad effects on her condition in both physical and psychological ways. And yet, we don’t want her to go home, because … because we’d like her to have improved in some of the ways which we acknowledge that we are making her worse, before allowing her to go home, where we acknowledge she will improve in these very same ways.”

There was an element here of box-ticking insanity, the kind of thing that can happen when badly written bureaucratic protocols discourage the use of common sense. However, there was more to it than that. The managers had convinced themselves that they knew best, and their purpose in having this meeting was, in fact, to explain to us why we were mistaken. It pained them to let go of the power they had over the patient; power, of course, they intended for good, but power all the same.

The combination of this attitude with an ever-increasing acceptance of active and passive euthanasia leads to a very dangerous situation.

It reminded me of the debate over the origins of the National Health Service after the Second World War. Up until then, there was a distinction between charitable hospitals and municipal (local government) hospitals. Catholics gave self-sacrificially to Catholic charitable hospitals, usually run by nursing sisters, because they had a very different spirit from the municipal ones. A Scottish bishop remarked when a Catholic hospital in his diocese was in financial straits during the war that if were taken over by the state he hoped it would not “become one of those heartless places.” Catholics came up with the money and it was saved.

The establishment of the NHS involved the state takeover of the vast majority of these charitable hospitals, a great many of which were then closed in the name of efficiency. The mastermind of the plan was Labour Party politician Aneurin Bevan. He referred to the popular perception of charitable hospitals, which were often small, when he remarked in 1946:

I would rather be kept alive in the efficient if cold altruism of a large hospital than expire in a gush of warm sympathy in a small one.

It is something of an irony that today the National Health Service is a byword for inefficiency (with a high rate of absenteeism), but is widely appreciated for its warm sympathy, at least at the level of day-to-day care. It is the decision-makers in this vast institution’s chaotic hierarchy who come in for criticism. It would seem that they have inherited the heartlessness of their municipal predecessors but lost the efficiency.

Any large organization is prone to the tendency of coming to exist for the sake its employees, or at least those of them who achieve a certain seniority, rather than its owners or clients. Where these employees have great power over clients, this is a particularly troubling situation. As Britain leaves behind a culture informed by the Christian spirit, even a legal system newly prepared to challenge the abuses of the National Health Service will be hard put to ensure that the real interests of patients — and the desires of their families — are given their proper weight.