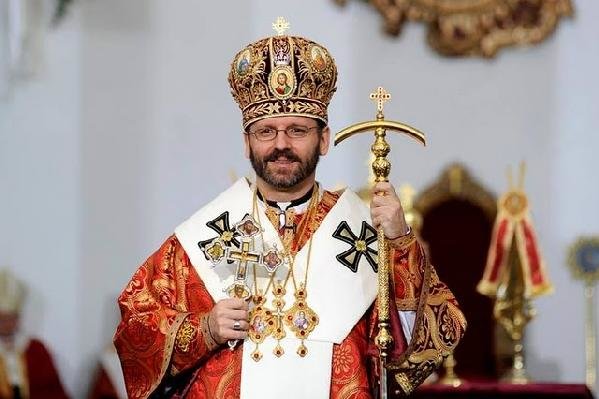 October 22, 2015 (VoiceoftheFamily) — Voice of the Family is delighted to continue to share further powerful statements made by representatives of the Catholic Church in Eastern Europe during the Synod on the Family. Below we reproduce interventions by His Beatitude Sviatoslav Shevchuk, head of the Ukrainian Greek Catholic Church, and Bishop Hlib Lonchyna, Ukrainian Catholic bishop in London, UK (texts courtesy of Fr Athanasius McVay). These interventions speak for themselves and therefore need no introduction. We would simply say that the doctrinal clarity and pastoral love shown by these and similar contributions from the Church in the East are teaching the Church in the West about true mercy.

The modern family in Ukraine is marked by difficulties of post-communist society, which undergoes rapid social and cultural emancipation….

Next year the Ukrainian Greek Catholic Church will mark the 70th anniversary of its forced liquidation by Stalin in the Soviet Union and forced amalgamation to the Russian Orthodox Church [in the “L’viv Sobor”]. From that time, a Via Crucis began for bishops, priests, monks and nuns, and above all the numerous Christian families who were torn from their land and relocated in the wide Siberian wilderness…

During this period of persecution of the Church, families became hearths where faith in God was preserved and where new generations have received the gift of faith, becoming authentic domestic churches. In their houses, underground priests made sure to find hiding places for the Lord’s altar where, during the silence of the night, they celebrated the Eucharist and the other Holy Sacraments….

[After the collapse of the Soviet Union, when the Ukrainian Greek Catholic Church faced new challenges in the form of mass migration] families of believers, especially mothers, once again brought our Church to countries where we had more recently become present, particularly in Western Europe. Often these Ukrainian mothers and grandmothers restored Christian and human values in Italian, Spanish, and Portuguese families, and others. Many elderly people in these countries passed to eternity, reconciled with God and received the Sacrament of Holy Anointing, thanks to a Ukrainian nurse….

Even in the current time of the war in Ukraine, in the face of another challenge of a real and severe economic crisis, Christian families welcomed [displaced] migrants and [became] the source of an unforeseen power of solidarity… According to UN estimates, in Ukraine there are [more than one] million Internally Displaced Persons, most of whom have been helped by Ukrainian families, the fundamental cell of society…

Today I have to affirm that, in the past, the family defended and preserved the Church. Today the Church has a sacred duty to protect and preserve the family; the family as the faithful, fruitful, and indissoluble union between a man and a woman…. My faithful asked me to appeal to the Synod Fathers to remember that we, the bishops, are not the masters of the revealed truth about the family, but rather its servants. Today, our people expect…us to confirm and emphasise the Church’s teaching on the family, clarified and summarised by Blessed Paul VI and Pope St John Paul II.

Holy and devout families, strengthened in faith, find, on their own, the most creative ways to answer the challenges of modern society and teach us how to show mercy to those who are experiencing difficulties. We can not solve all the problems with which the world is trying the family, but we can preach the Gospel truth about the family and help the next generation, with God’s help to go forth along the path to holiness.

“Jesus looked upon the women and the men he met with love and tenderness, accompanying their steps with patience and mercy, in proclaiming the demands of the Kingdom of God” (Instrumentum Laboris, 37).

The face of God, as His Holiness reminds us, is the face of mercy. This is the face we, the Church, must show the faithful and the unfaithful, people of good will and those who seek not the Lord. Our task is to manifest God’s everlasting mercy (see Ps 136).

Yet, if mercy is boundless, why does not everyone experience it? Because mercy cannot be encountered unless it is measured against the eternal law, which is truth. “Mercy and truth have met together”, says the psalmist (Ps 85:10 NKJV). One must seek the truth in order to experience mercy.

The first words Jesus uttered when he began his public ministry were, “The kingdom of God is at hand. Repent, and believe in the gospel” (Mk 1:15). Jesus is uniting mercy with truth, as did the psalmist. In order to enter the kingdom – the gift of God’s mercy – Jesus calls his disciples not to self-fulfilment, not to having fun, but to repentance and faith. This entails a change of mentality: from the ways of the world to the ways of the kingdom, from thinking only humanly to having the mindset of Christ (see Phil 2:5).

Jesus is showing mercy by calling people to conversion. Pope Saint John Paul II illustrated this in the third Mystery of Light: Jesus’ “proclamation of the Kingdom of God, with his call to conversion” (Rosarium Virginis Mariae, 21). Mercy means leading a person to the truth. Mercy means challenging people. Mercy means not covering up reality with gift wrap.

The Church should not be afraid to speak the truth about marriage and the family. The “demands of the Kingdom of God” are indeed sublime, out of reach, not attainable by our own means; nevertheless, they make us free when – with the grace of God – we seek to fulfil them.

However, maybe we fear being irrelevant, out of touch, not modern, not merciful. Perhaps this is because we do not trust that the Spirit is guiding us; or the Word is not strong enough; or it will not appeal to our secularised world.