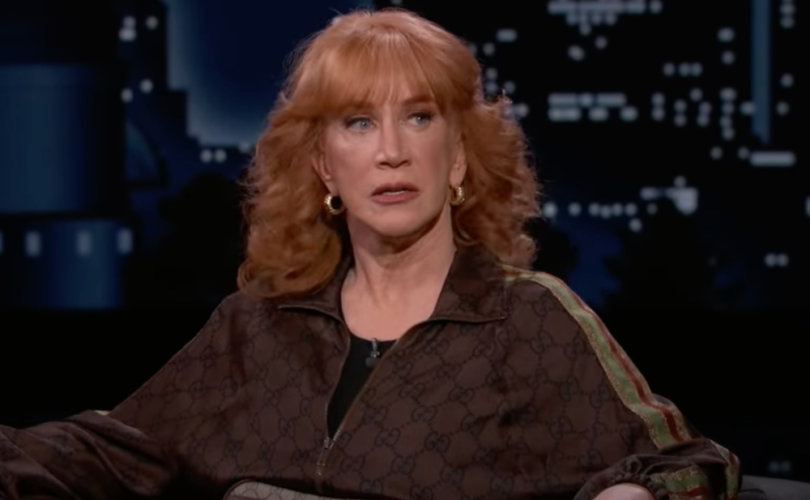 (LifeSiteNews) – Kathy Griffin—the female comedian who, in 2017, tweeted a fake picture of Trump’s decapitated bloodied head—recently tweeted: “If you don’t want a Civil War, vote for Democrats in November. If you do want Civil War, vote Republican.”

Griffin has a long history of inflammatory comments—both for abortion and against Christianity. In 2007 at an awards ceremony, she accepted an Emmy saying, “A lot of people come up here and thank Jesus for this award. I want you to know that no one had less to do with this award than Jesus.” She followed that up by saying, “Suck it, Jesus. This award is my god now.”

In 2015, she tweeted: “Planned Parenthood is essential. Ignorance is intolerable. . . . Are u brave enough to shout out abortion?”

The list of disgusting comments goes on and on.

Aside from Planned Parenthood, I can’t think of a better example of a pro-abortion bully than Griffin.

What is it about the invented right to kill a preborn child that has people so angry and so willing to talk about war?

But sadly, when you truly think about it, we are already at war—and we have been for quite some time. According to Merriam-Webster, war is “a state of hostility, conflict, or antagonism.”

Isn’t hostility toward preborn babies—and anyone who defends them—already what many in our nation exhibit?

With groups that bomb pro-life pregnancy centers and that create threatening manifestos, we have to know that the war has been raging for years. It’s only now that Dobbs has reversed Roe v. Wade and sent the decision regarding abortion back to the states that women such as Griffin feel the need to post threats.

In a typical war, two or more sides fight. Usually the stronger wins, but at least the weaker side has somewhat of a chance. But the victims of the war on the preborn cannot even put up a fight.

So when organizations like Planned Parenthood or Hollywood hotshots like Griffin tweet nonsense about war, what are we to do? Do we close the news tab and pretend we didn’t see it? Do we roll our eyes and keep our mouths shut? Or do we speak out about the absurdity of threats such as this and tell the truth loudly and clearly in the hopes that someday people will come to understand the humanity and beauty of the preborn child?

For too many of us, it’s the former.

We have all seen the anti-bullying campaigns on TV. Many of us have seen schoolyard bullies taunt their weak prey. Maybe we have even been on one side or the other. So we know that the only way to stop a bully is to stand up to him.

That is what we must peacefully do to pro-abortion bullies.

History and the Bible repeatedly teach the importance of standing up for the weak and the vulnerable.

Ephesians tells us to “put on the armor of God, that you may be able to resist on the evil day and, having done everything, to hold your ground.”

Proverbs tells us: “Open your mouth in behalf of the mute, and for the rights of the destitute; open your mouth, judge justly, defend the needy and the poor!”

And Christ tells us: “Amen, I say to you, whatever you did for one of these least brothers of Mine, you did for Me.”

No one could be more appropriately counted among the least of these than the preborn baby. Our country has waged a war not only on babies but on motherhood, on authentic femininity, and on the family. The values we consider right and good have been tossed in the trash, stomped on, and torn apart so that women can have a “right” to do what they want with their bodies and so that they aren’t “stuck” with a baby they don’t want.

So as we reflect upon ridiculous statements such as Griffin’s, let us vow to use our voices to tell the world the truth about abortion and to not apologize for taking that stance.