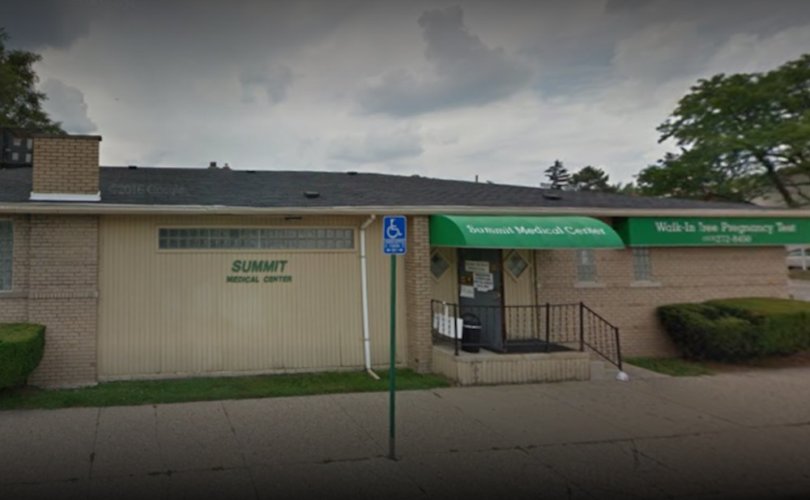 October 14, 2016 (LifeSiteNews) — On Saturday, October 1, an incident occurred at the Summit Medical Services abortion center in Detroit that resulted in the arrest of a pro-lifer, Joanne Moening, who was sidewalk counseling with the pro-life group Guadalupe Workers. Moening, who was physically assaulted by one of the pro-abortion escorts, felt a need to defend herself with the use of pepper spray. Moening called 911. But when the Detroit police arrived, they arrested her and she spent the weekend in a Detroit lockup. She was released on Monday, October 3, and is now unjustly facing a felony assault charge.

This article, however, ultimately wishes to focus on the reactions of those who support abortion and the pro-abortion clinic escorts to the incident at Summit and the pro-lifer’s arrest. All of the quotes below were posted on the Facebook pages of the pro-abortion woman involved in the incident —and that of another Summit Medical Services clinic escort. The level of sheer hate and vitriol is plainly evident and the character of those who support abortion clearly revealed. The comments, in their own words, are vile, violent and shocking in their level of uninhibited contempt and ill-will toward those with whom they disagree.

The comments demonstrate that these clinic escorts completely prejudge and misjudge the motives of pro-lifers and see pro-lifers as mere caricatures and not as real human persons. Moreover, it is also interesting to note how they view themselves. They truly believe that they are on a mission to defend and protect women seeking abortion — that they, not pro-lifers, are engaged in altruistic gestures. They believe in their own version of a world of good vs. evil; they are the good ones, the “anti-choicers” the evil ones who they believe do nothing more than harass and intimidate women to not get abortions.

Of course, nothing in the numerous posts admits that the pro-lifer was assaulted. Rather the pro-lifer’s use of pepper spray to defend herself is characterized as completely unprovoked!

Comments on the arrest of the Detroit pro-lifer and the work of sidewalk counselors:

Note the memo below. It is untrue that clinic escorts do not assault pro-lifers. Indeed, the author of this article was physically assaulted by a clinic escort (initials D.E.) during a pro-life picket organized by Citizens for a Pro-Life Society on August 20, 2016, at the Summit Medical Services, and the clinic escort may be facing criminal charges. Moreover, it was the pro-lifer who was assaulted by the pro-abortion escort on October 1 and used the pepper spray (not very effectively) to defend herself in a situation that was very threatening to her.

This lady just got arrested for pepper spraying someone (a volunteer) at a reproductive health clinic in Detroit. The volunteers are here for the patients. We do not assault or harass people, but apparently the anti-choicers think it's okay to do so.

Feel free to share the hell out of this.

Below is a photo of Edmund Miller, founder of Guadalupe Workers. It was taken by a pro-abortion clinic escort at the Summit Medical Services clinic and posted on the Facebook page of the woman who assaulted Joanne Moening on October 1. Below is what the pro-abortionists and clinic escorts say about Miller, posted August 31, 2016. Members of Guadalupe Workers have saved dozens of babies from abortion and spent countless hours and literally tens of thousands of dollars helping the very needy mothers in Detroit. The pro-abortionists, the clinic escorts simply do not realize the truly heroic nature of what sidewalk counselors do to aid women in need and save babies from abortion. Notice the post that comments on the drawing of Saint John Paul II on Miller’s T shirt.

Chantal    F**k that asshole–thank you for supporting the safety of women recieving the support/services they have every right to without harm or harrassment!

Montoya  He seems to have some vomit on his shirt. Better clean it up.

Divina  f**k this dude so hard.

Elizabeth     Some one get the banana slicer

Brad  Did you catch where he teaches? I'd like to write a letter.

Maggie  I was hoping someone would notice him so I could write them too. Thank you to my beautiful friends sharing it but only our mutuals can see it because my profile is super locked down, if anyone wants to reshare the pic that's cool though, he deserves it.

Авву  Please let us know if you end up figuring out where this dude teaches. That is such a terrible thought to imagine this toxic person in the schools.

Anyone notice him? Regardless, I'm fine, clinic escorting was great and I'm excited to do it again. F**k people that harass people outside clinics, worst hobby for the worst people. I have SO MUCH MORE respect for my friends who work in clinics and spend everyday helping.

Mike  Let me know the next time you are going to do this, I want to come down there and protect these people from them

Adine  What a sad sad life these people must live

Lord, Look upon me, have pity on me,

for I am alone and afflicted.

Relieve the troubles of my heart;

bring me out of my distress.

Look upon my affliction and suffering;

take away all my sins.

Behold my enemies are many and

They hate me violently.

Preserve my soul and rescue me;

do not let me be disgraced, for in you I seek refuge.

Let justice and righteousness preserve me;

for I wait for you, O LORD.

from all its distress!

Monica Migliorino Miller, Ph.D, is the director of Citizens for a Pro-Life Society.