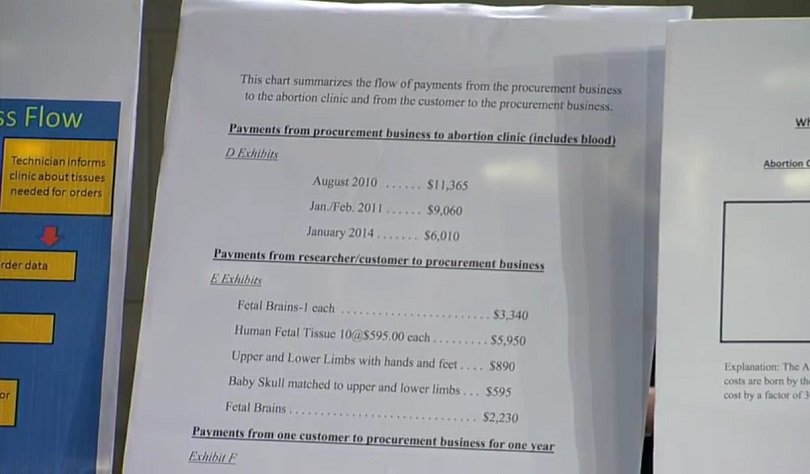 Although the report was originally published May 9, 1978, its discovery comes during Congressional investigations into current alleged illegal activity surrounding the sale of aborted baby body parts for research, exposed by the Center for Medical Progress (CMP). The 1978 report reveals that research on aborted babies has tragically been taking place in our country for decades. But what is even more shocking is that in this case, it wasn’t a private company like StemExpress seeking out aborted children for research — it was a federal government agency.

According to the document, the GAO was tasked to review the EPA’s contract with Automated Medical Services of Ohio, Inc. (AMSO), for the testing of human fetuses for pesticide residues. The EPA entered into the contract with AMSO after a second company, Technological Resources, Inc. of New Jersey, declined to bid on the overall contract because of the “delicate and controversial nature of obtaining aborted fetuses and tissues,” among other reasons.

The GAO report reads in part:

The contract specified that human embryos and fetuses should be collected from legal abortion clinics and from private physicians performing legal abortions. Samples were to be analyzed to determine the concentration in various tissues of chlordane, heptachlor: their metabolites, and up to [illegible] other pesticides which may be used as chlordane or heptachlor substitutes. The contractor was also responsible for obtaining pesticide exposure histories from the mothers and for complying with all Federal, State, and local requirements for tissue collection.

AMSO told investigators that all “specimens” were obtained from “legal abortion clinics” in San Francisco, California, and Cincinnati, Ohio, and that no entire “fetus or embryo” was collected. The “samples” were then stored in a “laboratory freezer in small glass bottles with screw-on lids.” AMSO stated that neither the abortion clinic nor the women were paid for the “samples.” The GAO does not identify the names of the abortion facilities where the aborted babies were obtained, but they did raise questions about whether AMSO acquired the proper consent for the research — a question quite relevant today, as the Select Investigative Panel on Infant Lives is investigating whether today’s abortion facilities have violated laws regarding patient consent and privacy. The GAO report continues:

AMSO collected 43 samples from a clinic in San Francisco, California, and 46 from a clinic in Cincinnati, Ohio. Signed consent forms and exposure histories were available for 33 of the 43 San Francisco specimens; the remaining 10 could not be located. The EPA project officer told us in December 1977 that AMSO now had all documents on file. Exposure histories were available for all 46 specimens collected in Cincinnati; however, signed consent forms were not available. Instead, AMSO had a list of 46 signatures which AMSO said were obtained from participating women after they were read a statement similar to the one on the California consent forms. We did not contact the women to verify that AMSO fully informed them about its use of the tissue samples because of the confidentiality promised when consent was obtained.

During our visit to AMSO in September 1977, we asked to see documentation regarding the consent forms (or signatures) and exposure histories for fetus samples taken. We were shown data on 79 of the 89 tissue samples. After our visit, we became aware that the contractor had collected 12 additional fetus samples in Cincinnati during December 1975. AMSO did not tell us about or show us the consent forms (or signatures) or exposure histories for these 12 cases. At our request, the EPA project officer called and was told that AMSO had the appropriate documents on file.

AMSO, which allegedly generated millions of dollars a year, was operated by Dr. Raymond Thabet, a Mansfield, Ohio, county coroner. In 1994, Martin D. Yant, an investigative reporter and editor who later became a private investigator, published details of his research on the AMSO founder. In his book, Yant describes the sanitary conditions at AMSO as “poor.”

For example, fetuses obtained from abortion clinics under a federal contract and fetuses from other medical customers, accumulated in boxes in the basement of the lab, despite the foul order they gave off. Just before a federal licensing inspection in 1976, Thabet had about 500 of the fetuses buried behind the laboratory building.

Thabet later sued reporters for defamation, calling the claim that he had buried fetuses behind his lab false.

But Thabet’s trust factor wore thin even among those who used his services. After an FBI investigation showed possible inaccuracies among thousands of Pap smear tests conducted by Thabet’s labs, Planned Parenthood clinics in Ohio, Indiana, and Michigan who had been using the AMSO laboratory for analyzing pap smears were forced to warn their patients not to trust AMSO test results, according to news reports.

At the time of the EPA’s contract with AMSO, there were no federal laws restricting the use of aborted fetuses for research. However, the GAO report indicates that there were state restrictions in both California and Ohio. Although AMSO insisted that it had complied with those state requirements, a California State Department of Health official raised questions that the project had not been cleared as required through its Human Subject Review Committee. The official said the Committee was quite concerned about such projects because abortion procedures might be changed to avoid contaminating the tissue and because the clinic primarily served women on welfare.

The process of changing abortion procedures when attempting to harvest body parts has been an issue in the current Congressional investigations. In 2015, the Center for Medical Progress revealed abortion providers’ willingness to discuss illegally altering abortion procedures in order to obtain more intact fetal ‘specimens’ — a violation of federal law – and also noted that fetal tissue researchers want to make certain that their ‘specimens’ are free of digoxin, a heart drug that is often misused to ensure fetal death during a late-term abortion.

While the document in the 1978 case does not specify whether this in fact occurred, California officials were concerned about the legality of what EPA’s AMSO study was doing. Ohio officials gave conflicting responses to the study, leaving the GAO to suggest that issues raised “regarding compliance with State procedures and the adequacy of the consent forms are matters which should be referred to the States involved.” In the end, the GAO concluded that the $320,000+ research contract should not have been awarded.

Although this document is 40 years old, it shows that from the beginning of nationally legalized abortion, there has been a consistent attempt by abortion profiteers to parcel out the body parts of innocent preborn children without regard for the sanctity of human life.