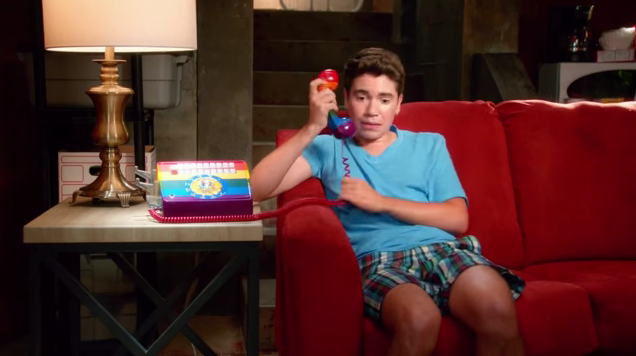 Sadly for Kenny, his entire identity is based on how gay he is and, to him, you can’t be gay unless you’re having gay sex: he says he’s gay “in theory, not in practice.” Here we have Kenny – an underage boy, mind you – talking about “getting action” and using a dating app to pick up men. He bemoans being “completely alone in a forest of straight people” and wanting to find a place where “gay guys come to gather nuts and berries.”

Kenny notes that many users only use “their best body parts” as a profile picture – gee, wonder which parts. The show apparently thinks of gay people as not only stereotypes but as body parts and, even worse, Kenny considers himself worthless for not being accepted by these people.

Kenny: Another day of being gay, in theory, and not in practice, unlike my siblings, who are getting more action on their devices than I've gotten all year.

Jimmy: Oh, man! I love dating a college girl! Lacey's at a party, and I think she's getting a little tipsy. So you two might want to clear the couch, 'cause I sense this texting is about to get steamy.

Shannon: With or without us on this couch, please never get steamy on it.

Kenny: That blanket probably has more stories to tell than I do.

Kenny: All right, you guys get off your screens and talk to me! Is there something wrong with me? I mean, I feel like my bangs are at their best angle ever, I found a deodorant that works with my active lifestyle. I mean, is it me? Just be honest.

Shannon: Well, sometimes you do go on without really hearing –

Kenny: I mean, am I even gay if I'm just sitting on the couch with you two? If a gay falls in the forest, and there's not another gay to say, “Hey, girl, you okay?” Did he even fall? The problem is that I'm completely alone in a forest of straight people. I need one where more gay guys come to gather nuts and berries.

Shannon: Come on, Kenny. You know how to find a more crowded forest.

Kenny: Really? Not my biceps?

Shannon: Please show me where you think your biceps are located.

Jimmy: They're the most manly part of your body. It's like your upper half didn't tell your lower half you're gay.

Kenny: MM. Okay. Here we go. I am stepping, calf-first, into a whole new forest.

Eileen: Kenny, take your foot off the table. Excuse me. Where are you coming from in your New Year's cardigan?

Eventually Kenny learns to value his own opinion of himself over the creeps on the Internet, but the creepiness of having a teen boy exploring the gay dating app world still stands.