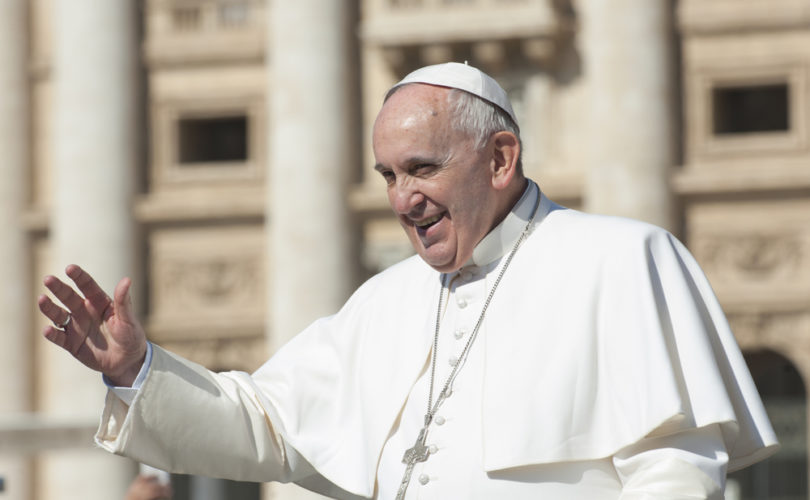 February 29, 2016 (LifeSiteNews) — The Holy Father has started another furore with his latest off-the-cuff interview on the plane ride back from his pilgrimage to Mexico.  I would recommend that all those interested read the entire text of the interview, or at least the relevant bits.  As I have written before, it is always good to go back to the sources, and make up one’s own mind.

Now, before I offer my own two cents’ worth, we should reiterate that truth requires that one make the proper distinctions, which Saint Thomas states is the primary mark of a clear and informed intellect.  As I have also written, it is to some degree the task of the Pope (and any teacher) to make those distinctions for his listeners.  But there is also a duty for the listeners to make the distinctions implicit in what is taught.  This is especially the case if the teacher, in this case the Holy Father, for whatever reason, does not clarify what he says (alas).

Holy Father, for several weeks there’s been a lot of concern in many Latin American countries but also in Europe regarding the Zika virus. The greatest risk would be for pregnant women. There is anguish. Some authorities have proposed abortion, or else to avoiding pregnancy. As regards avoiding pregnancy, on this issue, can the Church take into consideration the concept of “the lesser of two evils?”

The Holy Father unequivocally condemns the abortion option, and very rightly so.

Abortion is not the lesser of two evils. It is a crime. It is to throw someone out in order to save another. That’s what the Mafia does. It is a crime, an absolute evil.

However, on contraception, the Pope is somewhat more ambiguous.  As he continues:

On the ‘lesser evil,’ avoiding pregnancy, we are speaking in terms of the conflict between the fifth and sixth commandment. Paul VI, a great man, in a difficult situation in Africa, permitted nuns to use contraceptives in cases of rape.

This response, to put it mildly, is problematical.  Here are what I consider the key distinctions that must be made here, which I wish the Holy Father himself had made in his response.

The questioner implies such a conflict between the sexual expression of the couple, and the potential risk to the child.  He does not raise the word ‘contraception’, but it is clearly implied, and the Holy Father takes the question as such.  The Church has always permitted periodic abstinence to avoid pregnancy for serious reasons even if such avoidance of the great gift of a child is perceived as an ‘evil’, that is, a physical, not a moral evil. Here is Bd. Paul VI from his 1968 encyclical Humanae Vitae (#15):

If, then, there are serious motives to space out births, which derive from the physical or psychological conditions of husband and wife, or from external conditions, the Church teaches that it is then licit to take into account the natural rhythms immanent in the generative functions, for the use of marriage in the infecund periods only, and in this way to regulate birth without offending the moral principles which have been recalled earlier.

Whether the apparent correlation (not yet fully verified, as far as I know) between Zika and microencephaly is a serious enough reason to avoid a pregnancy, even indefinitely, is a question the couple must answer in their conscience, hopefully with good spiritual advice.  I personally would not think so but, then again, conscience is by definition particular.

Following upon this, the principle of double-effect, to which the questioner alludes, only applies to physical evil.  That is, one can tolerate such a physical evil to avoid a greater evil, or, at times, obtain a significantly greater good.  A limb can be sacrificed to save one’s life, and, in these days of Lent, abstinence and fasting, to some degree painful in themselves, are recommended for their spiritual and even physical benefits.

However, one may never do moral evil, not even a ‘small’ moral evil, for the sake of a good, no matter how good, nor to avoid an evil, no matter how evil.  This is a consistent and irreformable teaching of the Church going back to Scripture (cf., Romans 3:8), which even the Pope is not free to change, nor from which he can grant dispensations.  The natural moral law admits of no exceptions, even for the gravest of reasons, indeed even to the point of giving up one’s life in martyrdom (cf., Veritatis Splendor, #82; #90-94.  The whole section, indeed the whole document, is well worth a read in our day and age).

The reason for this is that although there is a proportion between two physical evils (or goods) which can be compared and weighed, there is no such proportion between physical evil and moral evil, for the latter is always infinitely ‘worse’ than the former.  Physical evil harms only the body (which is headed for death one way or the other), but moral evil corrupts the soul and, as Pope John Paul put it, such acts render one unfit to realize one’s final end, the ultimate tragedy (cf., Veritatis Splendor, #78-80).  “Do not fear those who kill the body but cannot kill the soul” our Lord warned “rather fear him who can destroy both body and soul in hell” (Mt 10:28).

In fact, in the next section of the encyclical (#90-94), John Paul emphasizes the need for everyone to be willing to face martyrdom, to witness unto death, rather than compromise on committing such intrinsic evil.

To emphasize the point with Victorian flourish, here is Bd. Cardinal Newman from chapter 5 of his Apologia:

The Catholic Church holds it better for the sun and moon to drop from heaven, for the earth to fail, and for all the many millions on it to die of starvation in extremest agony, as far as temporal affliction goes, than that one soul, I will not say, should be lost, but should commit one single venial sin, should tell one wilful untruth, or should steal one poor farthing without excuse.

It is, furthermore, a consistent, irreformable teaching of the Church that contraception is one of those moral evils that admit of no exceptions.  Following upon numerous other documents from the very origins of the Church, Humanae Vitae declares contraception an ‘intrinsic evil’, that does grave harm to those who practise it (cf., #14).  Here are the solemn words of Pope Saint John Paul II in his aforementioned 1993 encyclical Veritatis Splendor:

With regard to intrinsically evil acts, and in reference to contraceptive practices whereby the conjugal act is intentionally rendered infertile, Pope Paul VI teaches: “Though it is true that sometimes it is lawful to tolerate a lesser moral evil in order to avoid a greater evil or in order to promote a greater good, it is never lawful, even for the gravest reasons, to do evil that good may come of it (cf. Rom 3:8)–in other words, to intend directly something which of its very nature contradicts the moral order, and which must therefore be judged unworthy of man, even though the intention is to protect or promote the welfare of an individual, of a family or of society in general”  (paragraph 80).

Pope Francis does not directly permit contraception, but by alluding to the supposed permission given several decades ago by Paul VI to the nuns in Africa who faced the threat of violation by rampaging soldiers (which now seems to have been a legend), the current Pope seems indirectly and tacitly to do so.

Whatever its basis in reality, clearly the case of minimizing the evil done to consecrated women who may be raped in an act of aggression is different in kind from married couples who engage in the marital act, but want to avoid a child.  It is under the voluntary control of the couple to abstain and control their sexual expression, an option not given to the nuns.

One is not sure what to make of all this, and I wish the Holy Father would limit himself to more controlled statements.  Whatever his interior meaning, he has left some level of confusion in the minds of the faithful, at least in those who are not conversant with the Church’s perennial Magisterium on these matters, and take the Pope’s ambiguous and somewhat incoherent answers in press scrums on airplanes as true teaching with which to guide their conduct.

I fear that the Pope’s ambiguous response may give support to what many Catholics, and perhaps many priests and bishops, already think:  That contraception is not an intrinsic evil, and in a proportional way may be used when the reasons are serious enough.  Already, current widespread practice of contraception amongst Catholics does not seem to differ significantly from the general population, and Catholic couples faithful to the teaching of Humanae Vitae are in the minority, to say the least.

Yes, sexual fidelity, chastity and continence are difficult, but necessary for growth in the spiritual life, indeed for attaining our final end in heaven. There are cases where one may be tempted to just throw in the towel and give in, but heroic virtue above and beyond the norm is sometimes called for, and we must soldier on, as befits true disciples of Christ.  I just wish the Holy Father would be more clear that the same message of heroic zeal he preaches for the environment must be applied also, and more so, to the far more fundamental realm of family life, marriage and sexuality, even in the most difficult of cases.  God is not stingy, and He always provides the grace to triumph over whatever obstacles or difficulties may be in our way, yes, even Zika and the possibility of microencephaly.