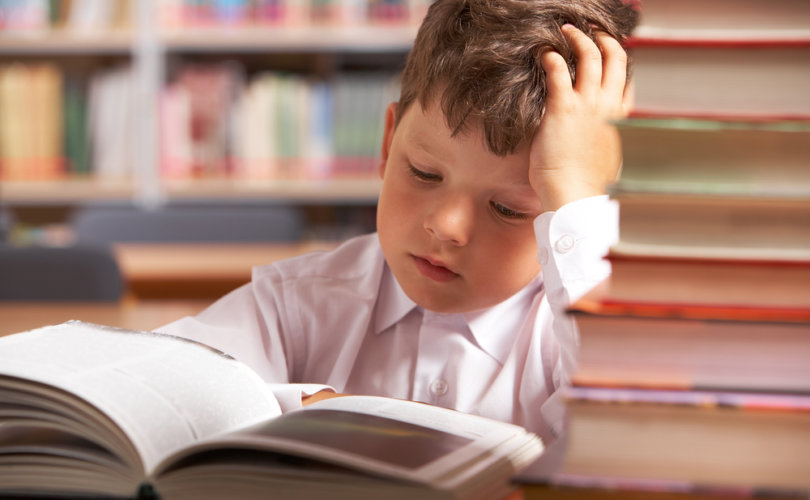 February 8, 2018 (The Bridgehead) If the progressive Left can claim one cultural victory that is nearly total, it is their infiltration and conquest of the public education system. Public schools across the Western world—especially Canada, the United States, and Great Britain—now serve as purveyors of post-modern ideology, replete with “social justice” classes and sex education that is designed to mainstream a wide variety of alternative lifestyles. The latest news on this front is out of the UK.

Announcing an ‘LGBT-inclusive’ update to all of its products, education giant Pearson has launched a guide to pushing ‘social justice’ activism in every part of the school curriculum.

‘Creating an LGBT-Inclusive Curriculum’ was produced by LGBT activist group Stonewall and is sponsored by Pearson, which owns the exam board Edexcel and publishes thousands of school textbooks as one of the UK’s biggest education companies.

Claiming an inclusive curriculum is “a crucial part of tackling” homophobic bullying in schools, the handbook advises ways in which teachers can alter lessons across the syllabus so LGBT pupils “see themselves represented in what they’re learning”.

Writing about the need to stamp out anti-LGBT bullying in a foreword to the guide, the senior vice-president for schools at Pearson UK, Sharon Hague, said: “LGBT students will only feel comfortable to be themselves if they also get to see themselves in their classrooms.”

You’ll notice that nearly everywhere, the same script is being used: If children, even very young children, are not taught about gay marriage and transgenderism and a whole laundry list of sexual practices, bullying will inevitably result. In other words, if you oppose this new curriculum, and you object to the idea that your children will be taught things that conflict with the values you teach at home—then shut up, bigot. It’s people like you that make kids kill themselves. Bible-believing parents are not being told that there is a mere disagreement, they are being told that they are dangerous. And that’s how you end up with children’s storybooks about transgender crayons and gay penguins—and parents being told they have no right to pass their values on to their own children. More:

Organised by subject, the guide lists suggestions to ensure LGBT visibility across the curriculum, for example recommending teachers set questions which reference homosexual relationships in maths and science, and introduce terminology specific to the lifestyles of sexual minorities in foreign language lessons. One example given is to begin a question with: “Two women would like to have a baby together, and the doctor recommends they use In Vitro Fertilisation (IVF).”

The vast majority of suggestions go far beyond issues of visibility and representation, however, with most of the handbook’s tips for creating an LGBT-inclusive curriculum promoting hard-left ‘social justice’ activism and identity politics in the classroom. Advice on teaching maths includes an example lesson in which children learn about codebreaker Alan Turing. Teachers are instructed to “provide pupils with some information about Alan Turing’s life, including the arrest and trial for his relationship with another man”, and to introduce a discussion on “the historical treatment of gay people by the secret services”.

In history lessons, pupils should “study the links between different social justice movements”, while art teachers are urged to “explore the way that art has been, and is being, used to effect social and political change, including LGBT equality, race equality and tackling climate change”.

…Pearson’s president for core markets, Rod Bristow, said the company will use the handbook to “help update our own products and resources to ensure they are LGBT inclusive”.

There has been some backlash, of course—not that it will be heeded:

UKIP education spokesman David Kurten stated that the “despicable” move is bad news for children and parents, who he pointed out will “effectively have no choice but to be exposed” to politicised education material due to Pearson’s position as the largest supplier of textbooks for schools, and the owner of Britain’s largest exam board, Edexcel.

“Maths should be about maths, it should not be about sexualizing children,” he told Breitbart London, warning the new textbooks will make it significantly more difficult for parents “to protect their children from the malign influence of left-wing identity politics”.

What a quaint idea—that math should be about math, and that English should introduce children to great literature, and that history should introduce children to their heritage. But of course, education is not so much in vogue anymore. Re-education is all the rage, because fixed truths are being turfed, historical heroes pulled off their pedestals, and the literary giants replaced with post-modern pipsqueaks. Grammar, however, might still be necessary—as well as memorization skills. Consider this, from the Washington Times:

Some members of the gay-rights community are adding the letter ‘K,’ for “kink,” to the ever-expanding acronym of identities. The official acronym is now LGBTQQICAPF2K+ according to the magazine The Gay UK. That stands for “Lesbian,” “Gay,” “Bisexual,” “Transgender,” “Queer,” “Questioning,” “Intersex,” “Curious,” “Asexual,” “Agender,” “Ally,” “Pansexual,” “Polysexual,” “Friends and family,” “Two-spirit” and “Kink.” The Gay UK said the acronym has been growing since the 90s “out of a need to move away from the limiting ‘gay community’” and to “encompass any community that defines itself as anything but heterosexual or cisgender.”

“Anything but heterosexual or cisgender”—huh, so exclusionary. Someone tell Canadian Prime Minister Justin Trudeau that he has been uttering the very limited and obviously homophobic “LGBT” all of this time, which clearly discriminates against a whole bunch of letters and is an offence to peoplekind in general. We can all expect the curriculums of public schools to change and evolve as fast as the LGBT Alphabet Soup is—and we can all expect parental protestations to be ignored.

If you don’t want your children to be indoctrinated, take them out of the public school system. It’s the only choice you’ve got.

Reprinted with permission from thebridgehead.ca.