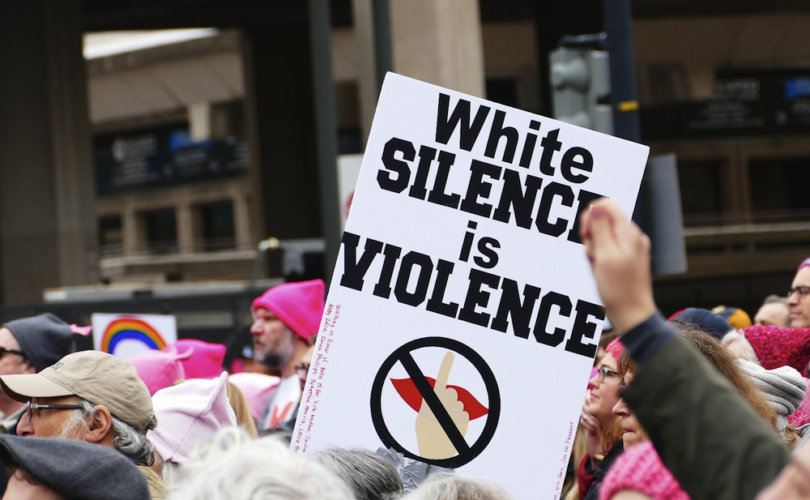 Protesters at the Women's March on Washington in JanuaryLisa Bourne / LifeSiteNews

January 28, 2019 (Catholic Family News) – I call heaven and earth to witness this day, that I have set before thee life and death, blessing and cursing. Choose therefore life, that both thou and thy seed may live…” –Deut. 30:19

Recently in Washington, D.C., a sharp contrast was on display in the streets of the nation's capital: The 46th annual March for Life (Jan. 18, 2019) and the 3rd annual Women's March (Jan. 19, 2019). From the banners to the speakers to the participants and general atmosphere, these events embody two radically different worldviews, as illustrated by the following video:

The vision and mission of the March for Life, held annually since 1974, are wonderfully simple. Organizers envision a world in which “the beauty and dignity of every human life are valued and protected,” with the practical goal being to “[e]nd abortion by uniting, educating, and mobilizing pro-life people in the public square.” And beginning with its founder, Nellie Gray (1924-2012), the March for Life has been a predominantly Catholic movement grounded in the divinely revealed truths of the Gospel.

Conversely, the Women's March – whose primary sponsors are the ACLU, Planned Parenthood, and the American Federation of Teachers (AFT) – is based on a 71-page “agenda” (political platform) containing striking similarities to the Communist Party USA's official program on issues ranging from “universal” (government-run) healthcare and “reproductive rights” (a euphemism for abortion) to special protections for the “LGBT community” and illegal immigrants. Judith LeBlanc, director of the Native Organizers Alliance and a longtime leader within the Communist Party USA, was actually a featured speaker at the inaugural Women's March in 2017.

In addition to ideological overlap, there are even similarities between the color schemes and propaganda styles of the Women's March and the former Soviet Union:

The Women's March Agenda 2019 (WMA), the product of “a group of 70 movement leaders” whose efforts resulted in a “set of 24 essential federal policy priorities,” begins with this declaration:

“Historically, protest movements are difficult to sustain. The raw energy of the people dissipates over time without an ideological frame to continue building power. In this moment of U.S. history, one that will likely be written books [sic] as among the darkest, we have lost the judicial and executive branches of government along with the Senate. Social movements are the only bulwark against the rising tide of authoritarianism, misogyny, white nationalism, racism, anti-Semitism, homophobia, transphobia, xenophobia, Islamophobia, ableism, classism, and ageism.” (WMA, p. 2)

Examples of the “urgent policy priorities” promoted throughout the WMA include the following:

Once again, it is clear that the March for Life and the Women's March espouse radically different worldviews, both of which are battling for the soul of America. Do we understand the spiritual significance of this epic struggle?

One of the oldest Christian documents outside the New Testament is called the Didache or Teaching of the Twelve Apostles (most likely written before A.D. 100). Its opening chapter begins by explaining, “There are two ways, one of life and one of death; but a great difference [exists] between the two ways,” and proceeds to describe the difference using Scriptural quotes and paraphrases, drawing especially from Our Lord's Sermon on the Mount:

“The way of life, then, is this: First, you shall love God who made you; second, your neighbor as yourself; and all things whatsoever you would should not occur to you, do not also do to another. And of these sayings the teaching is this: Bless those who curse you, and pray for your enemies, and fast for those who persecute you. For what reward is there, if you love those who love you? Do not also the Gentiles do the same? But love those who hate you, and you shall not have an enemy. Abstain from fleshly and worldly lusts. If someone gives you a blow upon your right cheek, turn to him the other also, and you shall be perfect. If someone impresses you for one mile, go with him two. If someone takes away your cloak, give him also your coat. If someone takes from you what is yours, ask it not back, for indeed you are not able. Give to everyone that asks you, and ask it not back; for the Father wills that to all should be given of our own blessings (free gifts).” (Didache, ch. 1)

The next few chapters (2-4) give detailed instructions on how Christians must live a moral life, reiterating the need to keep the Ten Commandments and providing the Church's earliest prohibition against abortion and infanticide (“you shall not murder a child by abortion nor kill that which is begotten”). Notice that the March for Life upholds these same Biblical principles and displays “charity, joy, peace, patience,” and other “fruit of the Spirit” (Gal. 5:22-23).

In chapter 5, the Didache goes on to list a litany of evils synonymous with the way of death, including several found among the Women's March, such as “deceit, haughtiness, depravity, self-will, greediness, filthy talking, jealousy, over-confidence, loftiness, boastfulness; persecutors of the good, hating truth, loving a lie, not knowing a reward for righteousness, not cleaving to good nor to righteous judgment, watching not for that which is good, but for that which is evil … not knowing Him that made them, murderers of children, destroyers of the handiwork of God …” These, of course, are reminiscent of “the works of the flesh” listed by St. Paul, which prevent souls from obtaining salvation in “the kingdom of God” (cf. Gal. 5:17-21).

In short, the two marches in D.C. were clear manifestations of what the Didache calls “the way of life” and “the way of death,” and there is no neutral ground between them. For the “two ways” are themselves representative of two opposing camps: one for God, the other for the devil, whom St. Ignatius of Loyola fittingly describes in his Spiritual Exercises as the “mortal enemy of our human nature” (Meditation on the Two Standards).

For the honor and glory of God, the salvation of souls, the good of the Church, and the sake of our families, we must all take an active role in this great battle of our times. It is truly a matter of life and death.

This article originally appeared at Catholic Family News. It is published here with permission from the author.